We started the day in a cramped wooden hut in Thailand’s Phayao province, waking at 04:10 AM to views over the Thai-Lao borders. We then ended it with unforgettable luxury and prestige on the banks of Chiang Mai’s River Ping. Just another of Thailand’s many fascinating contrasts in travel. For the weekend we would be set in the serviced suites of the Anantara Vacation Club, in a room near twice the size of our Bangkok condo, and also twice as luxurious. This was very much a celebratory stay having just arrived back from a seven-day road trip through Thailand’s nine northern provinces. And after seven days behind the wheel, the feeling of relief was almost unfathomable as we were whisked through the bustling streets of Chiang Mai, by limousine. We felt like we deserved it. So, for the coming days, we planned to do pretty much nothing but indulge in the luxuries around us. And, to be honest, it was really quite hard to leave the suite. 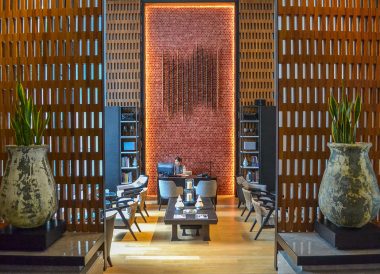 We did force ourselves out on the first evening, over the connecting bridge to the Anantara Chiang Mai Resort & Spa, where we started at the ‘The Service 1921’ restaurant, which is located inside a rather magnificent colonial house, originally built in 1921, hence “The Service 1921”. The former residence to the British Consulate of Chiang Mai,  which no doubt boasts a colourful past, is now themed around the old British secret intelligence service. And, foodwise, we keep it traditional to start, sharing some local Lanna food platters, including spiced ‘sai oua’ sausage, and the northern ‘nam prik’ chilli dips, along with ‘The Service 1921 Tasting Platter’ with chicken wings stuffed with glass noodles, which alone was a mystery. But I then venture off the traditional tourist menu (which is made easy with a recurring theme of Sichuan influences on the menu) opting for the hottest dish on the menu, a Sichuan style poached beef, laced with chilli flakes and mouth-numbing peppercorns, sharing ‘Mala’ influences which are otherwise tricky to track down outside of China, and more so to this standard. So curiosity gets the better of me, and I find that they have a Chinese chef in the kitchen, from the panda cuddling province of Chengdu. And while the Lanna food and appetisers are no doubt top-notch, the Sichuan influences were undoubtedly the highlight of the night.

Prestige on the Ping River

I won’t pretend to have left the resort either, because we did not, although we have been to Chiang Mai many times before, and to sum up the city in just one word, I would say “enchanting”. As the charm of the city is just so captivating that it keeps me coming back. But this goes more so in November when the city lights up and it is decorated for the famous Loi Krathong and Yee Peng cultural festivals. Celebrations which are somewhat centered around the River Ping, where the connection Anantara Chiang Mai Resort & Spa has its own private slice of serenity along the banks of the river. And the river is of course where much of the resort is focussed, where the infinity pool looks out over the passing river, and the colonial house stands as a piece of prestige in its surroundings. But the enchantment is no doubt best at sunset, when the lanterns are lit, and traditional Thai music plays and dance is performed in the courtyard, to share the true romance of Thailand. So we do spend a fair bit of time through these scenes, as the setting for our big breakfasts (Eggs Woodhouse please), and our much-missed Burger and Steak lunches, as sometimes we do need to indulge in some western comforts.

While we didn’t actually leave the resort, we were not completely inactive either. For a start, we did eat a lot, and we lounged around a fair bit at the roof top infinity pool area. But there’s also a whole load of activities available on the resort, so we decided to go toe-to-toe with the resort’s Muay Thai trainer, who had legs the size of tree trunks. But this unlikely scenario came after watching Muay Thai fighters, as young as 10 years old, fighting at an overnight temple festival in rural Isaan, something I wrote about in an award winning article this month in the Tourism Authority of Thailand’s 2017 blogger contest. Anyway, it was quite a surreal and visceral experience, which left me realising that 10-year-old kids could probably beat me in a fight. So I had to do something about it. Therefore the trainer taught me a rigid technical routine of punches, kicks, elbows, knees, and uppercuts, each time reminding me to hold the upper guard, which is trickier than it looks. I then went 3:00 minutes, non-stop, against his guard pads. And repeated, and over again. And while I aimed to capture my agony on camera, this proved tricky, given cameras are really hard to handle when wearing boxing gloves, but also the sheer ferocity of our attacks were just too fast for the camera lens. Bring it on ten-year-olds! Note, remember to bring the right attire if planning to do similar, as I managed to split my shorts on the very first ‘knee strike’.

We have stayed with Anantara before, and in the past we have always been somewhat confused between the hotel and the Vacation Club. So I looked a bit into it and the vacation club concept is not so different to the old timeshare model, where you pay up front for future holidays, at significantly reduced prices. Only with vacation clubs, there isn’t the continuous tedium of yearly returns to that same crappy Costa de Sol bedsit, they offer the choice of various Anantara Vacation Club Resorts, covering multiple destinations in Asia, and the brand is continually growing, as they are currently the largest and most luxurious Vacation Club in Asia. The club also works on a points-based ownership basis, meaning, unlike time-shares, there is a lot more flexibility in vacations, as they can be taken, or held, whenever it suits best. Ultimately we realized these vacation clubs are better suited to busy people, with families maybe, who don’t really have the time to plan and expedite convoluted vacations like we do. And “…maybe, if we have a bigger family, and the money…”, we might consider it one day. But for now, we will stick to our usual style of travel.