This would be our …. return to Kuala Lumpur, as I honestly can’t remember, because we just keep coming back. And while I often hear people say “there’s little more to KL than the Twin Towers”, this is very wrong, as we still find new gems on each and every visit to the city. And today’s gem is the newly branded Resorts World Genting, and the Awana Skyway Cable Car, which technically is not in Kuala Lumpur, but just 30 minutes out in the cooler climbs of the Genting Highlands. And the best route to get there would be via cable car, leaving the Awana Skyway Station, where a 10 minute ropeway takes you to the final stop at Resort World’s Sky Avenue Mall, a mall which alone is worth the visit. In fact there’s just a whole lot of new and exciting goings-on at Resorts World Genting, including the much-anticipated 20th Century Fox theme park which is soon to come. And it has become like a mini-city in itself, which I’ll come back to at a later date, as here I’m sharing our experience on the Awana Skyway Cable Car, and our escape to the clouds. 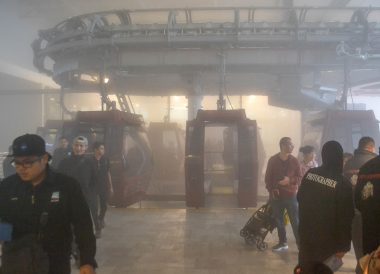 We actually missed out on the cable car upwards, opting instead for the bus to the resort. So, not to miss out, we instead boarded the Awana Skyway Cable Car travelling the opposite direction, leaving the top floors of Sky Avenue which is thoroughly thick in clouds. And while we have been on umpteen cable cars throughout Asia in the past, including supposedly the longest cable car in the world to Tianmen in Zhangjiajie China, this would be the first experience to start in the clouds. And we of course upgrade to the glass bottom gondola, just to make the ride all that more terrifying, so when the clouds open up, we see our feet dangle out over lush rainforest canopies and terrifying drops. It’s really quite extraordinary. However this cloud coverage is unique to this time of year (we travelled in August), when it’s seen as low season given the ‘bad weather’ only allowing for intermittent appearances of the otherwise iconic mountain backdrops that the resort is known for. But I do much prefer the ‘shrouded in cloud’ scenes, when it feels just unusually atmospheric and somewhat unworldly, when surrounded by thick mountain clouds. And this for me would be the main draw to these highlands, as we escape the otherwise unrelenting heats of the lower lands, and nearby cities of Malaysia, to the cool, clean, refreshing airs above. At the midway point we jump out to the doorstep of Chin Swee Caves Temple, which feels surprisingly local despite its far-flung location, as this would likely be the most prominent temple within tens of miles in the region. And it really is hard to miss on arrival with the towering 9-storey pagoda, and a 15-metre tall Buddha statue which keeps watch over the surrounding Sky Terrace. And again our visit is enshrined in cloud, which reminds me somewhat of winter temples in China, only the mists here are healthy and refreshing, rather than clogged with smog. Or maybe even the Himalayas, as rolling mists drift in and between the compound. In short, it doesn’t feel like we’re in Malaysia anymore, and feels like a long way from any urban civilization. Anyway, starting out we go explore the top pathways of the compound, where a network of caves follow the Chinese accordance of afterlife, with heaven, and a rather graphic and brutal depiction of hell. This should be lots of fun for the kids. And we then take an elevator from the terrace to the temple interiors below. 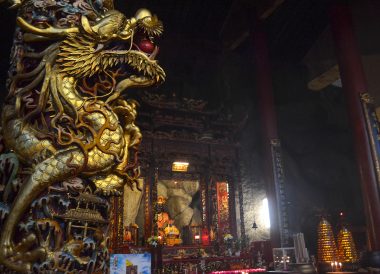 The lower tiers of the temple almost teeter over a sharp steep slope of rocks and primary rainforest, meaning the views really are quite spectacular from above. At least when the cloud coverage subsides. And the temple itself, which is Taoist, is of a religion I’m not overly familiar with. So this makes me more eager to explore. And arriving we find a busy and very loud scene, as we are welcomed by the deafening rattles of Chinese fire crackers, which echo through the temple halls. We are then met by the smell of burning incense and joss paper (aka ghost paper), where locals make offerings to ancestral spirits, to ensure they have lots of goodies in the afterlife. So again it is just surprisingly active and local this temple, and the experience it feels almost enchanting when shrouded in clouds and mountain mists. It is without a doubt a highlight of the highlands, and it’s of course free entry for all.