It is often a worry with hotel reviews that we may fail to find more to add to past experiences, almost expecting a copy and paste from past accommodations. Yet here, at Bangkok Marriott Marquis Queen’s Park, we find the complete opposite, as we are almost overwhelmed by the scale of what the hotel has to offer. But I did arrive with a backup plan, through reminiscing, as the last time we left these front doors was after an all night rooftop party on the building top’s helipad, almost 5 years ago. Because this building, formerly the Imperial Queen’s Park Hotel, has presided over the surrounding skyline for many years, only now it has become almost unrecognisable after a rather extensive and extravagant transformation. And now it feels like centuries beyond. I now have an odd feeling that I’m falling for Marriott Hotels, something I never thought I would ever say, and ironically it is for unlikely reasons. In the past we have always focussed more on boutique hotels, for design reasons in particular, as really we are not suited to small, and somewhat claustrophobic settings. But at the front entrance to the Bangkok Marriott Marquis Queen’s Park we are almost overwhelmed by the sheer expanse of the towering spaces which surround us. As, along with the prestige, the elegance in dress, and the forever captivating Thai smile at check-in, we find it hard to even leave the welcoming of the lobby. Yet there’s still much more to explore, given we had just entered what will soon be Bangkok’s largest hotel.

In many ways this stay was a sneak peek at what the Bangkok Marriott Marquis Queen’s Park will become, as the doors did open less than six months ago, and many of the facilities are yet to come. Yet the place is already huge, with two swimming pools and all sorts of bars, eateries and restaurants dotted through the lower floors and lobby. It’s almost like a mini city in itself. Our guestroom is found in the North Tower and is still pristine and polished, free from wear and tear, but we do find some unexpected recollection from the moment we stepped through the doors. This may have been the Japanese style plunge bath, or maybe the linear room design and rigid angles, or just everything being so well and purposely placed. As the design aspects are very similar to a previous stay at the Marriott in Osaka and this only brought fuzzy nostalgia of a truly unforgettable experience in Japan (although there are no washlets / robotoilets). And we actually found similar in Osaka where all the soaps and lotions are by Thann, a luxury Thai brand, so in many ways they bring the best of both worlds to their hotels, which makes sense as why change it when the formula works (as well as branding and economies of scale of course). Yet, through personalized stencils, accents and flair in design, the guestrooms do feel uniquely Thai, or at least contemporary, urban Thai, as we are in modern city settings. So, throughout our stay, there was only really one complaint, from Fanfan, who asked why the TV was so bright, and said it was like trying to sleep in a cinema. To be fair she was trying to sleep at the time, and I was wide awake watching the “A Team”.

I actually once lived on this street, my first ever rental apartment in the city just further down on Sukhumvit 22, and I would used the hotel at the time as a shortcut to Benjasiri Queen’s Park, which pretty much sits on the hotel’s doorstep. They are now in negotiations to renew this connection, with the reopening, which kind of makes the park an extension to the hotel. And Benjasiri Park, or Queen’s Park as it is better known, is easily my favourite in Bangkok due to its small, compact size and well maintained gardens of trees and art sculptures. Mornings and evenings being the better hours when the park comes to life with local life, joggers circling the central lake, aerobics, sepak takraw (Thai foot volley), and Tai Chi at the front gates. Some of the best people watching in Bangkok. And the area would be my all-rounder recommendation for staying in Bangkok, since the recent facelift, and rebranding of the area as a rejuvenated “Em District” now being dubbed the ‘Epicentre of Sukhumvit’. This started with a complete revamp of the malls adjoining at nearby Phrom Pong Skytrain station and includes the opening a beast of a mall, called the EmQuartier, which is rivalling the other big name mega malls of the Siam shopping district. The Helix food court alone worth the visit. So it is the new, up-and-coming shopping district of the city, yet unlike others there will always be a long going on street level, with variations of restaurants and nightlife and now there’s even something for the kids with the new Dinosaur Planet opening right next door. It’s just a very exciting place to be right now. 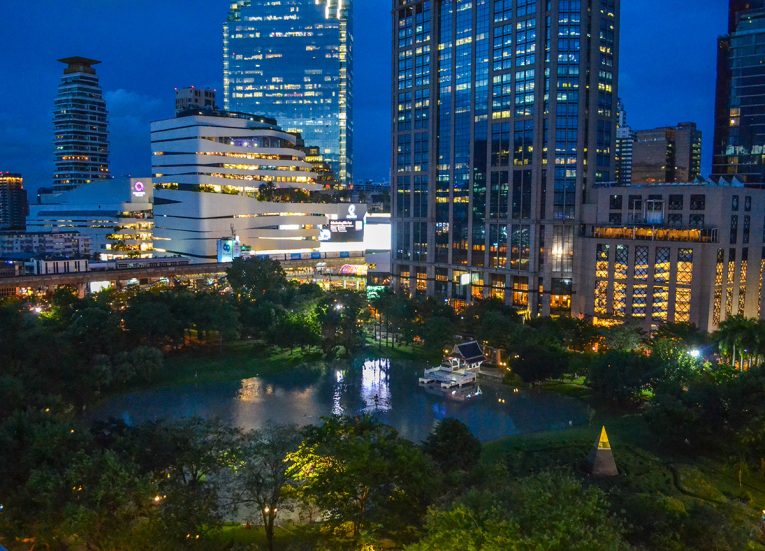 Breakfasts have always been more of a footnote in past reviews, but at the Goji Kitchen & Bar they have taken breakfasts to a whole new level (coincidentally the last time I said something similar was at the Marriott in Rayong). But I really don’t want to go into some long list of what to find at the pancake and waffle bar, the bagel bar, the cheese bar… so instead my focus will be more on a, hopefully less monotonous, list on the street food section. This is the ideal place to sample Bangkok’s iconic street food staples, from pristine clean counters, and without leaving the doors. A complete new to me and it felt more like an open air food court, than a buffet breakfast counter, or a theatrical performance even, where vendors would throw together many of Bangkok’s street food favourites. This starts at the front with the rice and noodle stalls, which serve on a rotation of different meats through the week, where on the first morning we find Khao Man Gai (Hainanese Chicken Rice) and Kway Teow Ped (Roast Duck Noodle Soup). And from there the selection is somewhat phenomenal ranging from the baos and shumai of Yaowarat’s Chinatown, to flaming grills of Sai Oua (Chiang Mai sausage), a Lanna staple from the north parts. But, given I live in Thailand, and eat this stuff daily, I find myself drawn to the international food sections and, during our two days stay, I managed to eat from China, to Japan, to India, and right across the globe. In short the Bangkok Marriott Marquis Queen’s Park has quite probably the best buffet breakfast in Bangkok.