With its unique Portuguese heritage Macau does host its own cuisine called Macanese foods which, as expected is a bit of a fusion between Portuguese and Chinese food. While this post does cover some Macanese foods, it does go wider covering mostly the simple snack food of Macau which are easy to track down and eat on the go. The type of food which works well for quick visits as I find most tourists and travellers to Macau are rarely there for more than a weekend, and many even call in for day trips from neighbouring provinces of China or nearby Hong Kong. Anyway, these are the more popular street food bites easy to find in tourist areas like the Ruins of Saint Paul’s and the Senado Square. But, since I can find most of these things in Europe, I find myself delving more into Chinese influences and Cantonese foods. Anyway, here are some of the east-to-find and best Macanese food and eating in Macau. 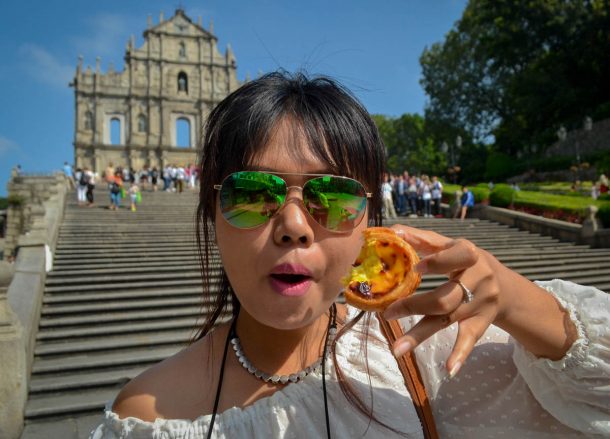 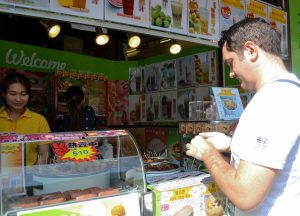 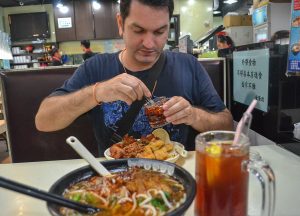 I’ve probably eaten my own body weight in egg tarts before first visiting Macau, yet both of us were actually wowed by our first egg tart there. Egg tarts in Macau are in a league of their own and I found myself, early each morning, running down to the local bakery for our egg tart breakfast. Then, on the way back to the hotel at night, I would grab another couple to go. But none did compare to our first Macanese egg tart which, ironically, was found in one of the most touristy spots of Macau, next to the Ruins of Saint Paul’s. Expect to pay roughly 10 Mops per tart. 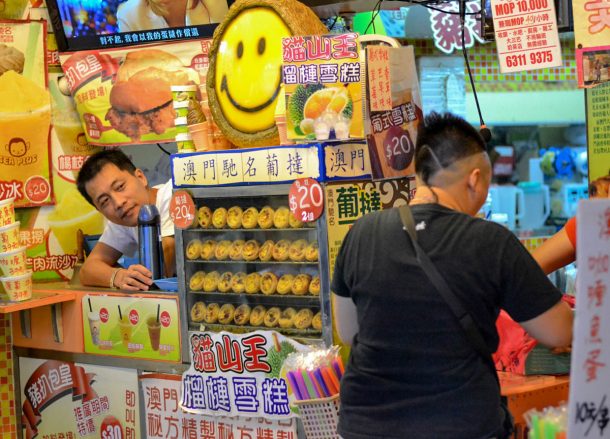 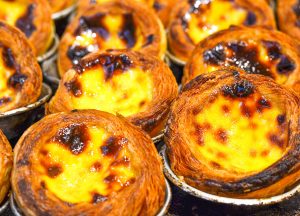 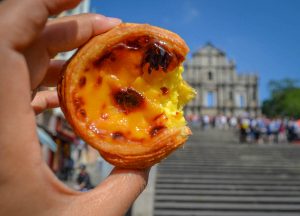 I’m really not one for sweet snacks (unless they’re egg tarts) so I wasn’t overly excited for almond cookies (or almond cakes as they’re often known). But they’re okay I guess. They kind of melt in your mouth and are a bit dry but they do taste rather well. To be honest I’ve never even bought them before but, and instead just made ample use of the free samples handed out in tourist areas. They are popular and easy to bring home as gifts and souvenirs. One of the more famous shops for these is called Koi Kei which are dotted throughout the more touristy areas of Macau. I really don’t know how much to pay, as I always just ate them for free. 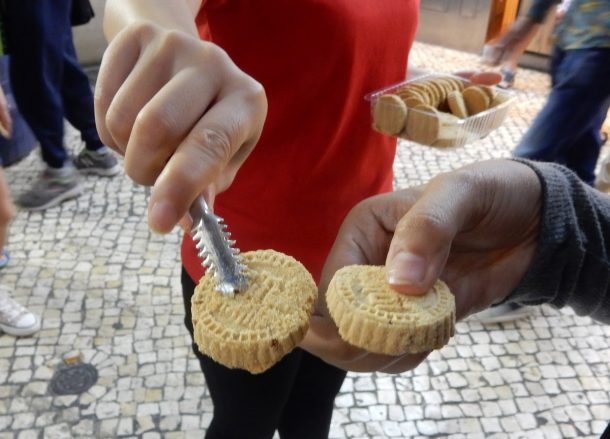 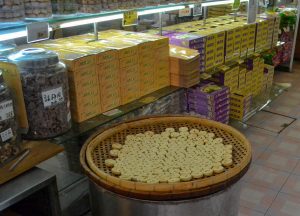 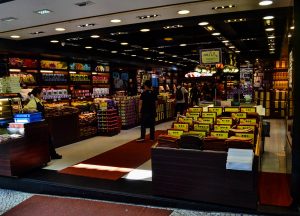 Sweet Pork Jerky is the commonly found jerky in Macau, although there does seem to be a jerky for every occasion. From the weird, like pork loin with abalone sauce, to my personal favourite of chilli tender pork jerky. Again free samples will often be handed out, alongside the almond cookies, and again Koi Kei are one of the easier to find shops to sample them. Other less common sample bites include egg roll and peanut crunch which, like the almond cookies, aren’t overly exciting. But I find with free food samples and complimentary casino shuttle buses, you could probably holiday in Macau without paying a Pataca. If  you do buy expect to pay around 80 Mop for one flat slab of meat. 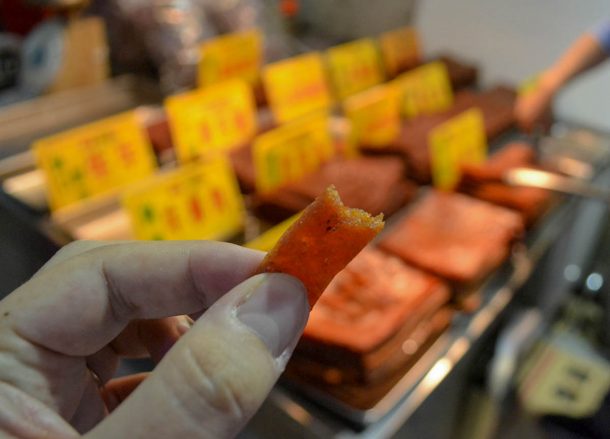 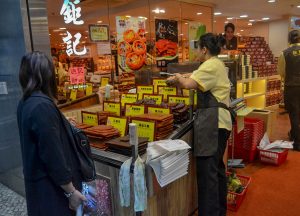 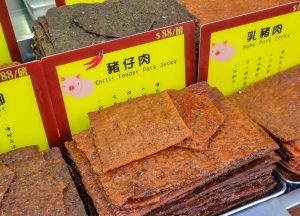 Literally a pork chop in a bun. Expect to pay around 25 to 35 Mops. 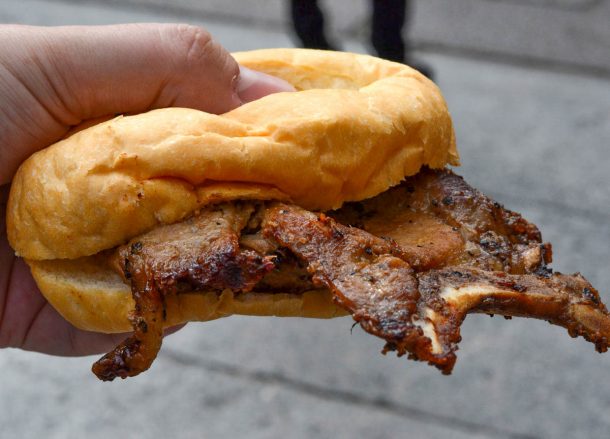 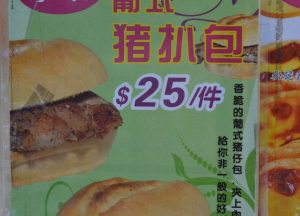 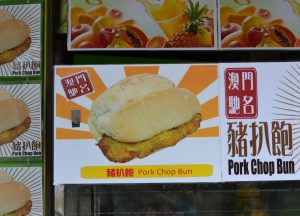 This is one snack I’ve yet to try in Macau, simply because I eat it a lot when living in Thailand, where it’s also a lot cheaper. For those new to durian it is a fruit common to Southeast Asia and it’s infamous for it’s somewhat rotten smell. It’s said to “taste like heaven, but smell like hell”. Fortunately the ice cream doesn’t replicate the hell smell so it just tastes like heaven. It’s apparently found at its best at McPherson’s Sweet Shoppe, again near the Ruins of Saint Paul’s. Just look for the mascot wearing a durian head. 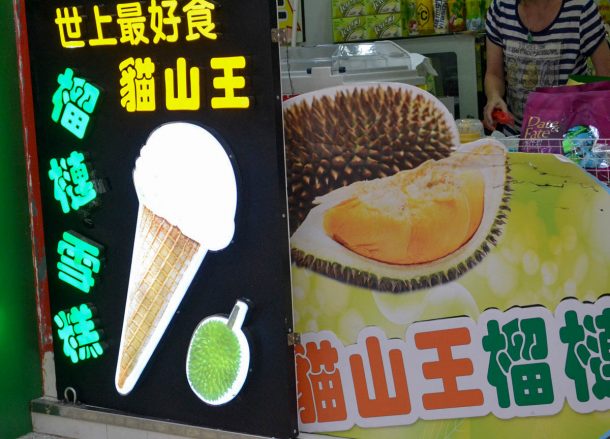 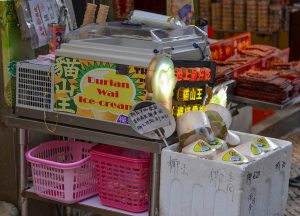 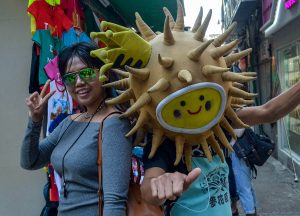 Curry is a well-known staple next door in Hong Kong where it is commonly served with fish balls, only in Macau there are much wider alternatives like sausages and meatballs and, more than not, beef offal. In fact beef offal with curry has become somewhat famous on a wee lane leading down from Igreja da Sé Cathedral where the beef offal curry is to die for (Kam Wai Beef Offal). I would always ask for extra curry, and then drink it from the tub. But similar curry is really easy to find in Macau, where it’s even sold in many of the local Circle K convenience stores. Expect to pay between 20 Mops, and up. Around 50 max, but it really depends on tub size and choice of  meats. 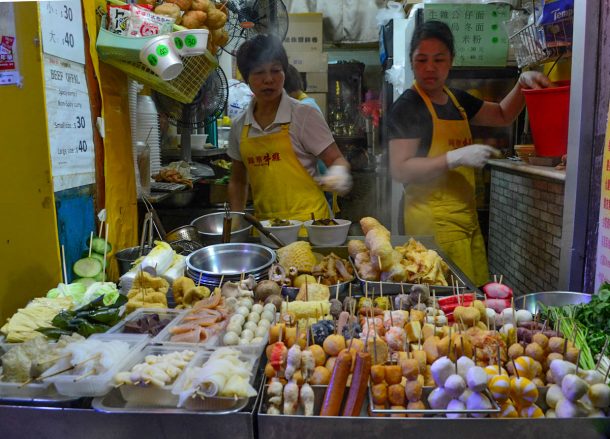 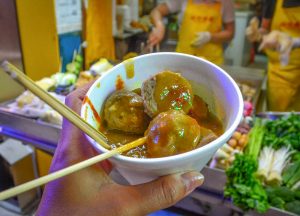 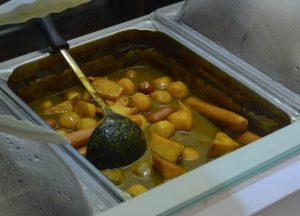 Also known as an egg puffs, bubble waffles, eggettes, pancake balls, pancake waffles, egglets, and puffles. These griddled egg leavened waffles are somewhat synonymous with snacking in both Hong Kong and Macau. In Macau I was even interviewed by some waffle obsessed school kids who wouldn’t stop talking about them, even when I tried changing the subject to egg tarts. But again I personally find them a bit boring and bland (again, I’m not one for sweets) although they are at their best when eaten still hot from the griddle. Chocolate, ice cream, and other flavourings, do make them better, but these apparently are only found in Hong Kong (so the school girls tell me). Pay around 10 Mops per egg waffle. 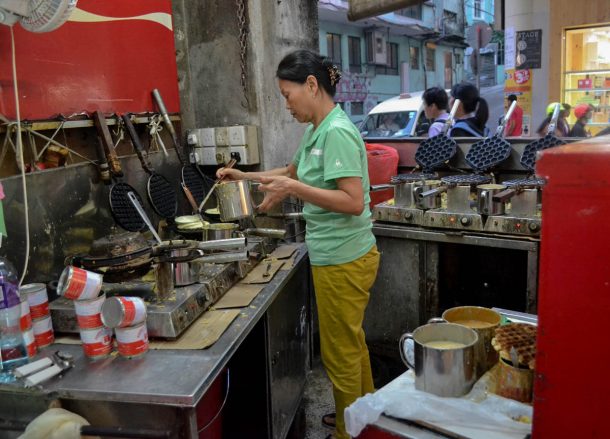 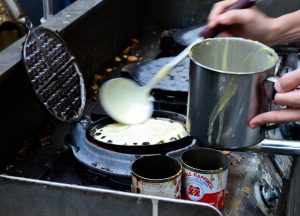 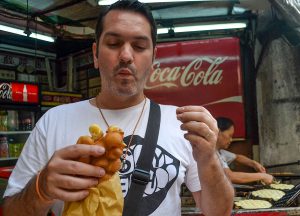 This is more of a personal obsession, as noodle soups aren’t so much a street snack. But I do like talking about them and I don’t think anyone should go to China without exploring them. Every time I am there I find myself on a bit of a noodle soup bender, where I typically go in search for those sensational mala flavours of Sichuan Cuisine. We did fail to find them on this visit to Macau but, along the way, we really did find some fantastic noodle soups. While occasionally we did find some outdoors snack stops, most of the best bowls were found indoors and were fairly huge. Expect to pay roughly 30 Mops for a biggy. 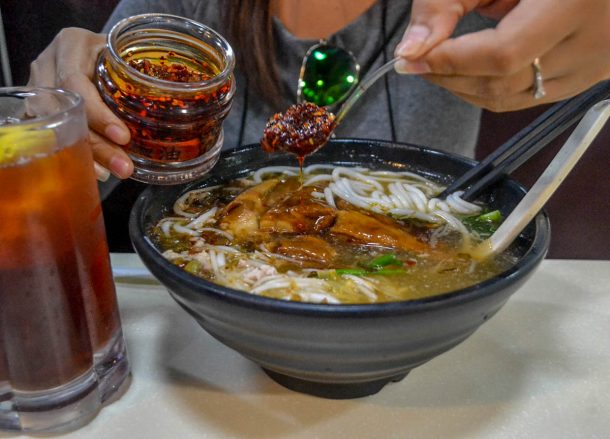 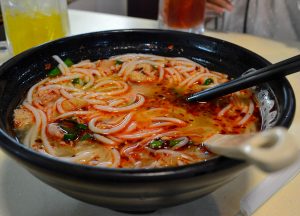 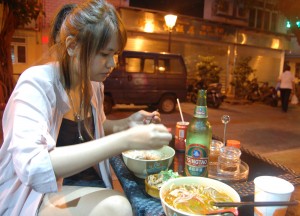