I’m really not certain if I’ve ever ate lobster before, although there was that one night in Bangkok, when I had a flight the next morning, and a whole load of money to get rid of. So I ordered the most expensive item on the hotel’s room service menu, which was “Rock Lobster”, but it looked more like a giant shrimp and it wasn’t lobster coloured. It was disappointing really, and I never quite trusted lobster since. Otherwise I was brought up in a relatively working class British background, so seafood for me was fish and chips, and lobster was ‘fancy food’. In fact the first time I ever ate crab was in Malaysia, on Petaling Street, in Kuala Lumpur’s Chinatown, which is a must as Malaysia (like Singapore) is renowned for its fantastic crab and seafood. So similarly my first ever lobster (bar that night in Bangkok) will also be in Malaysia, as we chow down at the ‘Burger and Lobster’ at Resorts World Genting (Sky Avenue Mall). A franchise from London, which started in an Irish bar on Mayfair, so I’m sure there’s some irony in there somewhere. Otherwise Fanfan isn’t new to lobster (fancy pants), which has brought conflict in eating opportunities before. Like when I refused an invite to Bangkok’s Crab and Claw because I worried I wouldn’t appreciate the food. But Lobster, alongside Burgers, and I’m in, all day, any day. 100%. As I could never turn down a good burger. So Burger & Lobster do make the ideal pairing for us, like a fancy ‘surf and turf’ and their simple menu makes it easy to order, where they have chosen just three different options, in three different categories. Three burger options, three lobster options and three lobster rolls. So excited for my first taste of lobster, I obviously order an “Original Burger”, in playing it safe, knowing I will also be stealing “Fanfan’s Chilli Lobster”. So, in short, the Original Burger (below left), follows the renowned recipe of its London origins, and it thankfully fits well in my mouth. As often these days I have been ordering massive burgers which I find myself deconstructing just to eat. But here they are smart, well-formed burgers but most importantly they are downright delicious. 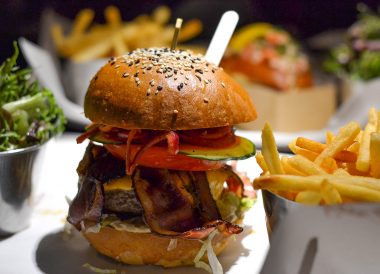 It’s All About the Lobster

So Fanfan ordered the ‘Chilli Lobster’ (above top) which is lobster served in a signature brioche similar to the renowned ‘Chilli Crabs’ famous in this region. It was an easy decision really, as the recipe is specific to the Genting Highlands branch, and it brings together the best of both worlds. The sauce (I am near sure) is a tomato based brioche, sweet and savoury, with a fiery kick of chillies. And it really is quite fantastic. So my first taste of lobster, while I wasn’t blown away, it will make a nice new addition to my eating repertoire (as I personally have never been fussed for seafood). Otherwise Fanfan loved it, and I always have the burger option. It was also less hands-on with eating than I had expected, where unlike crabs the soft meat is just so easy to pick out of the shells. And I didn’t get the chance to get messy. Otherwise the highlight for me was the overall dining scene, and the live lobster bars (which I don’t think would ever work with chicken or beef) and the “Big Boys”, the lobsters the restaurant are famous for, come in at around half the size of Fanfan. The Big Boy below for example was a magnificent 3.6kg.