This scam took place when my parents arrived to Colombo on a one-day port stop, when they were led by a seemingly genuine man from the US Embassy, to a shop in Colombo, where they were robbed of thousands of pounds. At the time my parents were spilt by the staff inside, and my mum was forced to buy gems which she had no interest in whatsoever. But she of course agreed to it (surrounded by 5 guys) simply because the prices seemed small enough to get away, and she was desperate to escape the situation. But to begin with she was convinced to buy 4 stones, for an unknown amount (she remembers it as being under £100), only the card was declined. So the shop dropped the price to include just one gem, and the card was then accepted. But what she thought was being charged in local currency was charged in dollars. And while she escaped thinking she only paid £14, she was in fact scammed of thousands of dollars. And there’s a lot more to it.

I can say I have been to Colombo or more times, yet I have barely set foot in the city, for many similar reasons. Scammers run riot in Colombo. So I will always go straight to Negombo when arriving to the Colombo airport these days. But this isn’t an option when arriving by cruise ship, where they are thrown straight into the mess of it all. Anyway, things got very serious in a few days time when we realised that the shop had charged in US dollars, and had emptied her account and put her into rather massive overdraft. I should also point out that my mum has joined me on travels through Sri Lanka before, and we literally bounced through similar scams in Kandy, like the silk markets, the wood carving, and them therapeutic rubbish (images below). It’s a good way to see local crafts for free. But we always go into these situations knowing that we would not part with any money beforehand. Only this time my mum was cornered, split from her husband, and forced alone. 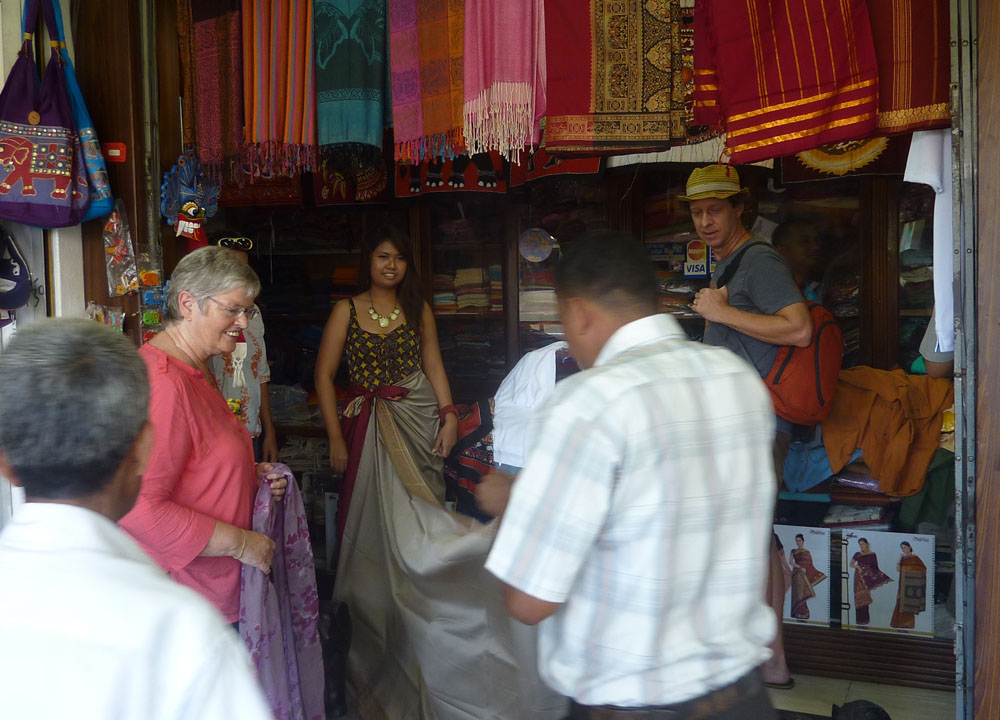 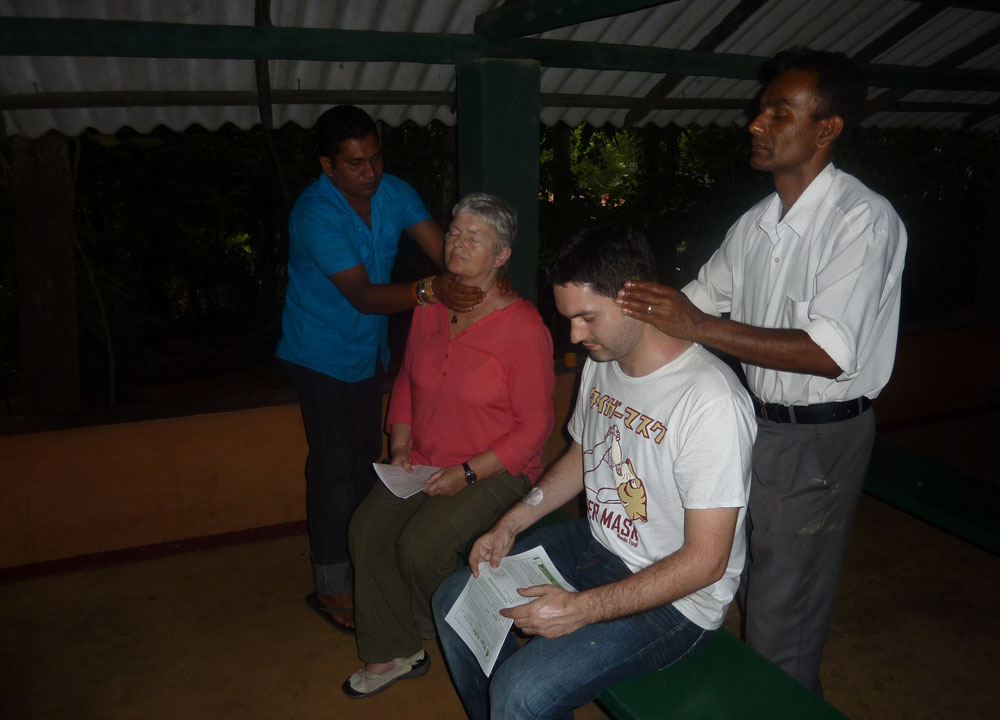 It was only after leaving the shop when she was able to worry about the original decline on her card. And because she couldn’t see any immediate scam at the shop in Sri Lanka, she thought that the money had been stroked from her account at an earlier destination. E.g. Malaysia (not likely), and Singapore (almost impossible). So she messaged me to check her card online, and to report any unusual amounts from the past days. Because she was only spending small amounts on fish and chips and whatnot during previous ports. But she wouldn’t realise the full extent of the scam until her next stop. As she realised that the shop had charged in U.S. dollars, instead of the local currency, where things had been listed like 3,000., with no symbols (she already had a fair grasp of local currency from the previous visits). I have also lived and travelled in Asia for 10 plus years now, and have never paid anything other than visas and duty-free in dollars. It’s certainly not expected.

First off, under section 75 of the new Consumer Credit Act, credit cards must provide protection for purchases above £100 and below £30,000. But my mum was on a cruise at the time, with no access to phone or internet, and was literally in Colombo less than 12 hours (being robbed as she would find out later). So before leaving she had left me her online details in case something like this did arise. So within hours of the fraud, I had checked into her account online, where I found a massive sum of money pending from the account, and her holiday balance in the minuses (they had £1252.57 in the account for the month ahead on the cruise and the shop had taken $3,000 US (£2131.23) instead of the roughly £14 she had expected. So I sent her a message about the situation, which she would not receive until her next port in Mumbai (4 days later), and the responsibility was then on my head. Fortunately I have dealt with similar situations in the past (on my own accounts, and I sorted them easily).

Don’t Bank on Your Bank

I actually received automated messages to the home phone on the same morning from her bank (Nationwide) of the scam telling me of potentially fraudulent transactions on her account. Which I originally thought was a scam to begin with (it’s hard to trust robot voices over the phone). But I was just led in circles, unable to speak to an operator, every time I answered the calls. Because I am not the cardholder. And the only option given was inputting a contact number for my mum who was on a cruise ship, in the middle of the Indian Ocean. So it was literally impossible to reach a human operator. So I phoned the bank instead (Nationwide) and was told that the only person allowed to deal with the situation was the account holder (which was impossible), and he didn’t even know that these automated calls existed, and assumed too that they were likely scam phone calls. So I asked if it is possible to report these things online, through “reporting unusual activity” on the account, and I was told that the transaction must be debited first. Which turned out to be wrong, as payments can be reported during a pending status (it shows on the 2nd screen). So the fraud could have easily been stopped on the day it happened.

The Longer You Leave it…

So meanwhile my mum was at sea, but we were welcomed with some relief 4 days later when the “Special Investigations Department” from her bank (Nationwide) issued a letter to the home address, saying that unusual transactions had been restricted on her account, due to potential fraud. Then things became very real when, for some reason, this restriction appeared to have been lifted, and the transaction went through. Literally on the same day of the receiving the letter. So I was straight on to report through online banking, by “reporting unusual activity”, which is when I found the option of reporting during a “pending status”. Despite being told that it was not possible. So the fraud could and should have been stopped on day one. And the process would only become more and more frustrating (I’ll get there).

How the Scam Works

The worst of all this, was that the “small” purchase was only ever made to get out of a frightening situation. Which started when my parents were approached by a seemingly genuine guy, claiming to be from the Amercian Embassy, and unfortunately my dad’s obsessed with politics (he’s worked in politics all his working life). But they followed along, still knowing it could be a scam, however he did seem genuine (I have followed many similar scams like here in China). But inside the shop, they were somehow split apart by the staff, and my mum was surrounded by around 5 local men showing her gems (there are gem shops at every corner of Asia yet I have pretty much no clue of values – that’s why they’re perfect for scams). But seeing that prices were not expensive in the shop, my mum agreed to a small purchase to escape the situation. However she was first pressured into buying 4 stones (still under a £100), and this was the purchase that was declined by her card. The scammers then scored out 3 of the items, leaving just the one, and this was the transaction accepted through VISA. For $3000. So it could have been a lot worse if her cash card/overdraft stretched that far. 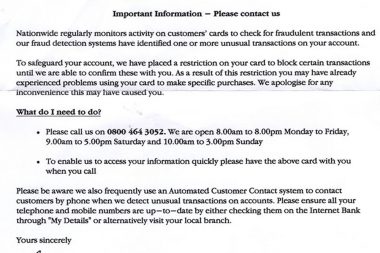 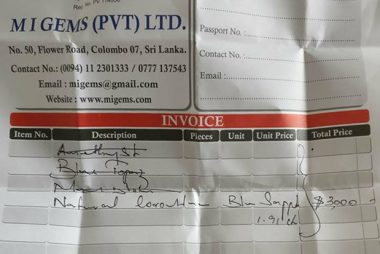 Fortunately the original attempted purchase, of 4 stones, is what revealed the actual scam. And I have shared the receipt (above left) that shows the $3000 was almost certainly added after the purchase (there was no mention at all before, obviously, or there’s no way she would have continued). So this is the exact same receipt as used for the 4 gemstones, where 3 have been crossed out. Yet there is no mention of the “Total Sum” for the 4 stones in the column next to them. This means the amount was not given before being processed and declined. Or the amount would obviously be shown crossed next to it. So this shows that they tried to charge the card for the 4 gems, and, I’m guessing, planned on adding the $ price to the receipt afterwards. And by doing this any claim of a scam or fraud is made a lot harder, to impossible. But, if anything, the receipt shows proof of a deliberate scam in this case. Otherwise the staff had only handed her the receipt, along with her cash card, when leaving the shop. Where she had been cornered by 5 men, in a completely new and overwhelming city, within hours of arriving by boat. It’s just a rather vile scam, and welcome to a foreign country.

The reporting was almost as frustrating as the scam itself (for me anyway. I never want to be in the same situation as my mum). So I continued to report the scam through the 6 messages through Nationwide’s online banking, who insisted they needed proof of the purchase. But gave no option of attaching what they were asking for. So I uploaded the documents to the cloud, which they then refused to open them. So the first proper contact with her bank was near 3 weeks later when they gave us an email to contact (on the 26/04/2018. The fraud was recorded on 06/04/2018) and every day counts in these situations. But they said they were unable “to raise a case” as the receipt shows $, despite pointing out (as above) that this was obviously added after the purchases were made. She also offered to ship the item back, a tiny blue sapphire, for a refund. As it was otherwise worthless to them, actually worse, a reminder of what they paid to get out a rather traumatic time in a confusing foreign country. To be continued…