Continued from London to Panama on a ‘Round the World Cruise’… On leaving Panama we headed south-west to French Polynesia. This was the longest single section of our cruise a distance of 5000 miles and nine days at sea. This time was probably the most relaxed period of my entire life. We had no contact with the outside world and did not see land or even another ship for almost eight days at the start of this Pacific Cruise. 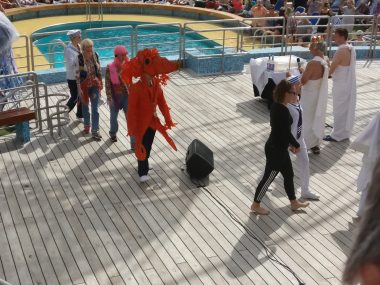 On 31st of January as we crossed the Equator we were joined by Neptune and his entourage of sea creatures. The ceremony involved punishing the members of crew and passengers who had offended Neptune. Their punishment involved kissing a fish and being ejected into the swimming pool. This was nearly disastrous as one of the crew was unable to swim and had to be rescued by her colleagues.

The sun shone strongly and the temperature rarely fell below 30 degrees and as I gazed across the sparkling blue Pacific I reflected on the marvellous vastness of the ocean. For a few hours the ships engine cut out and as we drifted aimlessly Coleridge’s Ancient Mariner came to mind and his description as idle as a painted ship upon a painted ocean.

Our first call in French Polynesia (day 32) was Nuka Hiva the largest of the Marquese Islands. As the tender approached the pier we could see the giant carved sculptures which dominated the port. On land we were greeted by local musicians and dancers in traditional dress and presented with strings of beads. 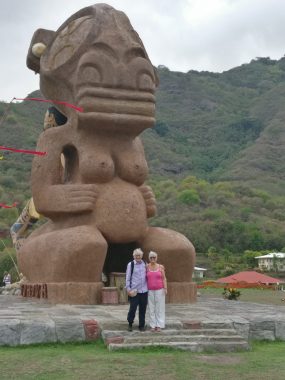 The islanders were happy and welcoming and their joie de vivre reflected the Gallic character of the island. This was reinforced by the prominent flying of the Tricolour and constant crowing of many cockerels. The blend of French and Polynesian cultures could also be seen in the beautiful Cathedral of Notre-Dame. This was a wonderful example of Marquesean wood carving with hand-carved doors and statues formed from native wood.

We went for a long walk along the palm-lined seafront and called in a pub for a drink and were surprised to be serenaded by a local group playing ‘You cannae shove your grannie of the bus’.

Our next call in French Polynesia was Papeete the capital of Tahiti. Whereas the population of Nuka Hiva is less than 3000 Papeete is a large urban area with a population of over 100,000. 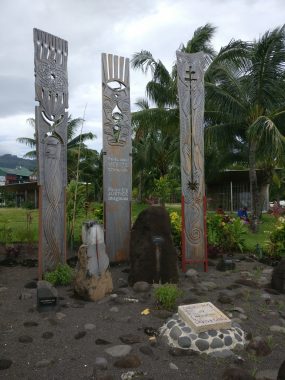 When we arrived in the early evening it was raining quite heavily so we decided to wait until the following morning before disembarking. It was the rainy season. The next morning was beautiful and very sunny. We walked the short distance into the town centre and loved the atmosphere of the market which displayed a huge selection of fruit and vegetables and freshly caught fish. Many of the stalls and small shops were selling black pearls for which the island is famous.

As we walked along the seafront and we could see an amazing variety of fish of all sizes and of many beautiful colours semi-enclosed in a glass-like aquarium which ran along the whole length of the harbour.

One of the most poignant sites on the seafront was the memorial to the thousands of test site workers who were displaced and whose health and environment are affected to this day by the French nuclear tests held in Polynesia particularly in the 1960s and 1970’s.

While we really enjoyed the visit I feel we not really see Papeete in its full beauty as by early afternoon rain returned and we retreated to a nearby pub. 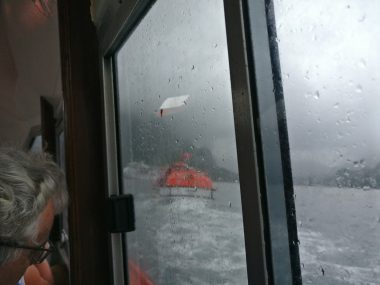 The following morning we arrived in the small nearby island of Moorea. There were no landing facilities so we anchored about half mile offshore and took to the tenders. The sea was quite rough and as we approached the shore it appeared that our pilot was taking a shortcut to the pier. Suddenly we heard a crunching noise as the tender hit some rocks. The pilot panicked and tried to reverse. This made it worse as we could hear the tender grinding over the rocks with the steering gone.

We were stuck on the rocks about a quarter of a mile from shore floating aimlessly. As we awaited rescue we kept our spirits up with rousing choruses of Row Row Row Your Boat and Michael Row the Boat Ashore. After half an hour drifting aimlessly another tender arrived attached a rope and slowly towed us back to the Columbus where our pilot was warmly greeted by the captain. 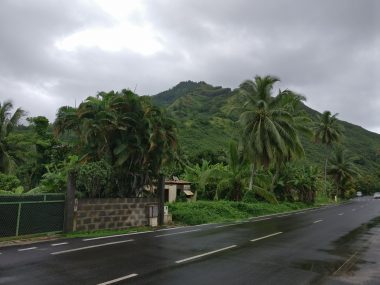 We took the next tender back to the Island and had a wonderful day exploring Moorea. We followed the road beside the beach lined with palm trees laden with coconuts and bananas and the bank which provided homes for hundreds of crabs who scuttled into their holes as we appeared. It was a beautiful walk so peaceful and quiet and an ideal opportunity to admire the many colourful and exotic plants and flowers along the way. Suddenly we came across the spacious grounds of the Intercontinental Hotel and spa. The hotel gardens bloom with hundreds of species of tropical plants and trees and lead to a turquoise lagoon teeming with sea life. There was also a beach and dolphin centre where guests have the opportunity to swim with the dolphins 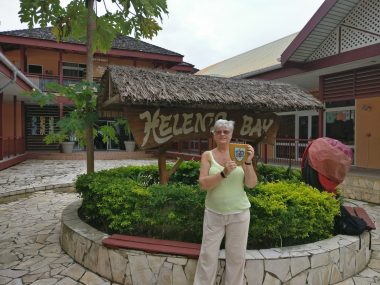 Our final French Polynesian destination was Bora Bora. This is an island 100 miles from Tahiti. It is surrounded by a lagoon and a barrier reef and contains an extinct volcano and is renowned for scuba diving snorkelling and as a famous honeymoon destination.

It certainly lived up to its reputation and we felt back at home when walking the palm-lined road we came across a centre called Helens Bay. At Bora Bora we took a trip in a glass-bottomed boat out to the coral reef. It was a wonderful experience as we passed over the reef our guide would appear below the boat with food for the fish and would soon be surrounded by multi-coloured fish of all shapes and sizes including sharks and a moray eel.

We left Bora Bora on the 11th of February and continued to sail south for the next 5 days. This was a busy time on board as we celebrated Rosenmontag German carnival beginning of lent (12th) followed by St Valentine’s Day (14th) and Chinese New Year (16th). In fact we crossed the International Date Line on 15th so the 15th did not exist and we moved seamlessly from St Valentine’s day to the Chinese New Year. There were complaints from some passengers that someone has stolen a day. Despite this, our bill included a deduction for gratuities on 15th.

Anne’s birthday was on the 13th we went to the Fusion Restaurant for a special meal to celebrate with Patti and her husband Americans who shared our table and also Anne’s birthday. 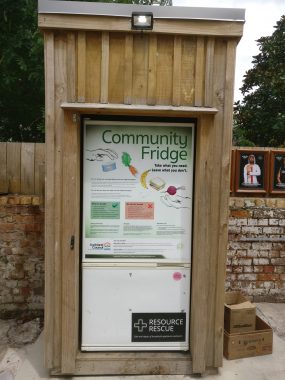 On Saturday the 16th (Day 44) we arrived in Auckland New Zealand’s largest city to commence the second stage of the round the world cruise. I really enjoyed our three stops in New Zealand Although Auckland is a major city with a population of over one and half million it manages to combine all the aspects of a modern economy with a relaxed simple life we enjoyed in the 1960s. The Economist rates it as the third most liveable city in the world. I would not disagree.

There were many aspects of the Polynesian/Maori culture incorporated in the city. When we arrived decorations celebrating the Chinese New Year festooned the main shopping area. There was a sense of a friendly and caring community illustrated by the Community Fridge where residents left food for the homeless, an area of raised beds growing flowers to encourage bees and the church grounds set aside for growing vegetables free to anyone who needed them. 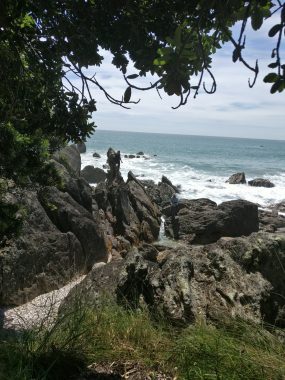 Like Auckland Tauranga in the Bay of Plenty manages to combine the benefits of a fast-growing business international trading and tourism centre with an attractive beach and seafront setting. We enjoyed our bracing coastal walk around the base of MT Maunganui an extinct volcanic peak on a peninsula close to the city centre. This coastal walk was also the route of a family fun run and we were met by hundreds of children/parents enjoying the outdoor life… It was a really friendly family atmosphere. 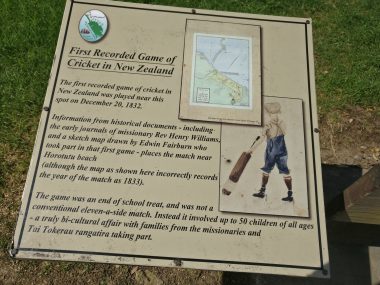 Our third destination was Waitangi on the Bay of Islands It is historically significant as it was here in 1840 that the Maori chiefs and the British crown signed a treaty which is the basis of life in New Zealand today. It was here that the Rev Henry Williams set up the Maori church and also organised the first recorded game of cricket in New Zealand in 1832 in which the families of missionaries and the local Maori children took part.

The Islands were so remote and peaceful. Ideal for relaxation.

We left New Zealand early in order to avoid the remnants of Cyclone Gita which had devastated Tonga and was heading for the South Island. Our haste was in vain unfortunately as a passenger became seriously ill and a helicopter was sent to take him back to New Zealand. We had travelled beyond the helicopter range so we had sail back for 3 hours until it arrived and removed the patient. This operation created great interest on board as the helicopter manoeuvred to lower the stretcher as the ship rolled in the heavy seas.

The next few days were the roughest of the round the world cruise. The gym was closed to avoid accidents but apart from this life on board continued as normal. 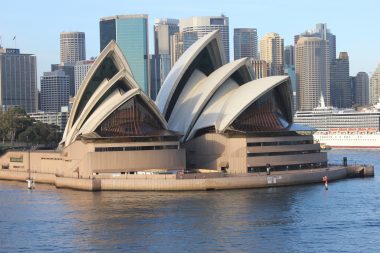 Three days later we arrived in Sydney (Day 51) here the pace of life seems to accelerate as we moved on from the relaxed atmosphere of the South Pacific. We followed the normal tourist agenda across the Harbour Bridge enjoyed the harbour Cruise, visited the Opera house and the magnificent botanical gardens. On our return from the cruise our bus drove off without any passengers and our local guide thought this was hilarious. We did not agree as we had to wait for more than an hour for the company to send a replacement with a result of that we missed the local show on the ship. 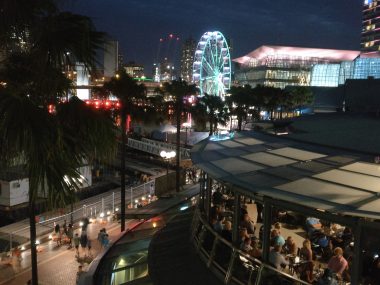 We had our evening meal on the ship and then returned to the city centre and headed to Darling Harbour. The atmosphere was great it was a hive of activity with tens of thousands of young people enjoying their Friday night out. 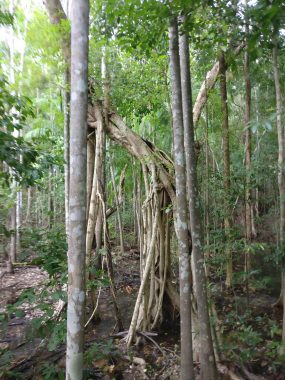 Our third destination in Australia was Darwin in the Northern Territories the home of Crocodile Dundee. We decided not to go on the excursion to see jumping crocodiles but instead visit the territory wildlife park to experience a tropical rainforest and enjoy the wildlife which inhabits it. It was amazing to see so many beautiful and rare birds in their natural environment.

During our visit Australia and New Zealand we noticed the passengers were becoming younger and rowdier. Some of the passengers from Tilbury had left us to fly back to London or extend their holiday Down Under and were being replaced by Aussies heading to London or Singapore.

Darwin was, in fact, the 60th day, halfway through our round the world cruise (full post on Australia here).