There are a number of options for getting to the Harry Potter Studios in London but, for short-stay tourists like us, we found the easiest route is by bus from the Victoria Station area. This was after quite a bit of deliberation, as at £31 for return tickets, the bus is a bit of a rip off. In fact, it’s similar to the price of the actual tour tickets on the Warner Bros. website, but, all in, the money is worth it. The studios are located outside of London, near Watford, and alternatives for getting there, aren’t really great. The cheapest option for travel would probably be the train from central London; travelling to Watford Junction, where there are regular shuttle busses to the Harry Potter Studios. But we opt to pay the extra, and cut out the unnecessary hassles and uncertainty. There are bundled ticket options as well with Golden Tours website for the Harry Potter Studios tours, and another perk is that they guarantee you’ll be at the studios on time. This is reassuring given there are assigned times for each Harry Potter Studios tour. Just type in the tour time on the website and they’ll tell you which bus to get. 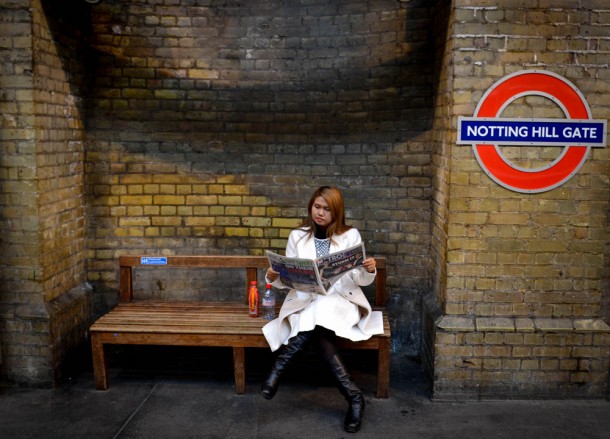 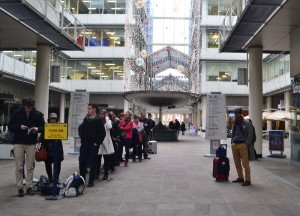 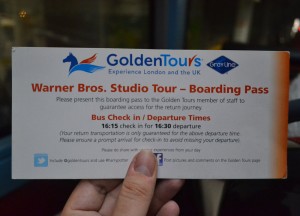 The buses leave from ‘Fountain Square” found near Victoria Underground Station, on the yellow circle line. This area is huge however and (after getting lost) we find the easiest way is to follow the signs for ‘Victoria Coach Station’ where you’ll pass through the Fountain Square mall. This is pretty much opposite the Victoria Coach Station. So we find the Golden Tours counter and queue for the coaches. We arrive with no printed tickets, for anything, which is no problem as we’re given these on arrival, along with a return journey voucher with assigned times. The assigned return ticket is more of a guarantee if coaches are full on the day (which is rare) and, on our return journey we travel an hour earlier than assigned with no trouble. We also get off at the alternative stop of Baker Street station (again on the yellow circle line). It’s all quite easy. The bus journey isn’t quite as exciting as the Knight Bus (Prisoner of Azkaban). There’s no Stan Shunpike and it’s pretty much a normal bus other than the Harry Potter print on the side. They do play Harry Potter movies on-board which helps with that magical Harry Potter feel. 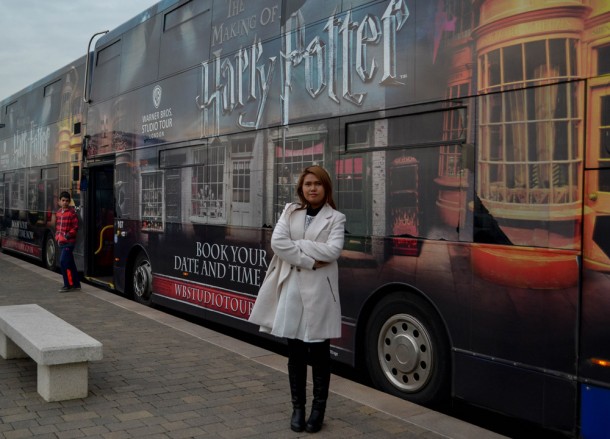 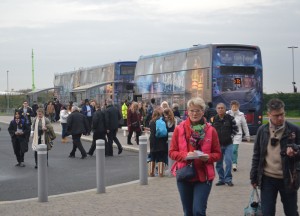 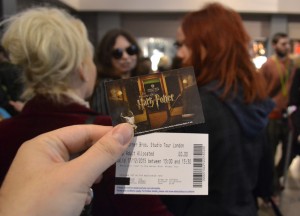 There are options of touch screen ticket machines and manned counters at the Harry Potter Studios, and we again arrive with little more than a reference number. We have our tickets printed from the machines, then queue for our assigned tour time. For this post I actually planned to sum up the entire Harry Potter Studios tour but it isn’t really possible. Turns out that it is the filming location for every one of the Harry Potter movie, with all the original sets, props, costumes and workshops from the get-go. There’s just far too much to cover. Because it is called the Warner Bros. Studio Tour London, I wasn’t really certain about this, but it is 100% Harry Potter. With allotted tour times I also thought we’d have to follow a fully guided tour, but only the first short cinema screening and introduction to the Great Hall are guided, before we’re let loose in the studios. You could explore all day if you want. 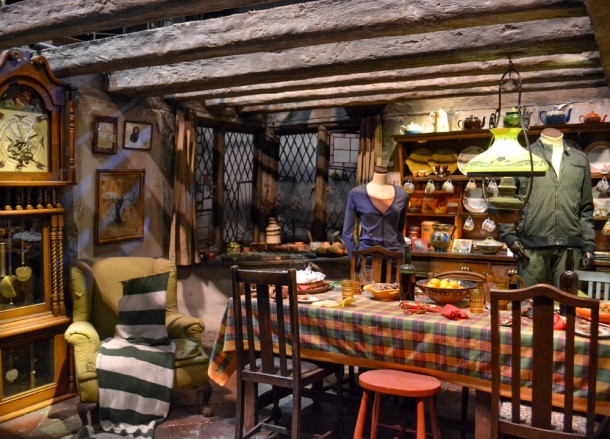 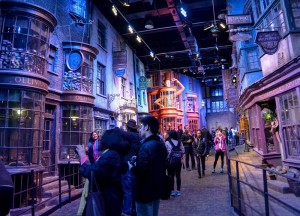 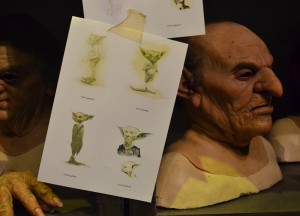 This tour was obviously chosen by Fanfan, and I was more of a straggler, brought along to take photos and romance. Actually, we saw the Harry Potter Studios tour posters on our last stopover in London in 2012, and it has been on the top of the to-do list since. She’s a little obsessed. But I was slightly concerned for the crowds, and the accessibility to different scenes. In the end this wasn’t really necessary as, other than the popular pay-for-attractions, like the Nimbus 2000 green screen, and pints of Butter Beer, there wasn’t really much to queue for. We were pretty much walking up to each set and scene and snapping photos, before moving onto the next. This maybe because of the limited sizes of tours, and the sheer size of the whole studio. 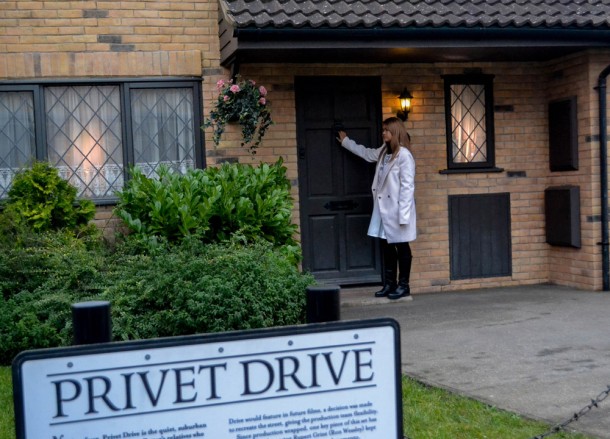 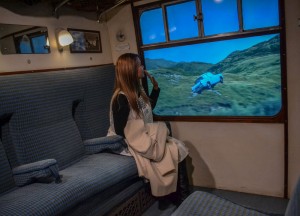 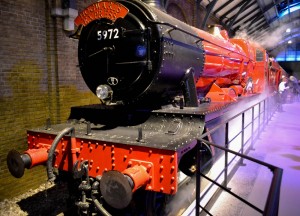 Hogwarts in the Snow

We are also here during the run up to Christmas where sets have transformed into festive winter scenes. The Hogwarts Great Hall is decked with Christmas trees, reefs and Christmas dinners (not eatable) and fireplaces are lit throughout the tour, with workshops showing how to make artificial fires and snow. With the outside scenes, such as Privet Drive, artificial snow is also sprayed from cannons and I thought it was actually snowing outside when I first saw it. But the highlight of the tour, as expected, is Hogwarts castle model (which is used for nearly all exterior shots of Hogwarts) which is all covered in snow. This is the great thing about the Harry Potter Studios tours. It’s an attraction you can keep coming back to, and the set designs will be recreated and decorated throughout the different times of the year. “Ghostly Goings-On” at Halloween sounds fun. 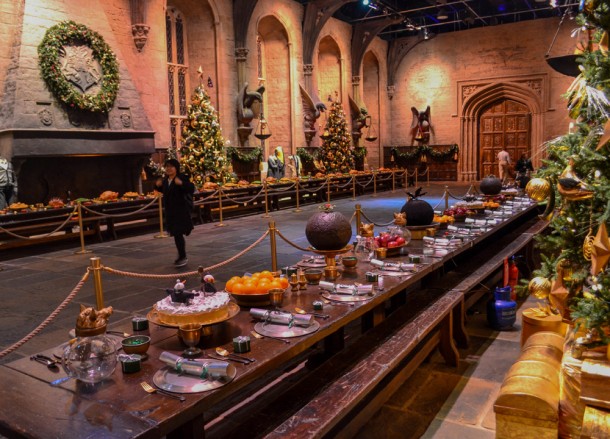 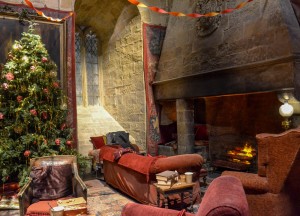 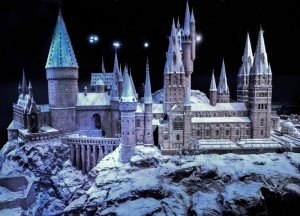