Despite the island’s close borders to Thailand, I find the Langkawi Geoforest Park tours have more in common with the eco adventures of Borneo, than they do with the generic island hopping tours in Thailand’s Andaman Sea. Which is undoubtedly a good thing, as not only are they less crowded and annoying, but the tours at Kilim Geopark are a lot more diverse in sightseeing and nature. As they just share a wealth of experiences which are unique to only these shores of Malaysia. So it’s not so much beachwear and snorkelling on our tour with Resorts World Langkawi, as it is comfortable clothing (although beachwear is fine). And while eco-tourism can be a bit hit-and-miss at times, the diverse sights and wildlife of Langkawi are pretty much guaranteed all day and year round.

Langkawi is somewhat synonymous with eagles, and the island’s landmark eagle sculpture greets you on every arrival and exit to the main pier at Kuah. In fact the name Lang Kawi itself translates, loosely, as “Eagle Rock”, so it would be almost rude to visit without witnessing them. And the main feeding grounds (or waters, I guess) would be the first stop on the northeast of the Kilim Geopark where two different types of eagles nest in surrounding canopies of the trees. Here the most common by far, are the Brahminy Kites (aka red-backed sea-eagles), which circle above in numbers of around 20-25. Then, holding back in the cover of canopy, are the rather massive White Bellied Sea Eagles which later join the feeding fray. The tour boats would then open their motors, to shake up the waters a bit, before throwing in a handful of chicken skins for the eagles to feed on. The eagles then all swoop down for a beakful of eagle grub. Although our boat refuses to feed the eagles, as chicken skins really are not the healthiest of diets for the eagles, and our tour is set on being more eco-friendly. 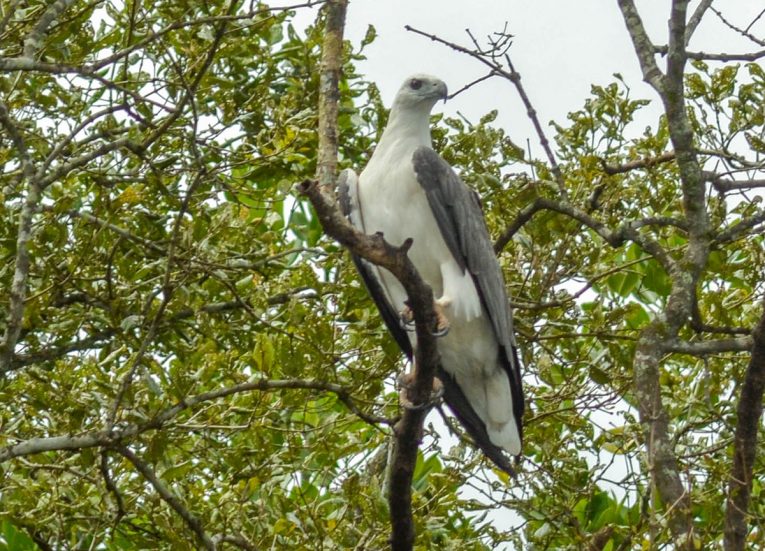 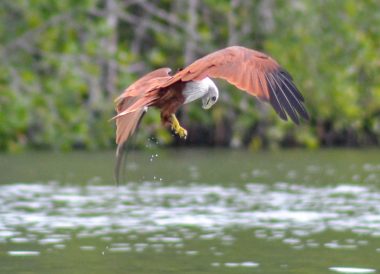 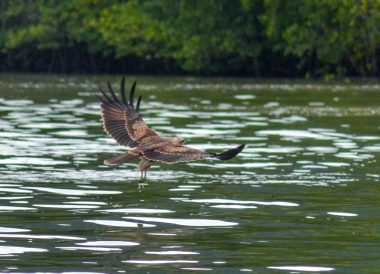 The second stop on the Langkawi Geoforest Park Tour is found in a calm pocket of the mangrove river where we find a group of crab-eating (aka long-tailed) macaques jumping around in the lower branches of the mangroves. And while I’ve seen hundreds of these macaques in the past, I don’t think I’ve ever seeing them swim before. Which really is quite adorable. But these crab-eating macaques don’t seem to be fussed for eating crabs, as they instead swim out to be fed monkey nuts, crisps and cheesy poofs from the passing boats. Again we may not be offering them the healthiest of diets, but they’re not exactly being force-fed. And they do get up close, and somewhat mischievous, like macaques are well-known for, where one even scaled across from a neighboring boat to jump across to ours. But they don’t seem set on stealing things, and instead put their hands out, politely, so passengers can feed him. 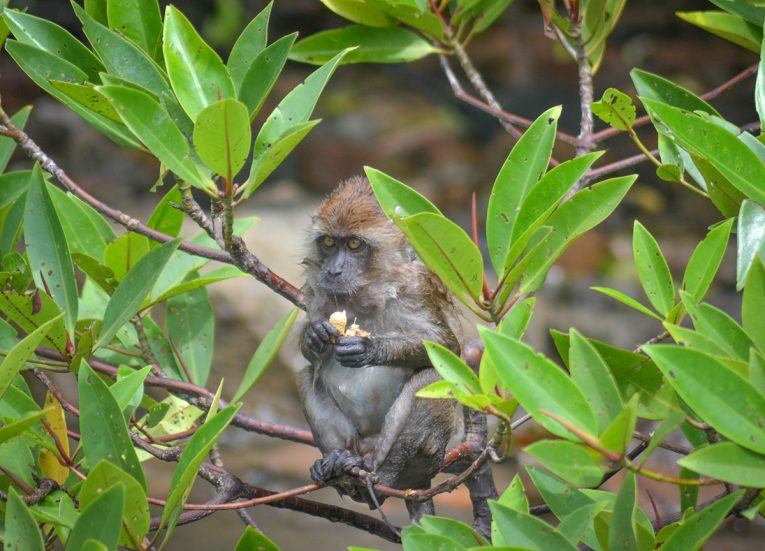 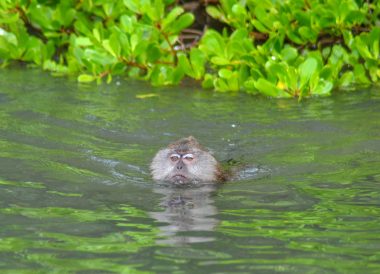 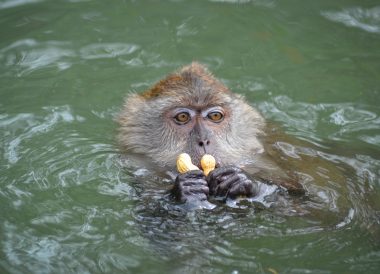 Life in the Mangroves

The above attractions were the sales pitch for the Langkawi Geoforest Park, which means pretty much everything else was unexpected and came as a surprise. Like the adorable Dusky Leaf Monkeys (aka Spectacled Langur due to their white eye patches) which are famous for their bright ginger babies during the right season. Then there was the stop at a bat cave, which as expected, was full of bats. And a completely unexpected stop was when we passed a deadly pit viper which the driver spotted sleeping in the branches of surrounding mangroves. And another to tick off the list was the groups of giant Fruit Bats which hang high in the tree tops of the rainforests above. But much of the overall fun for me was just darting through the dense mangroves, and between the picturesque karsts and archipelagos, in the back of a speed boat. The scenery is just unforgettable. 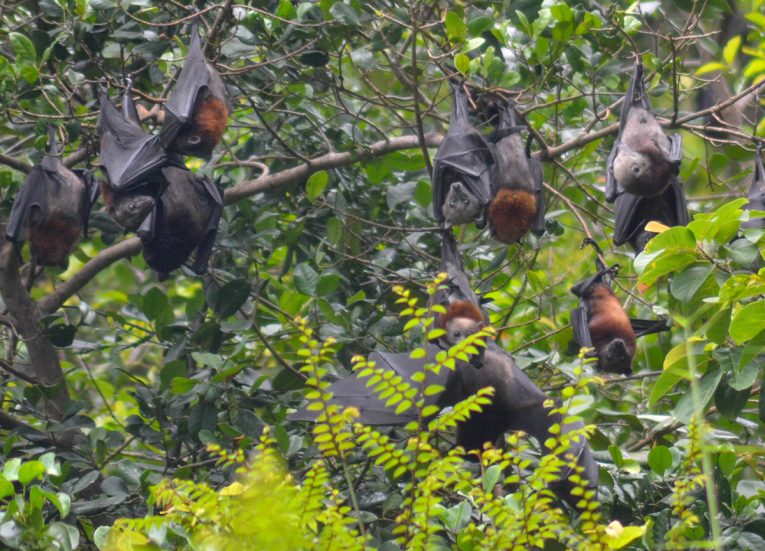 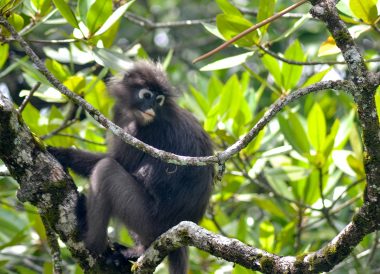 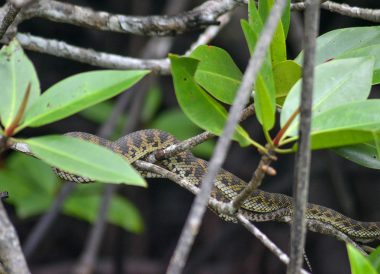 And the Usual Stuff

This was in fact our second time to tour the Langkawi Geoforest Park, where each visit we opted for different excursions, and last time we made more of the opportunities on the islands and the empty white sand beaches which are dotted throughout. As there are just lots of ‘beach paradise’ photo-ops along the way. And you’ll of course get up close with the coral fish, feeding the Sergeant Major Fish, which is pretty much a given with any island hopping tour in this region. So there is just a whole lot of excitement and adventure crammed into the day tour, with our final stop at a fish farm for some local cuisine, beneath the backdrop of fantastic karst views. We then made our return journey to the pier, and shuttled back to Resorts World with plenty of time to prepare for the evening’s sunset cruise. So overall it was just an eye-opening adventure, and it would honestly be wrong to visit Langkawi, or Malaysia even, without ticking a few of these experiences off the list. 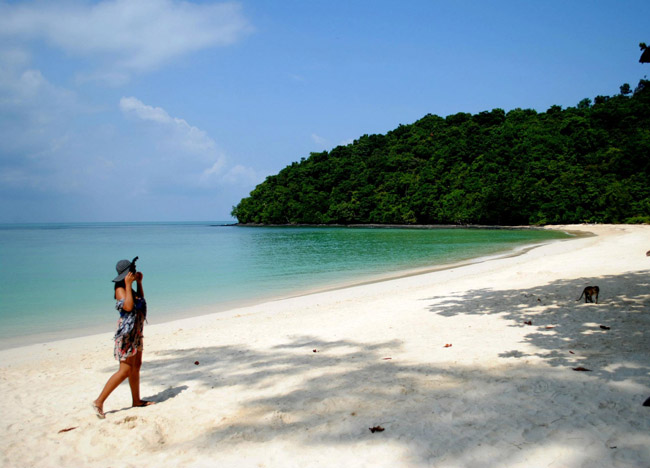