In the past I have written about living and local life from Bangkok’s central Sukhumvit area, to the far riverside areas of Nonthaburi. But there is a hell of a lot of Bangkok in between. And while I have always thought of these areas as Bangkok’s suburbs, they are more outer districts as they really don’t feel suburban at all. These outer districts are still well built up as sprawling urban districts. I won’t pretend to be an expert in these areas, but I have come to know them relatively well on passing and at one time we near moved to Ratchayothin, in the Ladprao district, when Fanfan studied a degree in applied arts at a University nearby (Sripatum). At the time we even searched for condos and were very close to a straight swap between our Sukhumvit condo and the top floors of Wind Ratchayothin. Only it fell through last minute. More recently, with Fanfan studying Law at Ramkhamhaeng University, we have stayed occasionally in the area of Bangkapi. And most of this post will be based on our most recent experience where we recently AirBnB’d an apartment in the Lumpini Badindecha-Ramkhamhaeng apartments. 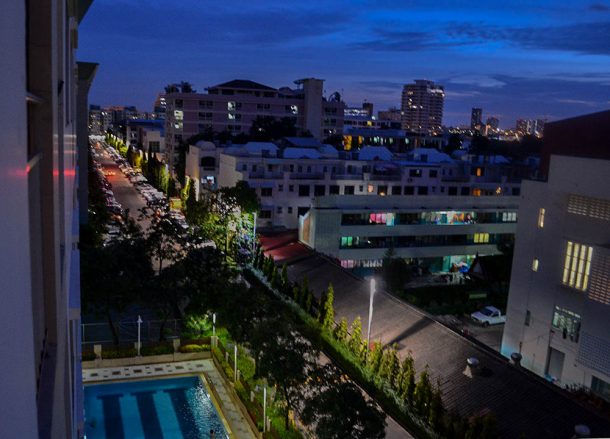 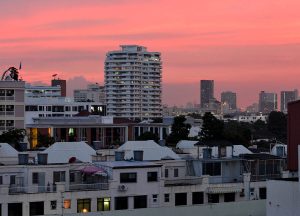 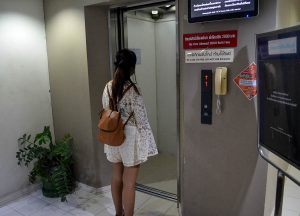 I think Lumpini apartments will always be a good starting point for any condo search in these suburban area, as they are generally huge developments, and they are found in most outside districts of Bangkok. These developments are typically low rise, with up to around 10 floors, but there will always be plenty of rental units in almost every suburb and sub-district (e.g. Lumpini Ratchayothin, Lumpini Bangkapi and Lumpini Badindecha-Ramkhamhaeng where we stayed). For a quick search try DDproperty. Anyway, where we stay it is like a mini town in itself (coincidentally beside the town in town area of Bangkapi) and it’s roughly 1km from the front entrance to the back. Some people use motorbike taxis just to get around the compound. One bedroom apartments in these places cost from around 5,000 Baht /month upwards. This cheap accommodation is undoubtedly the biggest perk of living in Bangkok suburbs and sub-districts. Also, another of the bigger budget options, is Supalai, which again have become popular in these outer districts. There are of course smaller developments, standalone housing and community options, but the bigger developments always make a good start for comparison. 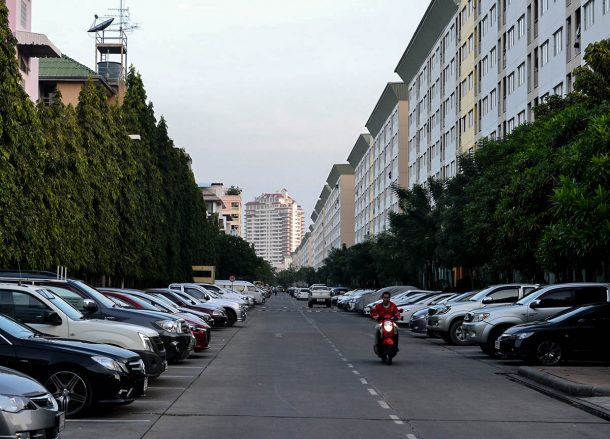 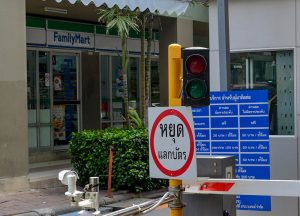 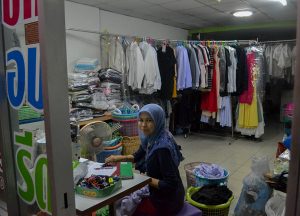 The large apartment complexes, like Lumpini and Supalai, would typically have all the necessary living facilities within the same grounds. These facilities would include 7-11s and family marts, cheap cafes and Thai food, coin operated washing machines and laundry services, traditional massage, beauty parlours, barbershops and whatnot. These facilities would normally be found on the ground floors and, while older developments might have them at the entry and exit gates, the newer developments often have them within almost each building. Security is also quite tight in these larger apartment blocks with security gates at each entrance as well as security card access for each building and occasionally floor. They’re also likely to have a gym and communal swimming pool and while I didn’t ever get round to using mine I did noticed there is a fee for use of both at our Lumpini apartments. Otherwise these costs are typically includes in the monthly maintenance fees. Each day I would also eat and the local onsite restaurants usually with the standard Thai food and cheap eats. 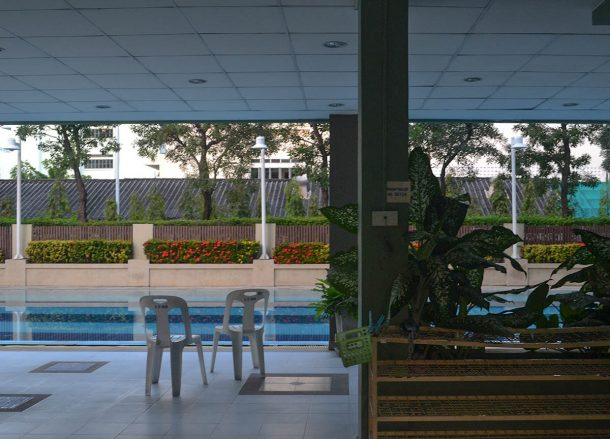 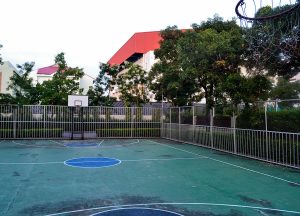 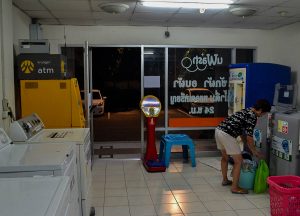 What isn’t found on the complex will always be found nearby. There should always be a Tesco Lotus or similar in the area, and there’s almost guaranteed to be an air-conditioned mall, with McDonald’s and all those chain brands, within walking distance. Actually these suburban areas and outer districts would often feel centered around the big mall of the area and to name a few of the bigger air conditioned malls there would be The Mall (Bangkapi), Fashion Island (Minburi), Central Plaza (Ladrao), and the Major Cineplex (Ratchayothin). Then there are smaller malls found throughout these days, both open air malls and air-conditioned malls, which appear on almost every semi-major street. Again they’ll have all the well-known chain stores and usual necessities of modern living. Otherwise normal street life is just typical to Bangkok. It won’t be as built up or touristy as the central area but they’ll have the same shop house restaurants, street food, with Familymarts and 7-11s in between. 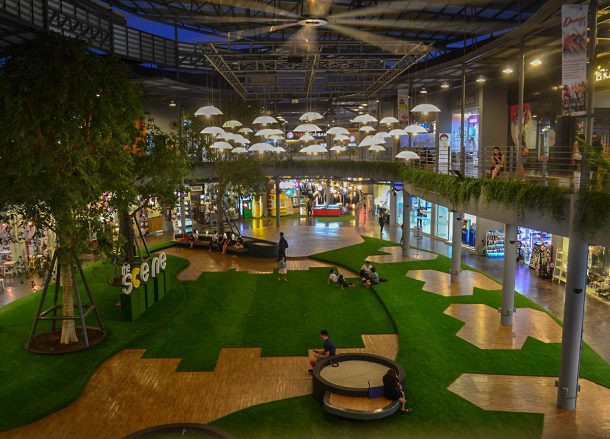 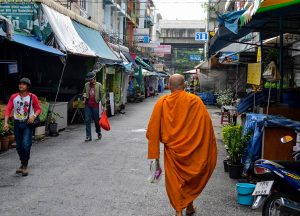 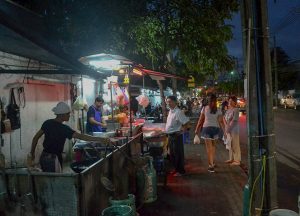 Many of these areas will be hard to navigate where traffic during peak times can be chockablock. So even nearby journeys can take their time and most of these areas are still cut off from the convenient Skytrain (BTS) or Underground (MRT) lines. Often the quickest route to the city centre will be travelling by the airport express, which again can take its time. Otherwise, Udom Suk BTS (Bangkapi) or Lat Phrao MRT (Ladprao) are some of the closest stops (although expansions are planned to most outside areas soon). But, having lived central, with the BTS and MRT interchange on my doorstep, I have never until now thought of using canal taxis and waterways. I am still new to them but, apparently, they can take you right up to Petchaburi MRT and the back of Central World, among other convenient stops, with not much fuss (or chockablock traffic). But it may take time to get used to the smells on the canals. Otherwise motorbike taxis and taxis will do for the short distances and, at least at our Lumpini Apartments, it looked like pretty much everyone owned their own transport. 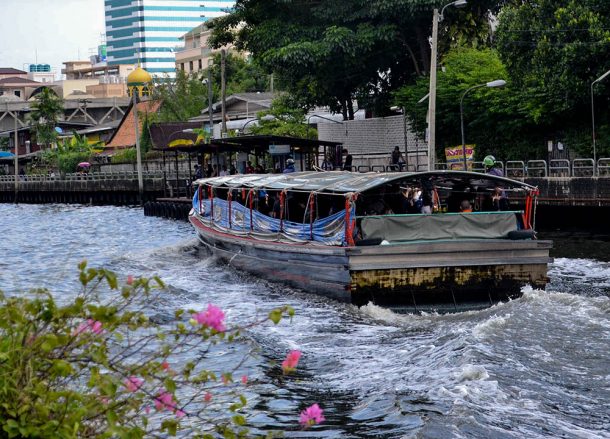 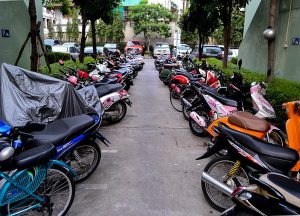 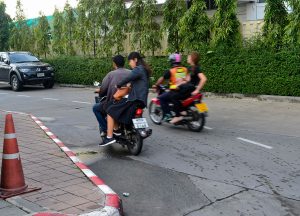 These areas really aren’t my forte, but I think I did get the gist of them through my occasional visits to the suburbs. I also met a mate once who lived in Minburi and he brought me out to the two local expat bars which were pretty much specific to only western expats only and felt quite surreal. There will be all sorts of nationalities and backgrounds out in these suburban areas (although many will be teachers) and, in the evening, they’d just call in for a beer, bite and banter, and do what expats do, I guess. On our recent stay in Ramkhamhaeng we did eat out each night as well and, surrounding, we found a young, modern, and somewhat hip night scene, with open air eating and lively street life. There would also be night markets in each area, or two nearby, and we found ourselves on a night out eating and beering at Talad Hua Mum. To be honest I preferred the nightlife in these areas, rather than the more raucous, seedy, and tourist littered bars of central Bangkok. It just felt a lot more relaxed and given these are fairly studenty areas, with many of the big universities found outside center, if I were still young and single, I would definitely rather be here. 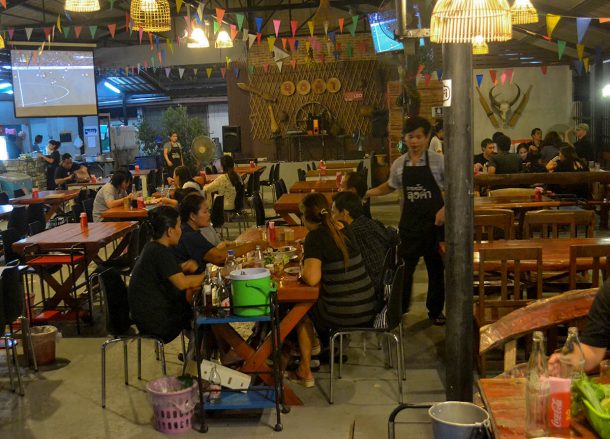 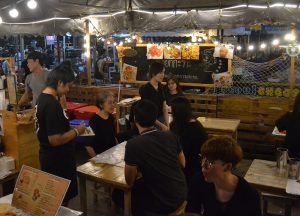 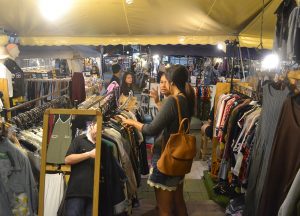 Limitations with Living in Bangkok Suburbs

I do feel somewhat removed from Bangkok’s cenral areas and, while we’re not exactly stuck in the suburbs, I find visits to the centre are more like weekends or a night out thing. But because these suburbs and sub-districts are a bit like cities within cities, the central areas don’t add much more to find. The centre is just bigger and, arguably, better. But life feels more relaxed and less overbearing in the suburbs. It’s a lot less high-rise and it feels somewhat local, with less of the annoying tourist and expat tack. There isn’t much English written here, on menus etc, so it is more challenging. So, once I had come used to the smells of the canals, I was out early every morning for a stroll along the banks (in search of Pokemon of course). And I already miss life there. Anyway, otherwise, I can’t really think of too many benefits, of living in the central areas of Bangkok. At the same time, there aren’t huge benefits of living in the suburbs of Bangkok. Because, after accommodation is paid, the cost of living is very similar. Taxis are the same price, eating is the same, 7-11s etc. There isn’t much saving otherwise. 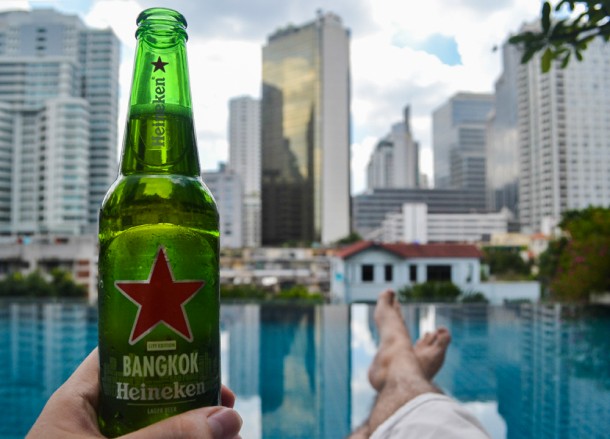 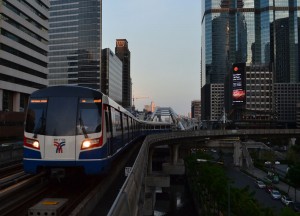 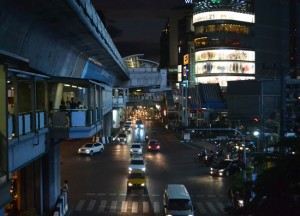