I have now covered this route a bunch of times through the years, having travelled overland from as far as Singapore, up to the northern regions of Thailand in Chiang Mai. Which is like one extreme to the other. At the same time, I have covered travel from Malaysia to Thailand over three different border crossings, including Langkawi to Satun by boat, and the road border at Dannok / Sadao, but I will forever recommend travelling from Malaysia to Thailand by train. With the crossing at Padang Besar on the Thai border. But I will include alternative options along the way. Otherwise this shows the most direct route starting from Kuala Lumpur in Malaysia, including the major destinations along the way, to as far as Bangkok. And the video below shows similar travel in the opposite direction, from Bangkok to Penang, including the same trains, transport, and destinations along the way. Maybe watch it in reverse.

The first stretch from, Kuala Lumpur in Malaysia to the Thai border, is by far the most comfortable since the trains in Malaysia have become quicker, more comfortable, and much more efficient, with the introduction of the ETS (Electric Train Service 2015). And now the journey takes around 5hrs 30mins to Padang Besar (at the Thai border), with two or three journeys scheduled per day (full timetable and booking here). But, personally, I would break up the journey to Thailand, with a stop at Penang (connection at Butterworth station) where there are more frequent connections (10 trains per day) with Kuala Lumpur (full timetable and booking here). All trains leave from KL Sentral Station (KL Sentral hotels here) which connects with the LRT and Monorails of Kuala Lumpur (our Kuala Lumpur Guide here). 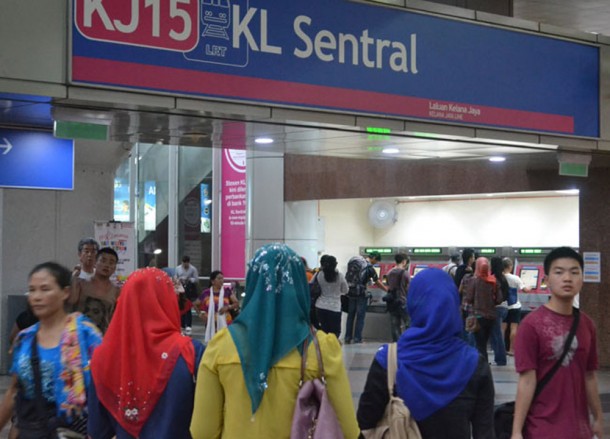 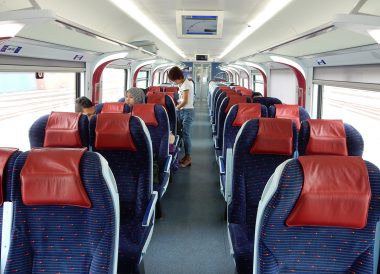 I almost always follow this route (as highlighted in the video up top) but fail to find much information online about the route. For example, online bookings do not include (at the moment) the ETS trains which pass through Butterworth (I shared my own photo below), and there’s very online about the Komuter trains which travel relatively regularly (almost hourly) between Butterworth and Padang Besar for the Thai border (here’s a decent timetable). The Komuter trains do take longer (2 hrs) than the ETS (1hr 30mins), and are fairly uncomfortable with subway-like seating. But they are cheaper (around 11 RM vs. 29RM for ETS) and they’re easier to schedule for onward travel at the border with Thailand. For example, the ticket below shows my ETS train would arrive to the Thai border at 15:15PM, yet the departure of the only overnight trains was at 17:40PM. So I was twiddling my thumbs at the border for 2hrs 30mins. It’s therefore best to check onward times from the Thailand border timetable here (normally 17:00PM). 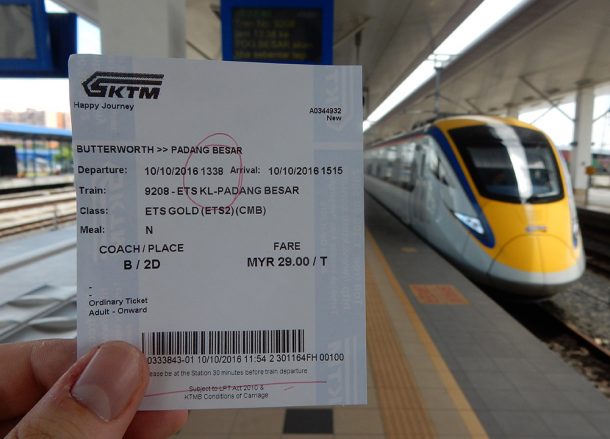 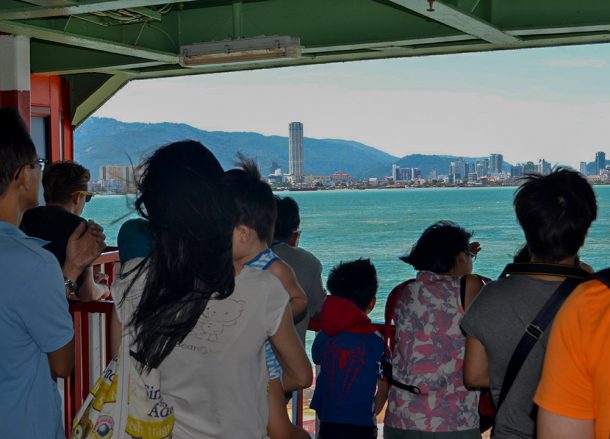 A Stopover in Penang

For those planning on a stop in Penang (I’d give at least a couple of nights), from Butterworth Station, it is an easy 5-minute walk to reach the pier for the ferry crossing to Georgetown (Penang). Just follow the red signs saying “Feri”. The ferry to Penang then costs just 1.2 RM, and the journey takes roughly 20mins. From the arrival pier (Weld Quay) I would suggest just crossing the road the main street just left and opposite (Chulia Street) and following it until you reach the main tourist stretch of Georgetown (Nearby Hotels Here). There are of course taxis at the pier, but don’t expect them to use meters, and expect to pay a fixed price of no more than 15RM through the nearby Georgetown area. And just to make it easier I have included my a video showing the walk from Butterworth Station and the crossing to Georgetown, Penang.

This is where things have changed recently (2015) where normally Thai trains would travel between Butterworth and Bangkok, with a quick border bordering crossing at Padang Besar, where passengers would disembark and board the same train again. But since the upgrade of the Malaysian train system to ETS (Electric Train Service) the Thai trains can no longer cross the border. Meaning a transfer between the two train lines is now necessary, disembarking at the Malaysia side of the border, before crossing and buying new tickets for travel on the Thai side of the border. Which includes a relatively simple, 10-minute, out-and-in border crossing, stamping out of Malaysia, and stamping into Thailand, given the correct VISA (Thai visa application in Penang here). Therefore it is best to arrive to Padang Besar within an hour of onward travel leaving Thailand. As there’s pretty much nothing to do in-and-around the border station, and there’s no air-con either. It’s not a great place to wait around. 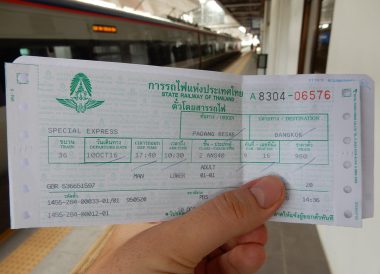 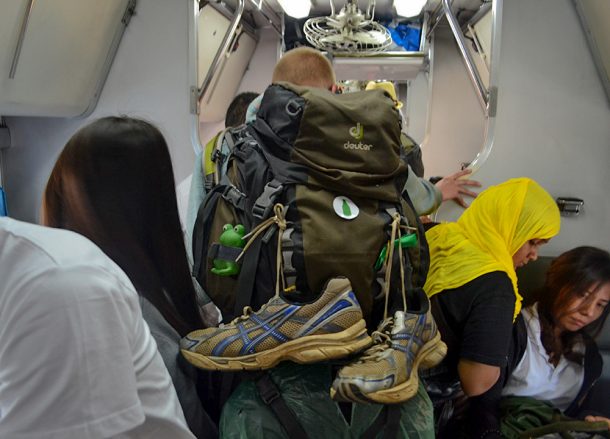 There’s only one daily train from Padang Besar to Bangkok (when writing this but full timetable here for confirmation), leaving at around 17:00PM and arriving when it arrives. Thai travel times are likely the least punctual I’ve come across, and I’ve had trains arriving 3 plus hours later than scheduled. Otherwise the ticket says (as image above) the journey takes 17 hours. Meaning an overnight train journey. For this there are 2 feasible options, first-class works well when travelling as a couple (double berth cabins), or 2nd class sleeper when travelling solo. With 2nd class sleepers, the upper and lower berth beds are hidden away during the day, and replaced with individual seating for daytime travel. Each seat also has space beneath to store larger baggage, and I would always pay the little bit extra for the lower berth for the window views at night. 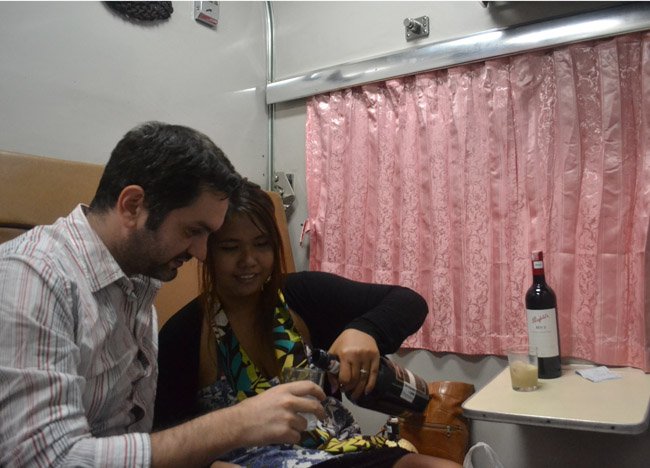 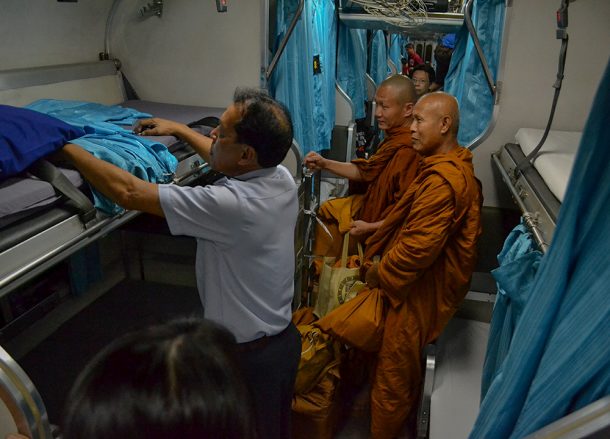 If you fail to find train tickets through to Bangkok, then I suggest taking tickets to Hat Yai, rather than staying long in Padang Besar. However, the chances are slim for the Bangkok route being fully booked, and, if anything, it will be the short distance travelling to Hat Yai that may be busy during Malaysian holidays etc. (e.g. Chinese New Year…) Otherwise, it is easy to reach Hat Yai by train, standing in the aisles if necessary, which then gives you plenty of options for onward travel. As Hat Yai would be the major city and travel hub for all of southern Thailand, with plenties of travel options available, including minivan options to all the southern islands in Thailand, as well as buses to Bangkok, and a decent enough airport for cheap flights throughout Thailand (I once flew to Chiang Mai for 800 Baht). And a short stay in the city is far from the worst option if waiting for trains in the coming days (Hat Yai Hotels Here). 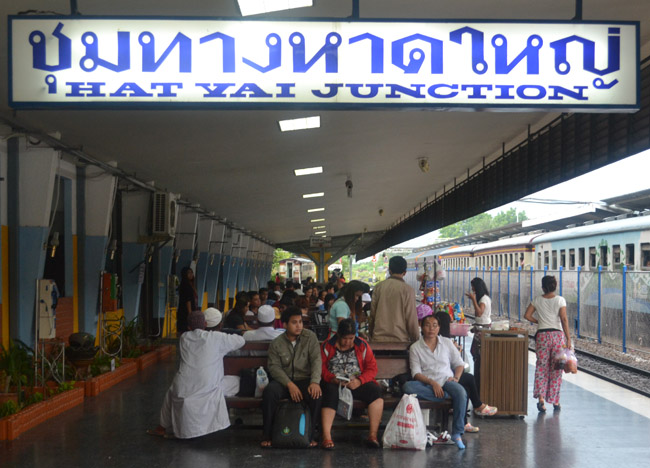 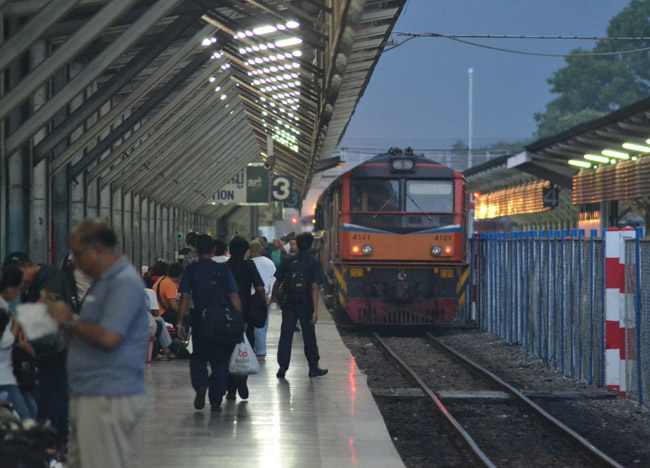 The train journey to Bangkok takes near 17 hours, although it is relatively relaxed and enjoyable, with few stops along the way. In fact, the only noteworthy station before Bangkok would be Hua Hin (tickets to Hua Hin here).. So I would forever recommend the lower berth, and I would even wait for a later train where they are fully booked (at least when not in a hurry). As the lower berth has more space, along with window views for the southern scenery, sunset, and nightscapes along the way. Versus the upper berth can feel cramped and claustrophobic, and cold even given it’s so close to the air-con. Otherwise both beds are made up at around sunset, although it maybe possible have the steward set them up earlier if the seat opposite is empty. For freshening up, there are open washrooms and toilets in each car, and they will alternate with a squat toilet, meaning you may need to jump to the next car for a western style toilet. With dining, there is a bogie car at the back of the train, and small tables can be set up for eating at your seats. As well as hawkers occasionally boarding with snacks along the way. 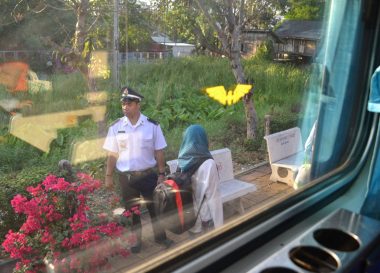 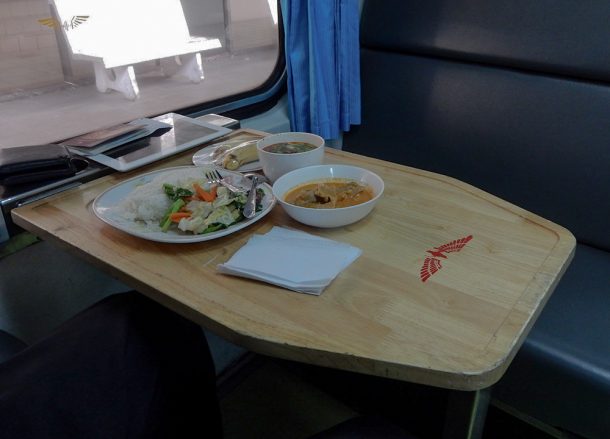 The final stop in Bangkok is Hua Lamphong Station, although there is another convenient stop before at Bang Sue, where both connect to Bangkok’s rather convenient MRT Underground and rail systems. On arrival, there will be taxis at both stations, as well as tuk-tuk’s, but I will always just jump onto the underground MRT system until I reach a more convenient location in the city. Although Hua Lamphong would be the nearest stop to Yaowarat Road and Bangkok’s Chinatown nearby hotels here. Popular stops along the MRT line would then be Sukhumvit for the Sukhumvit Area, Silom for the Silom area, and both these stops connect to the BTS Skytrain for onward travel to other popular areas, such as Siam. Then, for the return journey from Bangkok to Malaysia by train, I have written another rather comprehensive post here. 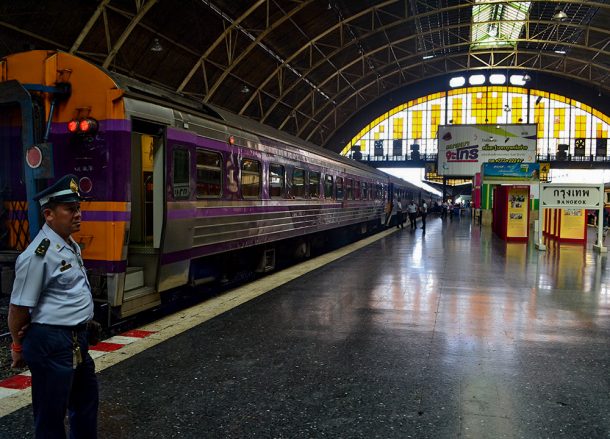 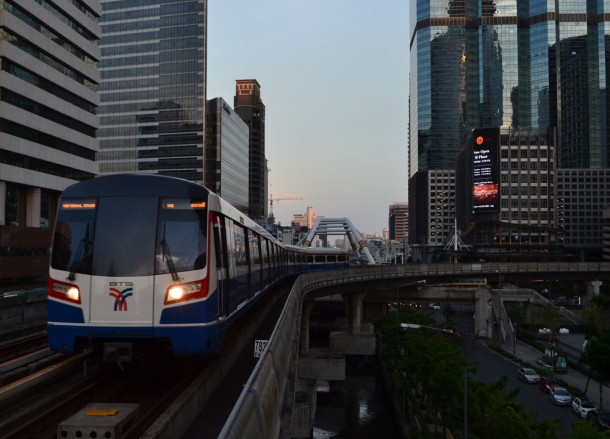