As we sailed from Bristol it was cold and raining steadily so we headed straight to dinner. The following two days as we cruised South the sun got warmer and with the Bay of Biscay as calm as a millpond we were able to relax on the deck in the sunshine as we sailed along the French and Portuguese coast. On the third morning we were woken early by the sun blazing into the cabin window. On looking out we could see the ship pass under a massive bridge and past a huge tower as we slowly moved along the Tagus River to our berth in the Portuguese capital Lisbon. As we joined a busy port of European cruises, with Celebrity and other big brand cruiseliners who were also embarking on their Mediterranean Cruise. 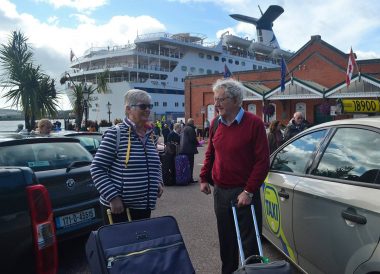 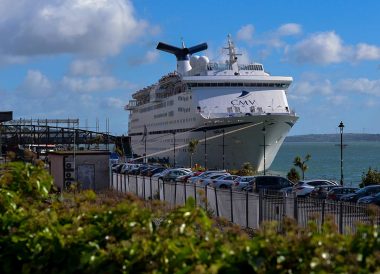 The cruise director had organised six possible excursions from which we could choose. We decided to take Lisbon’s Famous Sights. This was a good choice as we were able to visit many interesting sights which we had missed on previous visits to the city. Many of these related the 15th and 16th century the golden age of Portuguese history when explorers such Henry the navigator, Magellan and Vasco de Gama established the Portuguese Empire.

The most impressive was the magnificent Monastery of St. Jeronimos which is a UNESCO world heritage site and contains the tomb of Vasco da Gama. It is a late Gothic building and houses artefacts of much of Portugal’s Imperial history. One problem with this visit was it was difficult to fully appreciate everything due to the vast number of tourists. We then visited another UNESCO site the Belem tower. This impressive fortress was built in the sixteenth century to protect Lisbon from naval attacks. In fact I realised that this was the massive fortress we had sailed past on our journey up the Tagus.

The excursion continued with the trip across the bridge to Almada and the impressive monument to Christ the King This was inspired by the Christ the Redeemer statue in Rio and overlooks Lisbon. It provides a breath-taking view of the city and the Tagus.  We returned to the ship across the 25 th April bridge the longest suspension bridge in Europe and enjoyed our lunch.

After lunch we walked to the city centre which had many historic buildings providing more evidence of Portugal’s glorious past. We particularly loved the cobbled alleyways with a multitude of shops and restaurants and the buzz of many tourists. I would however warn that the cobbles become very slippery on a wet day as I had fallen on the previous visit. 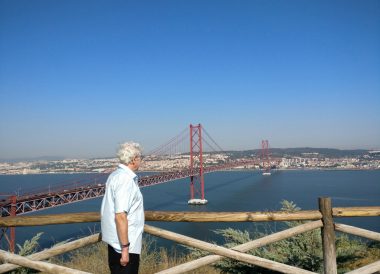 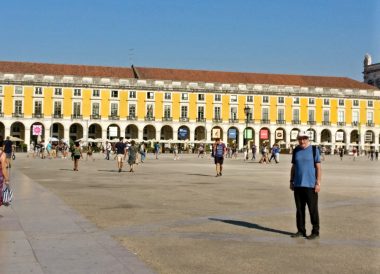 On leaving Lisbon we sailed south through the Strait of Gibraltar and on to Barcelona on our Mediterranean Cruise.

We had visited Barcelona on a number of previous occasions and had always enjoyed the city. In particular we were looking forward to a walk along Las Ramblas. The coach left us at the monument to Christopher Columbus which is one end of and Las Ramblas. Las Ramblas is a pedestrianized walkway stretching from the Columbus monument to the Place de Catalunya in the city centre.

It is tree-lined promenade which protects walkers from the scorching sun. It is always crowded and contains many kiosks selling souvenirs, street traders and bars but also high-class shops and a number of historic buildings and a massive street market. Something for everyone throughout the day and late into the night

Just off Las Ramblas is the beautiful Barcelona Cathedral but the most interesting church is the Sagada Familia a Catholic Church was designed by Gaudi and which has been recognised by UNESCO as a World Heritage site. It combines Gothic and Art Nouveau features and is unfinished but it is hoped it will be completed by 2026 the hundredth anniversary of Gaudi’s death.

We returned to the Columbus monument headed towards the port area and after a ten-minute walk we arrived at Barceloneta beach. This was a wonderful surprise as it is extremely unusual to find such a magnificent beach within walking distance of a major city centre. It was however very crowded. 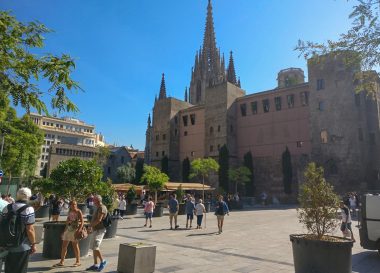 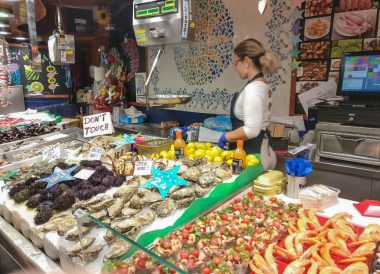 Next day arrived in Cannes one of the jewels of the French Riviera on the Mediterranean Cruise.

We knew this part of France very well due to previous holidays and had even hired an apartment to Nice for two weeks. The organised excursions were to Nice and Monte Carlo (disappointing) so we decided to stay in Cannes.

We took a tender from the ship and passed through the harbour crammed with boats of all shapes and sizes including many luxury yachts and tall ships remaining the previous weeks Cannes Yachting Festival.

Cannes certainly lived up to its image of affluence with many high-class shops and opulent hotels. Many on these are on the main road the palm tree-lined Promenade de la Croisette which runs for two kilometres along the shore.AS we walked along  La Croisette we came across the Palais des Festivals et des Congrès where the annual Cannes Film festival is held.

In the grounds of the Palais we found the handprints of many of the film stars who had attended the Festival. No doubt film buffs would have been excited trying to locate the handprints their idols.

We were also particularly impressed by the old quarter as we climbed the winding cobbled streets to the clock tower which overlooked the Bay. This gave us a wonderful view of the yachts and town below It were well worth the effort despite the oppressive heat. 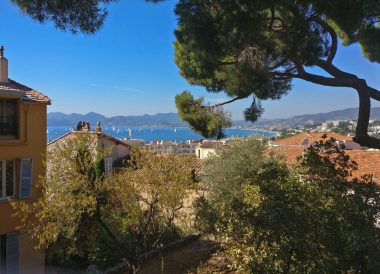 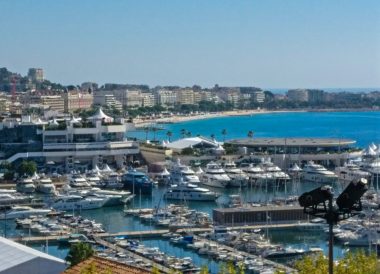 The following day we berthed at Civitavecchia, the port of Rome, and about a ninety minute trip to the Eternal City. We again decided not to take the organised excursion to the city as it was very hot and we had been to Rome on a number of occasions. Although we always enjoyed the city we found it overcrowded and oppressive particularly in the heat. Instead we decided to relax and experience a smallish Italian town not particularly geared to tourists.

Civitavecchia is totally dominated by the massive Forte Michelangelo This was commissioned in the sixteenth century by the Pope, to defend the port of Rome against the threat of pirates. The tower was designed by Michelangelo. Unfortunately the fort was closed but even walking around it gave the feeling of impregnable strength.

We enjoyed exploring the city the character of its old buildings and especially its wonderful beach and walking along the coast. A pleasant relaxing day before heading home. 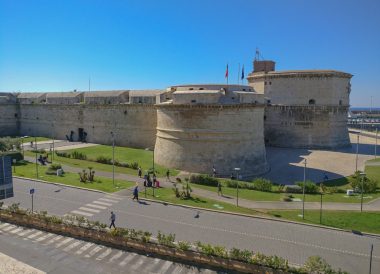 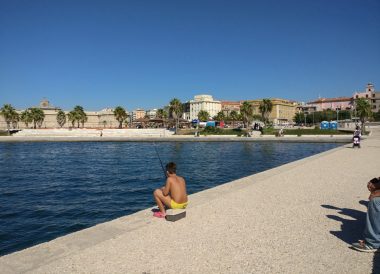 Next stop on the Mediterranean Cruise was Gibraltar and an opportunity for many to indulge in a day of duty-free shopping. The prices were extremely low with many bargains to take home as presents. We began to feel we were nearing home as the Rock emphasised generations of British history highlighted by the Trafalgar Cemetery.

However on leaving Gibraltar we left behind the heat and prepared for the cooler climes of home.