Arriving late to Mandalay Palace we are quickly shooed away by the armed guards patrolling the front gates which leaves us in the lurch for the evening. The original plan was to photograph sunset at Mandalay Palace (area here) but obviously this would not happen. Instead, in an attempt to salvage the wasted journey, we search for a sunset viewpoint on the surrounding moat. We did well. Walking from the front gates to the northeast corner we find the perfect spot to watch the sun slowly fall to the horizon. Unfortunately we are not alone. Holding hands, eyes fixed on the lakes horizon we can’t help notice odd goings on around us where girls shelter beneath trees lining the main stretch of the road. They are prostitutes. Unlike elsewhere in Asia we find the prostitutes in Mandalay don’t actually look like prostitutes, certainly not at first glance. The prostitutes dress relatively conservative, legs covered with sarong, only the more skanky of the bunch sporting leggings. However they are by no means ladylike; Fanfan pokes me “Don’t look… that one’s peeing”, I of course look and yes she is peeing, leggings round her knees, peeing on the pavement. Is this what sex tourists travel the world for? So now the idyllic sunset we’d hoped for was distant, the romance of the moment somewhat peed upon. We wait around anyway. 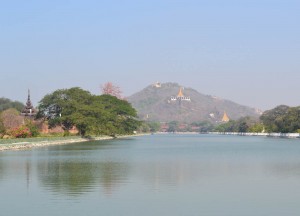 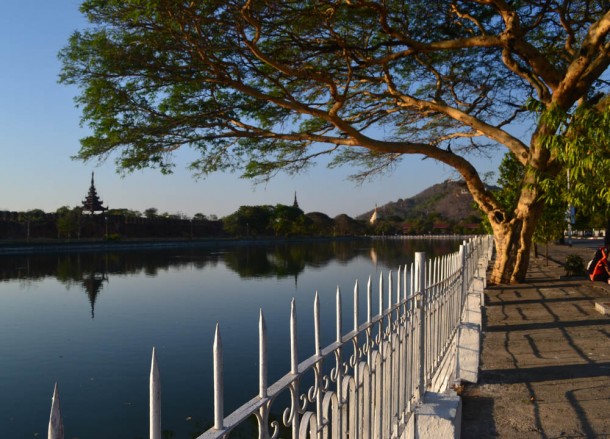 Prostitutes in Mandalay appear distinctive on this street, bleached blonde hair, tattoos, and to our surprise many appear to be dumb, unable to speak and only communicate through sign language. The youngest of the group looks to be no more than 16 years old. Of course we feel terrible. Everyday life goes on around, joggers jog, kids and families exercise on the outdoor facilities and traffic pass on the main road they are working. I watch as a motorbike pulls to the kerbside, where a local punter jumps off, approaches one of the prostitutes at the river and scoots off into the distance with her on the back. Cringe. I try sneak a photo between the trees (as below). 20 minutes passes and the same girl is back to the kerbside. 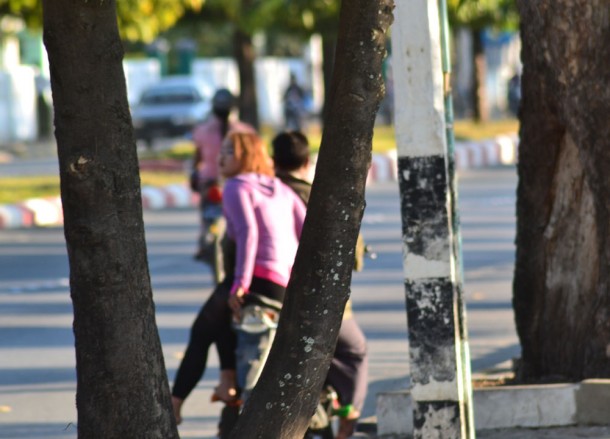 The Sunset at Mandalay Palace

While not quite U Bein Bridge the sunset at Mandalay Palace is worth the visit and appears to be a favourite spot for locals who pull up to snap a few shots on smart phones and digital cameras. We were the only tourists to be seen in the area which of course is a huge bonus. 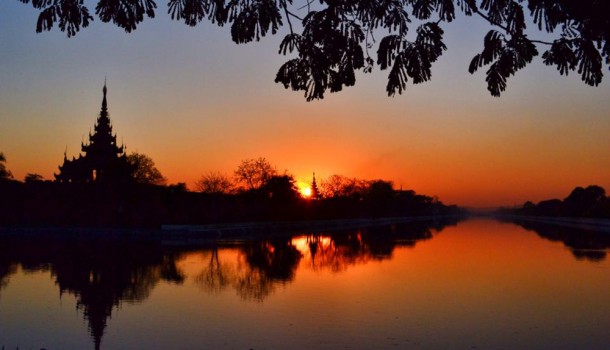 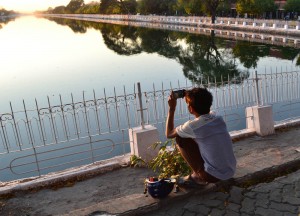 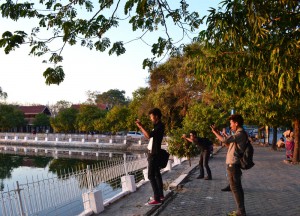