Arriving in Kuala Lumpur there are a few simple notes you’ll need to know. First off, give plenty of time to journey to and from the airports (I’ve missed flights before) and double-check that you’ve arrived at the correct airport. There are two main airports in Kuala Lumpur, neither close to the centre, but both close to each other. The two airports are KLIA1 which serves international carriers, and KLIA2 for the budget and low-cost carriers (mostly Air Asia). To reach the central station (KL Sentral) the best option is either by train (KLIA Ekspress) or shuttle bus (Skybus). On arrival to the city centre, you’ll easily find cheap taxis to forward on to the tourist areas in Kuala Lumpur (full airport travel guide at the bottom). The best tourist areas in Kuala Lumpur are not far apart and include KLCC with the Petronas Towers, Bukit Bintang for shopping and nightlife, and Chinatown with all the heritage sites. All tourist areas are worth a visit. There are two convenient rail networks which connect the tourist areas in Kuala Lumpur (Monorail and LRT) and they are cheap and easy to use. Prices for normal metered taxis (red and white) start at 3 RM, although haggling is often necessary for the more touristy parts of town. Expect to pay no more than 12 RM in central areas. There is also larger blue (executive) taxis which are more comfortable but start at a higher fare (6 RM). 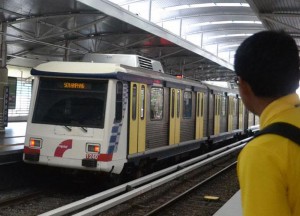 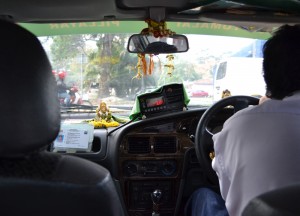 The first area on arrival will likely be KL Sentral which is little more than a travel hub for onward travel and for forwarding to the city centre. There’s not much going on in this area other than Brickfields, dubbed Kuala Lumpur’s ‘Little India’. It maybe worth a walk about eating, exploring, but for accommodation, I’d give it a miss. For the better tourist areas in Kuala Lumpur continue to KLCC (Kuala Lumpur City Centre), Bukit Bintang and Chinatown. Each suited to different travellers and budget, and each brings their own advantages and disadvantages. Note, Kuala Lumpur is modern and compact and with effective transport networks, it is relatively easy to get around. Check here for full list of KL Sentral Hotels >> 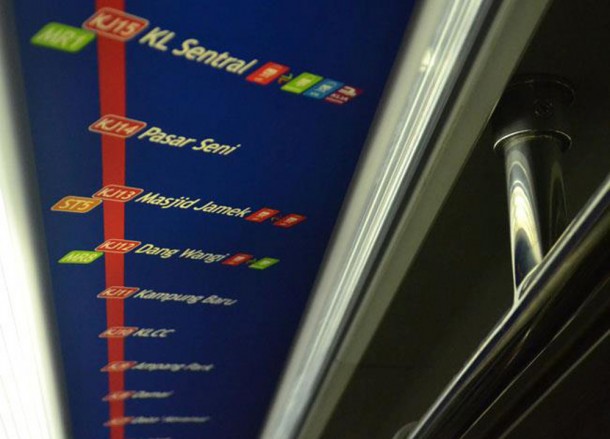 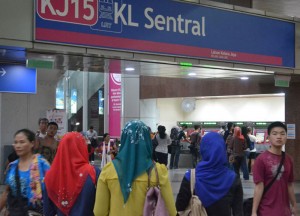 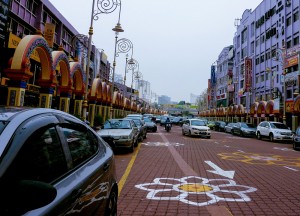 KLCC is the shiny new centre of Kuala Lumpur best known for its iconic Petronas Towers. This area would be the high-end option for a stay in Kuala Lumpur but still remains relatively cheap compared to many Asian cities. For accommodation, I would suggest the hotels on the opposite end of KLCC park facing the towers (views from the Traders Hotel shown below). Few people see past the towers in KLCC but there is a lot more going on. The nearby Syakirin Mosque is worth a visit, the shopping and food courts of Suria KLCC mall, the surrounding KLCC park… there’s something for everybody. In the daytime the KLCC area sits quiet and serene, then at night the Towers light up and KLCC park comes to life with music and dancing fountains. KLCC is my favourite of tourist areas in Kuala Lumpur and is definitely worth considering. Check here for full List of KLCC (City Centre) Hotels >> 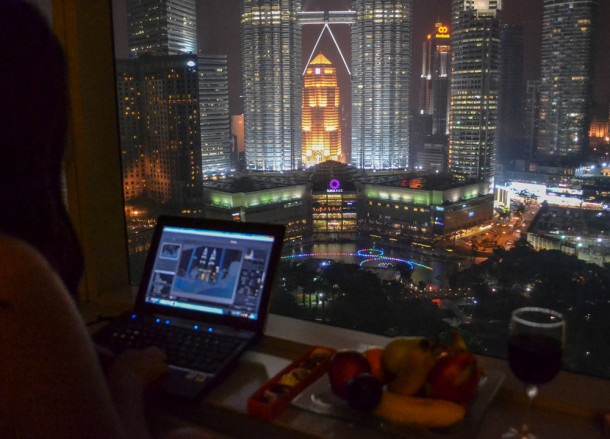 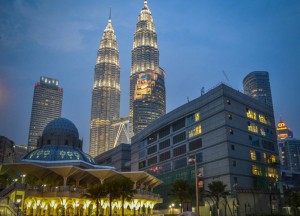 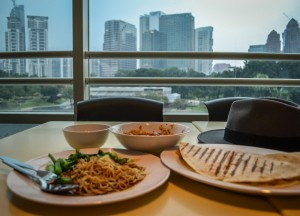 Bukit Bintang is a modern and lively tourist area, with 24/7 street bustle, and plenty of entertainment for all sorts and everybody. However, as with popular tourist spots, it has drawn the less admirable faces of tourism becoming slightly seedy and littered with touts. Before it was our favourite tourist area in Kuala Lumpur but after too many sleepless nights we now opt for the comforts of KLCC. Being said, we do still return each and every visit for shopping, nightlife, eating, and for the Jalan Alor food street which runs on a street parallel. In Bukit Bintang expect massage shops, trinket stalls, shisha bars, Indian mamak restaurants….. With a location directly next to the monorail (Bukit Bintang Station) it is simple for travel to other tourist areas in Kuala Lumpur. Check here for full List of Bukit Bintang Hotels >> 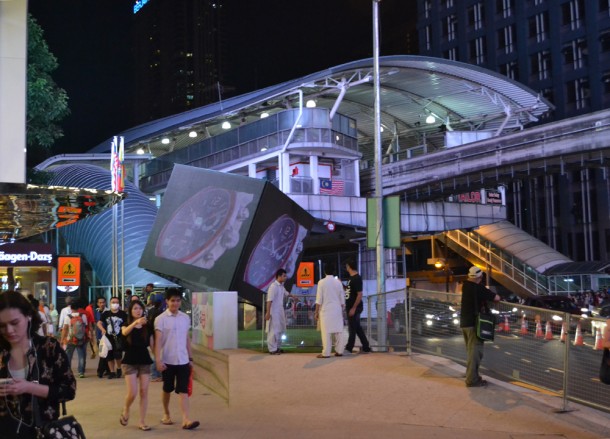 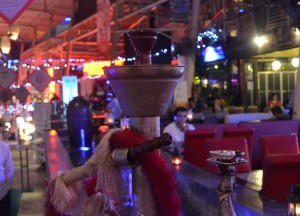 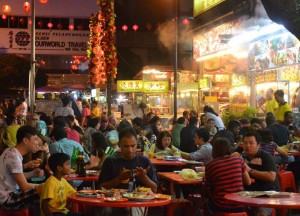 This area could be divided into two, maybe three smaller zones… but they are all nearby, and all within an easy walking distance, so I’m bunching them together. These would be the popular backpacker areas with all sorts of budget accommodation and hostel stays on offer. For high-end hotels, the area also brings some unique and boutique heritage experiences worth considering. Just a handful of attractions includes the Merdaka Square, Masjid Jamek Mosque and the Central Market (Katsuri Walk). Chinatown (Petaling Street) would be the popular choice for most and is famed for its replica goods markets and top-notch Chinese food. To explore this area grab the free map from the hotel or check here for our Google Map Guide. Full List of Chinatown and Merdeka Square Hotels >> 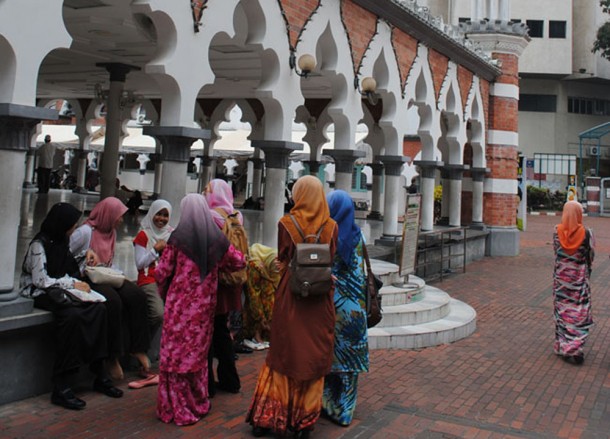 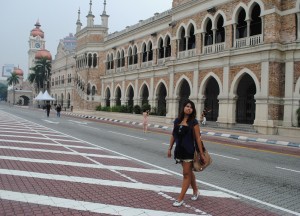 There are two airports KLIA (Kuala Lumpur International Airport) and KLIA2 which was formerly at the LCCT (Low-Cost Carrier Terminal). Both are found in the same area and are a fair distance from Kuala Lumpur City Centre. The journey to reach the centre and best tourist areas in Kuala Lumpur take roughly 1 hour by road (depending on traffic).

Taxi to the City: The pricey option. Expect to pay RM60 up.

Skybus to City Centre: Ticket Price RM12 from either KLIA or KLIA2 and arrives at the KL Sentral transit hub. The journey time is roughly 1 hour 15 minutes and buses leave every 30 mins (or so). Full schedule, pricing and online booking check here. From KL Sentral a short taxi, train or monorail journey finds all the best tourist areas in Kuala Lumpur.

Ekspress Train to City Centre: The KLIA Express (Ekspress) is a non-stop, high-speed train running between both airports and the KL Sentral transit Hub. The journey time takes 28 mins and trains leave every 15 mins and cost RM 35. For schedule, pricing and e-ticket bookings check here. Again a short taxi, train or monorail from KL Sentral will find most central hotels. 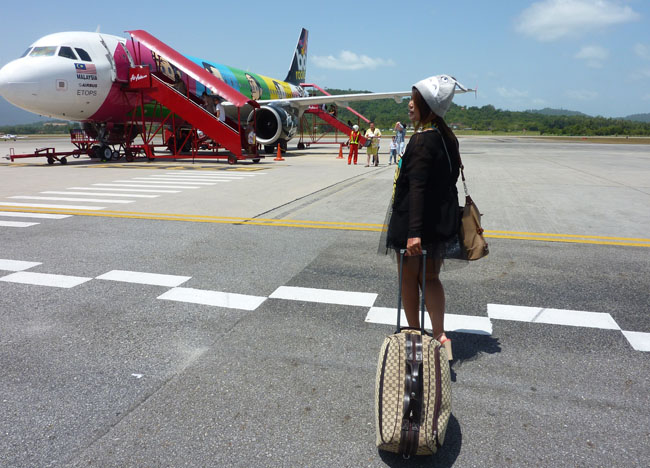 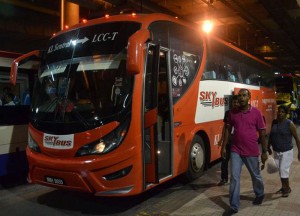 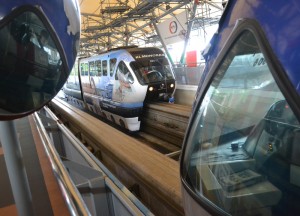