When I think of Ho Chi Minh these days, I think of a modern and lively metropolis, buzzing with bikes, and dotted with vibrant and exciting goings-on. So on our recent visit we were set to explore this less-likely side of the city, by staying at Le Méridien Saigon, a distinctive contemporary hotel located on Ho Chi Minh’s Saigon riverside. Our plans for the first night were also for “Chill Skybar”, the city’s trendiest rooftop bar, although these plans were fortunately scrapped before sunset when fork lightning started to break through ominous dark clouds, which were gathering just above our hotel window views. This almost guaranteed that the rooftop bar balcony at the Skybar would be closed, which in many ways felt like we had dodged a bullet. So instead of dressing up, to be crammed onto an outdoor balcony, to drink arguably overpriced drinks, we were confined to the comforts of our room that night, with a bottle of wine, a variety of Goi Cuon fresh spring rolls, and wrapped in soft dressing gowns. I know where I’d much rather be. 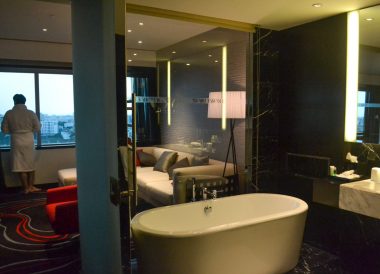 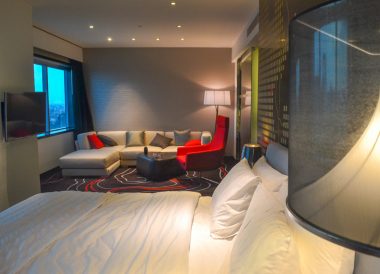 We of course have further opportunities to visit the Skybar, but the who purpose now seemed mute, as we already have our views over the city, without all the hassle. And while Ho Chi Minh may not share the most iconic city skyline in Asia, it definitely hosts a unique and contrasting one, where gleaming tower blocks stand over pastel apartment blocks and red brick tiles of the old administrative rule. Motorbikes stream endlessly through the streets beneath, like teenie tiny tadpoles, in this forever moving city (I did write this after that bottle of wine). And while we did stay on the Saigon riverside of Ho Chi Minh, we opted for a guestroom with city views, as there are otherwise umpteen opportunities to view over the riverside which is set as the backdrop to many of the hotel’s facilities, including breakfast, dining, the fitness centre and most importantly the swimming pool (unfortunately the swimming pool was under renovation during our stay, as it really frames the river views perfectly). 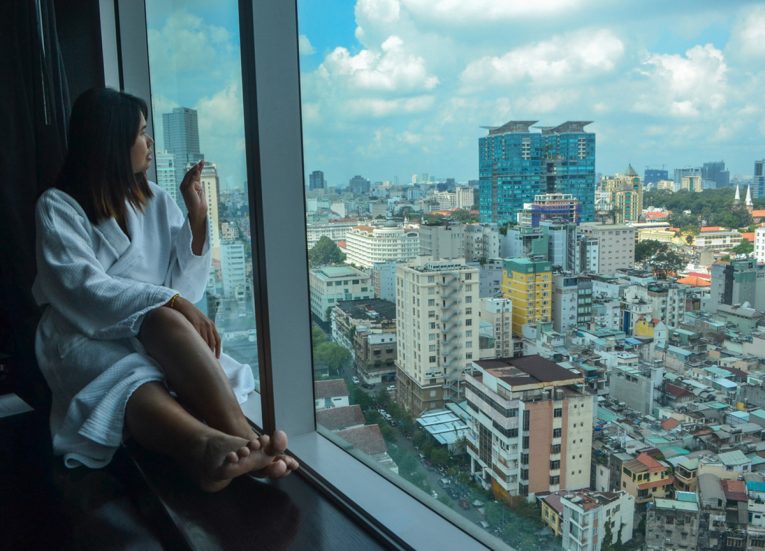 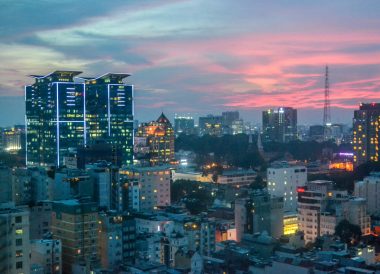 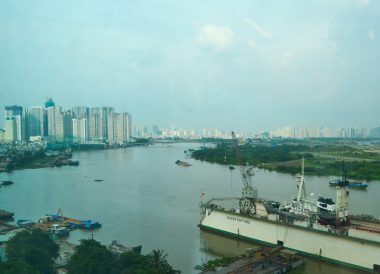 So this was not our first visit to Ho Chi Minh, and it won’t likely be our last, and there really isn’t much left for us to explore tourist-wise now in the city. And therefore we don’t feel too bad for making the most of the hotel, rather than outside, in the city. And while there once was a time I’d be out to explore the early morning street food, without fail, I am more excited on this visit for the range of eats found at the hotel’s buffet breakfast buffet (yet it does still feel like I’m cheating on the ‘local experiences’). That being said, I can get Pho pretty much anywhere in the city, so I happily indulge in the cold cuts, cheeses, and sushi bar of Le Méridien Saigon. And the same goes for Fanfan, who found an unhealthy obsession for the breakfast ice-cream counter, so much so, that she forced me to go back for further orders, as she didn’t want to “look like a kid eating ice-cream for breakfast”. So instead I looked like a kid eating ie-cream for breakfast. Otherwise the hotel is just refreshing to explore, and it brings a youthful yet sophisticated escape from an otherwise relentlessly busy city. 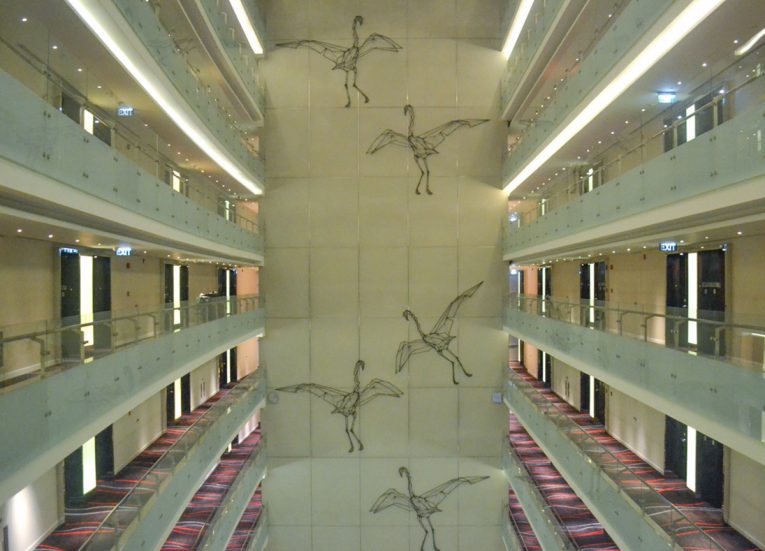 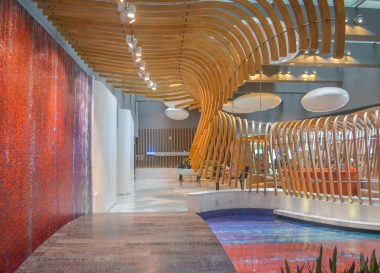 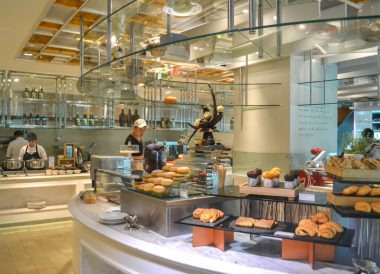 I always see District 1 as being split into two halves, the backpacker half, found above Ben Thanh Market, and the discerning tourist side, set below to the river banks. The backpacker area with its ramshackle roads and bustling local life, and the tourist side, with rambling boulevards, and a hint of French colonial charm. And while I do enjoy the bustling street life of the outside areas, they do become uncomfortable after time, and Fanfan will never get used to the lack of footpath, and never-ending traffic (despite having been brought up in Thailand). The contrasts are very different between the two areas, yet they’re really not far apart, and we never spent more than $2 when travelling between the two (using either Uber or a Grab). Otherwise the main attractions of the city are found nearby, and we can easily see the steeples of Saigon Notre-Dame, and the Vietnamese Flag standing with pride over city hall from the near views of our guestroom window. It’s pretty much a stone’s throw away from the busy central stretch of Nguyen Hue Walking Street. 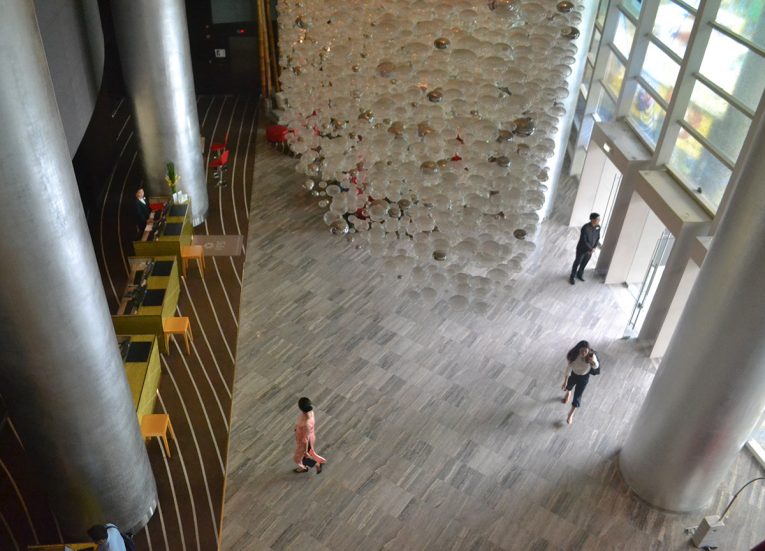 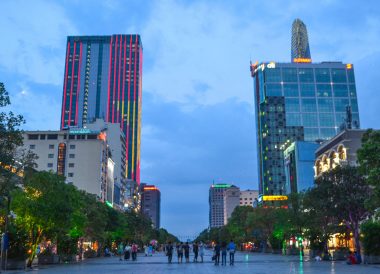 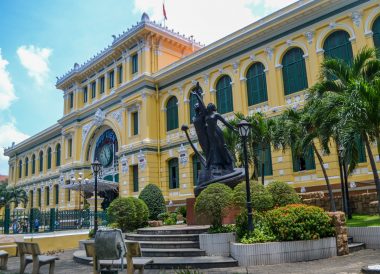