We were here by no more than a coin toss, a flip up between the ‘Shadow Puppet Show’ and ‘Massage by the Blind’ and I am sure we won. The experience turned out better than expected, not really for the Shadow Puppet Show but for the escape of surrounding mayhem and the somewhat eeriness of the courtyard buildings. Despite being an ancient city, Xian is new China and it can be hard to find these hidden historical buildings which to tourist eyes are few and far between. This complex, the Gao Grand Courtyard, is the perfect example of a well preserved, authentic, wealthy folk house and the kicker is no swarming tourists, in fact it was quite the opposite, the compound is small yet we can’t find a soul. I definitely recommend going at night, not only is it likely to be less crowded but the overall feel is quite haunting and surreal under silent, darkness and red Chinese lanterns. Feel free to poke around, squeeze up to the top floors, admire the art, there are apparently 56 rooms in total so expect to get lost. 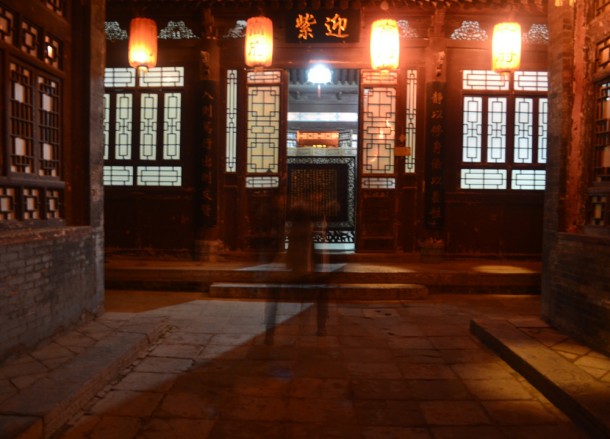 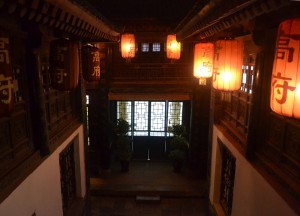 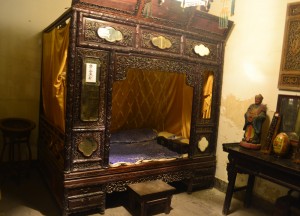 We were alone in the Courtyard, a little lost in this seemingly abandoned complex when a lady rushes past babbling in Chinese. Following we push through a curtained doorway to find a small room seats already filled and the Shadow Puppet Show ready to begin. Strung in the corner are slightly disturbing hand puppets, a Monkey, a Witch, a Monk and a Pig, each caricature representing those of tonight’s shadow puppet show “Journey to the West”. I was clueless to the story or what was going on in general (no subtitles) so Fanfan knowing the story from Chinese folk tales found in Thailand was able to help. helped here. Journey to the West is a tale of adventure following the journey of a Tang Dynasty Monk and his three disciples, Monkey, Pig (Pigsy) and Friar Sand (Sandy). They get up to all sorts. Summarising: Journey to the West

I am one of the few non-tea-drinking-Brits yet tea in China it is weirdly exciting for me. The teas, the processes, the whole tea room experience is somewhat beautiful. This was our second tea room ‘tour’, the earlier (Beijing) forced onto us as tourists with additional hard-sell. While this setup was very similar it was a lot more relaxed. Silent room, homey surroundings, zero tourists. We are the only visitors to the tea room tonight. The curator welcomes us, sits us at the front table, offers two teas to sample and the choice of another. Ginseng Woolong Tea, Lychee Concubine Tea and our choice Bitterness Sweetness Tea. Chinese tea doesn’t taste of tea to me, flavours often more fruity and floral and so much more than the traditional English Breakfast Tea I grew to loathe. 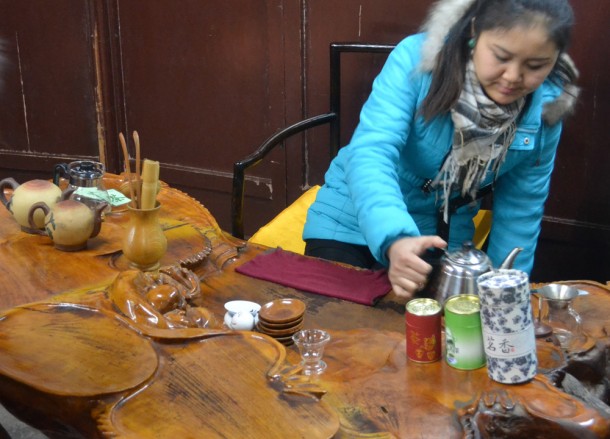 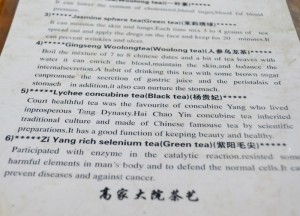 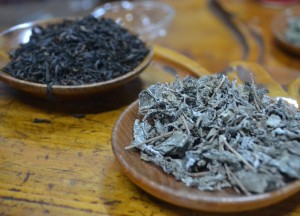 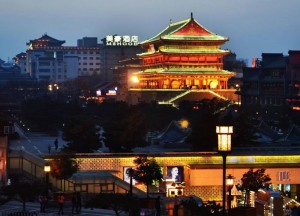 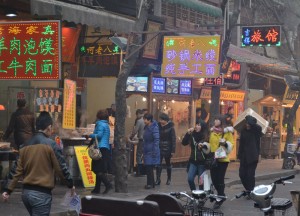