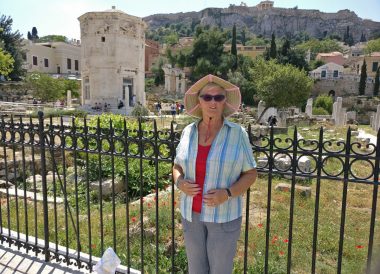 As we left the Suez Canal, after our Asia and the Indian Ocean leg, of our Round-the-World Cruise (and the Transatlantic Cruise and French Polynesia and Pacific Cruise before that). We began the final stage a ten-day crossing of the Mediterranean and then on to London. We were mainly at sea but had three more ports to visit before reaching Tilbury. The days at sea were very calming after the intense activity of SE Asia. We were able to relax on enjoy cruising along the North African coast with the temperature in the high twenties as we sailed towards the Greek port of Piraeus.

Piraeus is one of the busiest ports in Europe and about six miles from Athens. We took the metro to the centre of Athens and spent most of the day looking at ruined buildings. We admired the Acropolis visited the Plaka and the ruins of the temple of Poseidon. A ten-hour visit was not nearly long enough to see the entire city and Athens has been added to our list of destinations for a further visit. 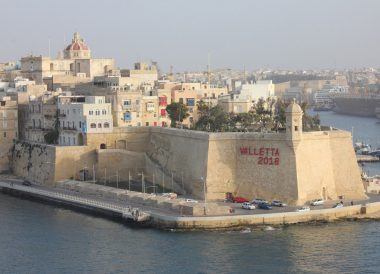 Our next port of call was the capital of Malta Valetta. The walled city and its historic battlements looked very impressive as we sailed into the Grand Harbour. The battlements reflect Malta’s history of many invasions over the centuries due to its strategic position in the Mediterranean. The most recent conflict being World War 2 when Malta was awarded the George Cross for the bravery of residents during the siege by German and Italian forces.

There was much evidence in Valetta of its British past and there were many Churches illustrating its long Christian heritage including St Paul The Shipwreck commemoration Paul being shipwrecked in Malta in AD 60 and St Johns Co-Cathedral including Caravaggio’s masterpiece “Beheading of St John”. We also took a hop-on-hop-off bus and visited Malta’s old capital Mdina a wonderful example of a medieval city. 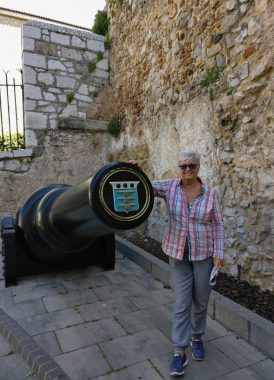 Our final port of call was Gibraltar. A place we had visited on a number of occasions previously. It is famous for its Barbary apes and became a British territory in 1713 under the treaty of Utrecht. It is suggested that if the apes leave Gibraltar the rock will cease to be British. They seemed perfectly content however and show no signs of leaving.

Gibraltar gave us an opportunity to get acclimatised to returning home and for the first time in four months, we were able to use sterling and buy delicious meat pies in Morrisons.

The voyage from Gibralter to Tilbury was pleasantly sunny and uneventful apart from the sighting of a pod of dolphins. We arrived in Tilbury at 7 o’clock on Sunday morning could not get a taxi another couple gave us a lift to the local train station, got the tube to Barking and then a taxi to Euston, train to Holyhead, ferry to Dublin met by our awesome son and home in Bangor by 8 o’clock. It was a hectic day getting connections, particularly with two broken suitcases, but we made it and can now reflect on a memorable 120 days around the world. Reflections to come.