On the 13th April I fly to Yangon from the drenched streets of Bangkok. When I arrive it is nighttime and everything in Yangon appears calm and seemingly normal. I am here for the Thingyan Water Festival in Yangon, a celebration which takes place for 3 days between the 13th and 16th of April, to welcome the New Year in Myanmar. In the past years I’ve joined many Songkran festivals in Thailand, even the Singhalese New Year in Sri Lanka but my visit now to Myanmar was by far the more intriguing. The significance of Thingyan in Myanmar is magnified by the social and political climate where parties of any kind don’t really exist and groups are discouraged and oppressed. In comparison with Thailand where people can, and do, party everyday, year round the contrast was guaranteed to be significant. For the Thingyan Water Festival in Yangon I keep it local in downtown area and Chinatown where in three days I see next to no other tourists or travelers. While there are more touristy friendly parties found in Yangon during Thingyan, Inya Road and Kandawgyi Road a popular area, but I was more interested in street life and localised events. 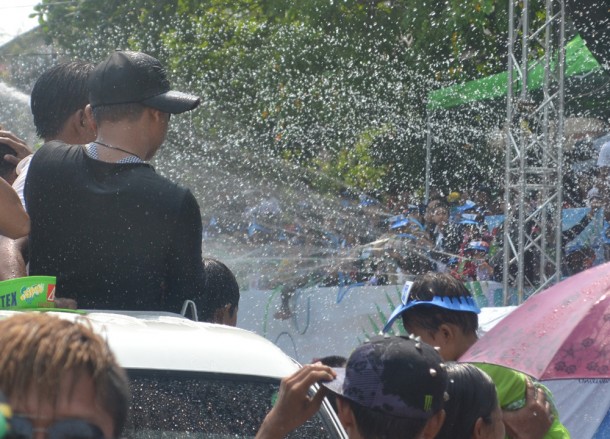 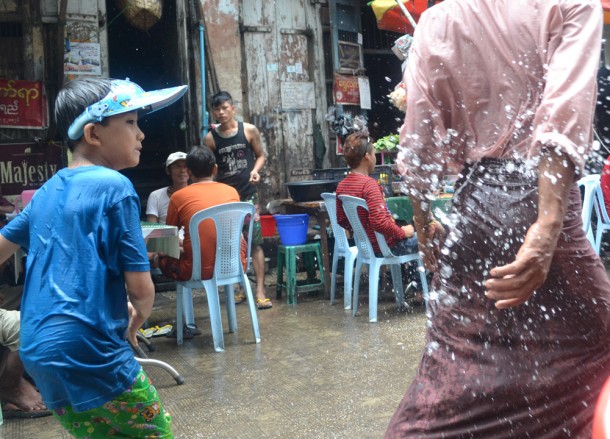 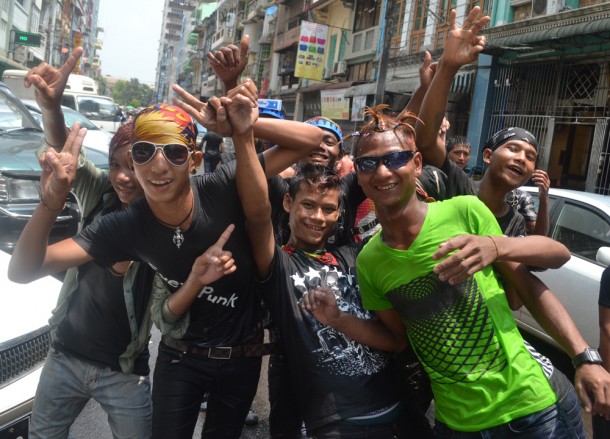 The morning starts quiet and as I sit for early breakfast the sounds of cheers and horns pass on the street out front. I rush to the front and find a parade of pickup trucks passing in anticipation for the water fight ahead. It is now close to 08.00am and for now no water is thrown. The water festival doesn’t start until 9:00am each morning, and it will then continue through to 12:00pm before a lunch break. At 15:00pm it starts again, continuing through to 18:00pm. I’ll get into the rest further down. So as I sit back to my breakfast a gong sounds on the road as two youngsters pass on the street balancing a wooden pole and hammering a bell which dangles from the center. Soon following is a procession of monks with alms bowls taking temple offerings from residents of the street as they pass. The monks will then return to the temple when soon after the water fights begin. 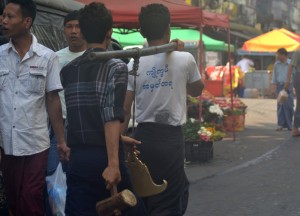 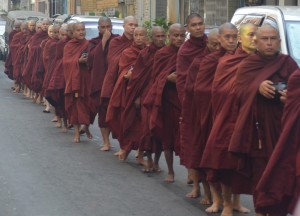 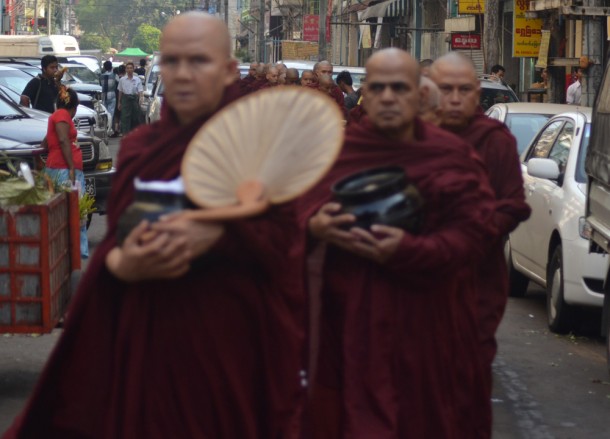 Temple Traditions and the Burmese Zodiac

Similar to Song Nam Phra of the Thai Songkran festival I start the day with merit making at the nearby Sule Pagoda. Much of this ceremony was in fact new to me including the Burmese Zodiac. I start at the foot of a Buddha statue where I pour water over the animal statue which corresponds to the day I was born. For me it was the Monday and the Tiger. I pour nine small cups of water on the Buddha statue, then five small cups of water on the Tiger statue below. The pouring of water on Monks, or Buddhas, is the most significant ceremony of the Thingyan Festival. The process is said to wash away bad actions of the past year which is followed by wishes for the coming new year, asking for good fortune and health for myself and family etc. Check here for the full temple ceremony at Sule Pagoda and the Burmese Zodiac. 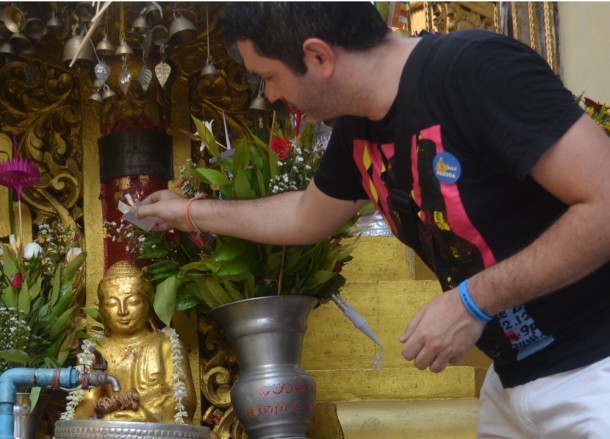 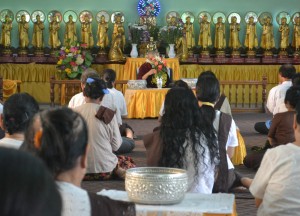 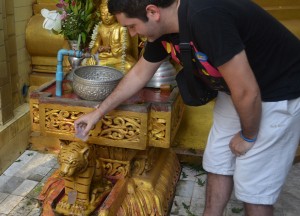 Almost instantly when the time turns 9, the quiet streets of downtown Yangon transform into a party with water fights, booze and thumping techno. Arriving to the same corner I started the transformation is unbelievable, the scenes probably best described as mental. Myanmar’s youth and punk cultures are prominent in the celebrations and they quickly take over the streets as the older generations sit back at their shop houses or share free feasts under tents erected at the roadside. Every other street corner would be bouncing with techno and small stages will be set with water pools and hosepipes. I did try to video some of the mayhem, but it’s not easy to do this on a street being drenched with water. Video below. 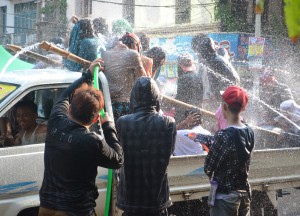 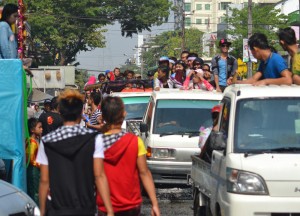 Between 12:00pm and 15:00pm the pickup trucks drop their buckets, and the stages put down their hoses, but this in no way means it is dry. Expecting to get a break I change my clothes and go in search of lunch. Within minutes I am again drenched. Despite my ninja-like maneuvering I fail to make it past the first corner, and I was now wetter than from the earlier barrage. I stand in the sun to dry but this just makes me easy prey for the kids roaming the streets with buckets. The longer I linger the wetter I become. The quicker I run the drier I remain. Either way it is best to bring 2 or 3 sets of clothes per day, and expect to rack up a sizable laundry bill. 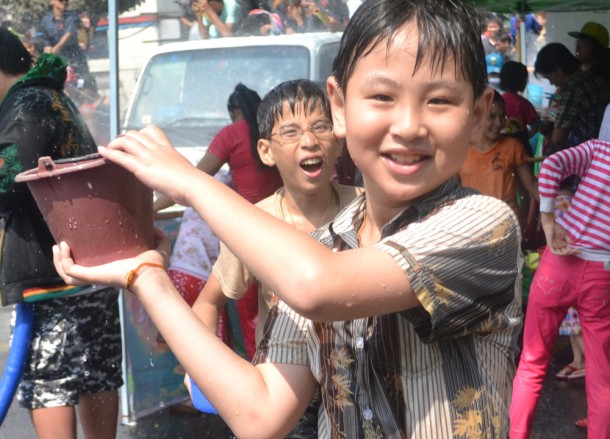 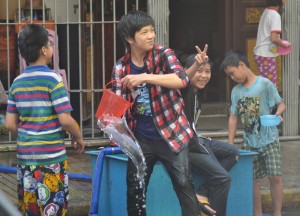 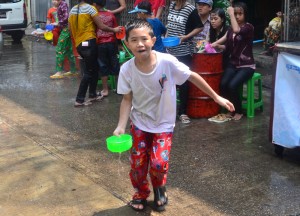 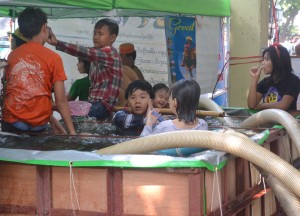 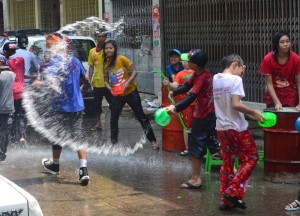 For the daytime session I join one of the larger stages in downtown Yangon, which is found at the bottom of 19th street, a popular street food area in Yangon, a handy area to hide from the water fights. So here the stage is setup like a fort with high powered water cannons to soak the passing cars and vehicles. These stages are central to the water fights as the traffic circling the area will always come to pass here. It is also on a wider road to bring fit more crowds. Expect many drunk teenagers. Speaking to the more religious residents of Yangon I find many are put off, and almost embarrassed, by the ways in which the festival has progressed and at times I can see their point. 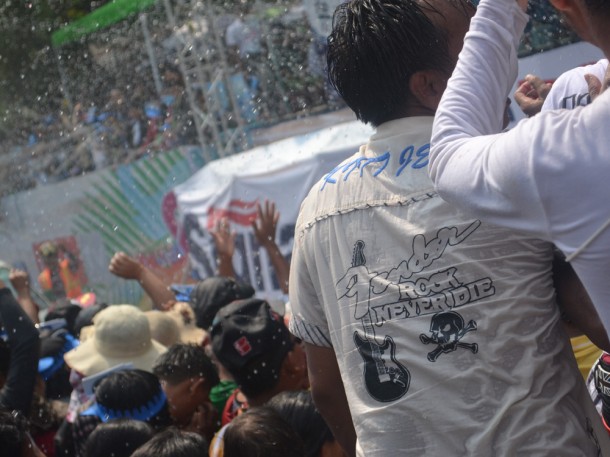 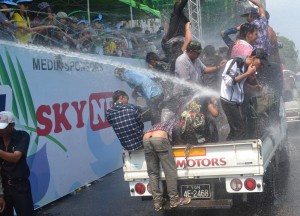 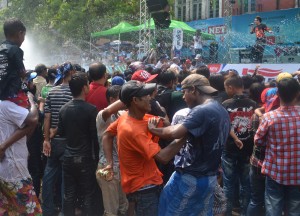 At 18:00pm the water fights end and you should be able to stay relatively dry from here on, although I wouldn’t guarantee it. Much of the crowds will remain at the main stage as it turns to host live music with local bands and presentations by celebrities. These events were hosted by the local broadcasters Skynet and much of what’s going on is televised and broadcast live. 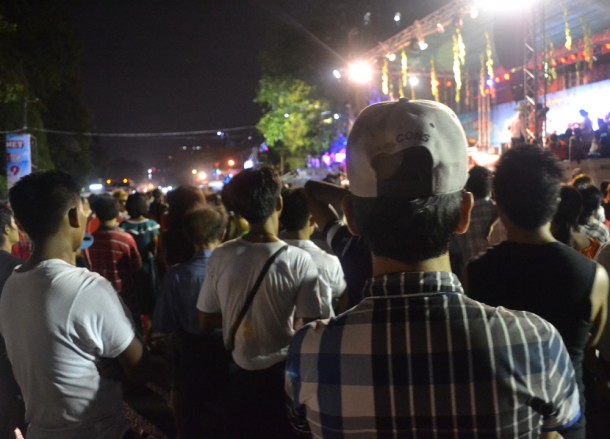 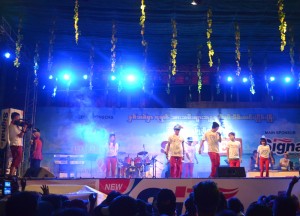 The Final Day of Thingyan

The third and final day of Thingyan will be the eve of the lunar New Year and this day’s water fight scheduling is completely waived to allow for a full day of water antics, from early morning, through to late night. Again, the main stage hosts concerts throughout the evening only the crowds now appear less rowdy and people just look tired weary. Three days straight of celebrations does take its toll. In a similar way to New Year’s through the world the Thingyan festival ends with a midnight countdown followed by skylines lit up with fireworks. I then leave Yangon with the the taste of betel nut in my mouth and with the worst hangover of my life. It was worth it. 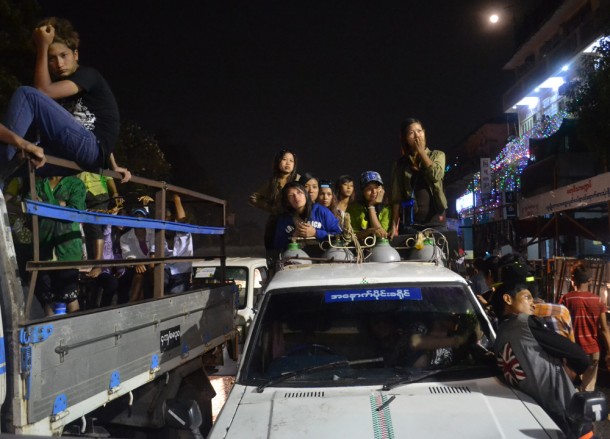 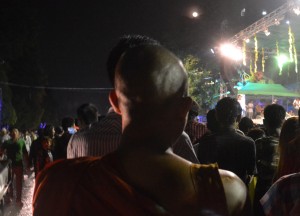 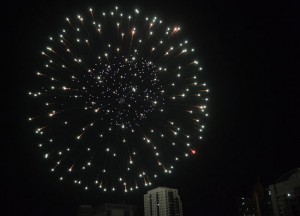 During the Thingyan festival I was continually offered free food from locals who man shelters on roadsides with offerings to feed people. The most common snack would be Mont Lone Ye Baw, a traditional Thingyan celebratory sweet of sticky rice balls, flavoured with coconut, and filled with jaggery palm sugar.  These sweets are also found at the temples where helpers cook them quickly in large woks of boiling water and hand them out to passersby. Otherwise, the feasts will reflect the local culture, which is mixed in Myanmar, so the Chinese were feasting on stir fries while the Indian’s on Biriyani. For local foods check our Myanmar street food guide.