Khao Soi Curry is easily the most popular dish with visitors to Northern Thai Food. For me it also the most underrated of curries in Thailand. Khao Soi should top everyone’s ‘to do’ list when eating Thai Food. A mild, coconut based curry served over soft egg noodles and topped with crisp egg noodles. Perfected by optional additions of lime, onion, chilli and pickled cabbage. Khao Soi is easily found in both street food and restaurants throughout Northern Thailand and costs around 30 to 50 baht per bowl. You will also find Khao Soi on many Bangkok menus. 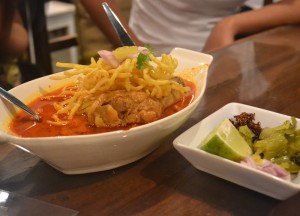 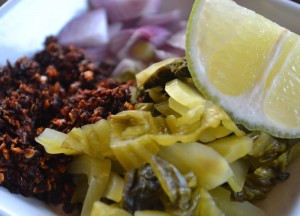 Or ‘Chiang Mai Sausage’ as it is often known. This tasty, spiced pork sausage is found everywhere in the North and is not to be missed. While hard to admit it even beats my beloved Isan Sausage. It is honestly that good. Sai Oua fuses many of the signature Thai tastes; the sour of lemongrass and kaffir lime leaves, the heat of chillies and of course the all important kick from galangal (ginger). Prepared in spiral lengths and sold at most street sides and local markets of Northern Thailand. It is also a big favourite at the Khantoke Table. For those who can’t get enough Northern Thai Sausage it is also found uncooked to fly home with (as we do). Costs roughly 300 Baht per Kilo. Both the above are popular Northern Thai chilli sauces; both essential eating at every Khantoke table. ‘Nam Prik Ong’ is the more popular of dips a blend of red, birds-eye chillies with pork and tomato. My preferred dipping sauce however is the ‘Nam Prik Noom’ a fiery dip combining flavours of toasted green chilli, onion and garlic. If no feasts planned during your visit you can still find these dips on restaurant menus matched with nibbles of Kap Moo (deep fried pork skins), sticky rice and a selection of vegetables. 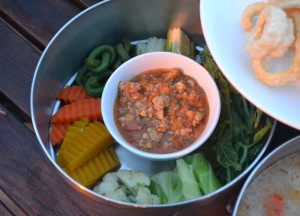 A tender, stewed pork curry which reminds me of the generic microwave ‘curries’ of the UK (if that means anything to you). The sauce of Kaeng Hang Lei is the least spicy of curries I’ve come across in Thailand and is slightly fruity with tastes of tomato. Of course 100% delicious and makes the perfect curry for those with a less fiery palate. Kaeng Hang Lei brings a slight Burmese influence infusing turmeric with tamarind, ginger and garlic. While popularity doesn’t quite match the Khao Soi curry it does rank highly on Northern Thai menus. Another favourite at Khantoke feasts. 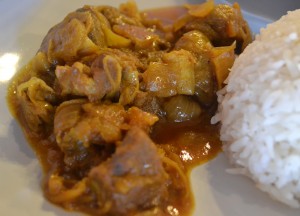 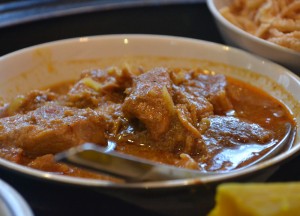 Miang Kham is essential nibble food and offers the perfect introduction to Northern Thai Food and essential Thai flavours. With Miang Kham you can pick and mix your own combination of sweet, sour, salty and hot flavours. Wrap ingredients in a Cha Plu leaf and pop in your mouth. While ingredients vary with Miang Kham they do normally include a similar set of shallot onion, chillies, ginger, peanut, coconut and lime bits. While occasionally found on restaurant menus the Khantoke table is the better option. Also available pre-wrapped or sold as sets in local markets. 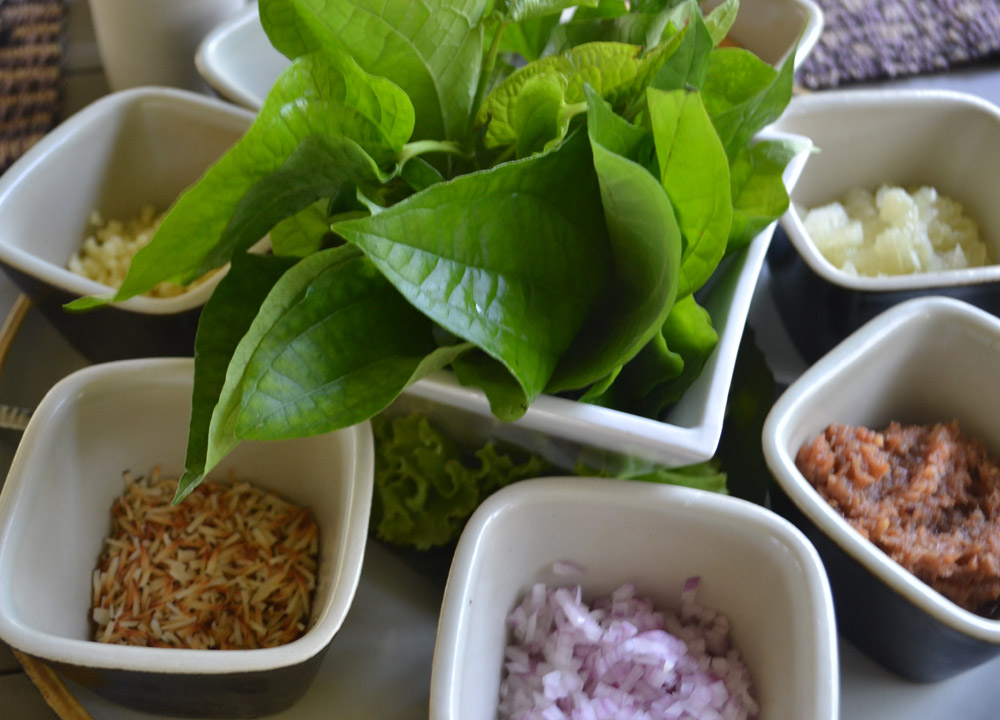 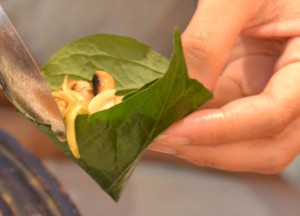 A minced pork and sticky rice sausage with a unique sour taste from a 2 day fermentation process. Flavoured with garlic and chilli this meaty treat is not so different to the better known Isan sausage from nearby North East regions. It is also one of the few Northern Foods common to Bangkok streets often found sizzling and skewered over hot charcoals at city street food vendors. While Naem can be eaten raw I would stick with the cooked option. 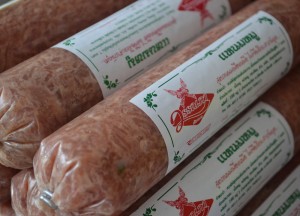 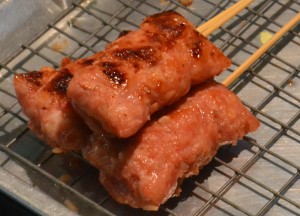 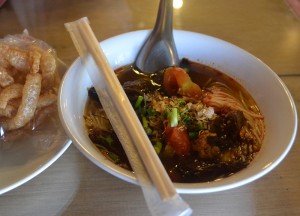 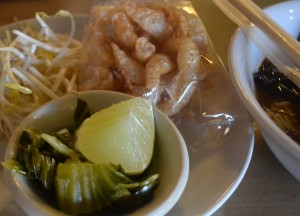 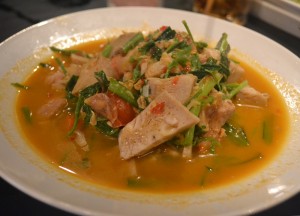 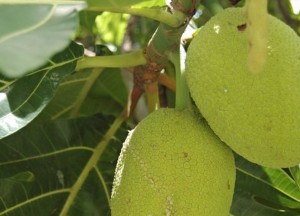 A boiled pork sausage with white complexion and rubbery texture. Moo Yor is one of the most common Northern Thai Foods and is therefore in need of a mention. Alone Moo Yor doesn’t really compete with the spice of Sai Oua or sour of Naem and because of this I have made a meal of it. The meal is Yum Moo Yor which fuses the Yum Moo steamed pork with a fiery salad of chillies, fish sauce, lime and coriander. A common dish in restaurants of Northern Thailand. For Moo Yor meat you can easily find it at roadside shops, wrapped in green banana leaf and stacked in pyramids. Costs roughly 30 Baht a packet. Feel free to eat whole like a giant, meat sausage. (Note Moo Yor is also popular in Isan food and is famous in Ubon Ratchathani) 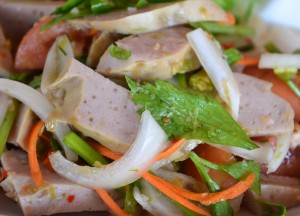 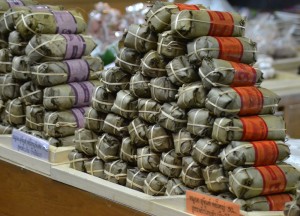 As always… drink the local liquors. On my recent trip the drink of choice was Maa Kratoop Rong which was the name of the added herb ingredients in the locally produced moonshine rice liquor (pictured below). Very similar to a Yaa Dong mix of Lao Khao. Potent alcohol mixed with ‘health enhancing’ plants and herbs. Today’s tipple said to give power, alertness and most importantly acts as a strong aphrodisiac. Like liquid viagra although I can’t say it worked. Again the best place to these local concoctions is at Kantoke feasts served alongside nibbles and Traditional Thai dancing. 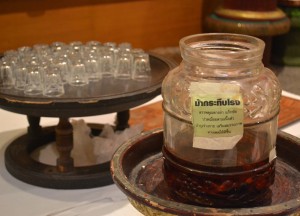 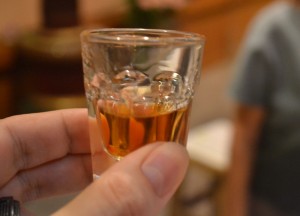