We were completely clueless to the situation in Taipei when we arrive, and we go about the day as we would any other. We travel out to the coastlines, which is the exact opposite of where we should be going, on a day trip to Jiufen. It isn’t long before winds pick up and the skies turn ugly. We are fortunately on the north coast of the island, and while we’re not in the direct path of Typhoon Soudelor, we quickly realize that something is off. We bus back to Taipei early and back to our base in the Ximending area of the city. At this point we are still completely oblivious to the typhoon barreling towards us.

At the hotel I flick through international news to spot an article about a young girl drowning in Typhoon winds on the coast of Taipei. For me this was the first mention of the coming typhoon and it was already on the east coast, just hours from where we are now based. After a bit of Googling I find some unexpected, and disturbing, headlines. Typhoon Soudelor is “The strongest storm on Earth this year“. Typhoon Soudelor “could land a direct hit on the Taiwanese capital of Taipei with the same force as 2005’s devastating Hurricane Katrina“. My night market plans are abruptly cancelled as I begin to shit myself. Landfall, when the center of the storm arrives to land, was expected in a few short hours and we have little more than an hour, maybe two to prepare (it is now roughly 9pm). The outer rings of the Typhoon are already moving across Taiwan and heavy winds and rains are pounding the streets around us. Concerned, I ask about emergency procedures to the hotel receptionist “Don’t worry, it’s just wind and rain”. I pry, but again “Don’t worry. We’re Taiwanese”! Fair enough. I run to the nearby 7-11 for emergency supplies of crisps, sushi rolls and beer, to find the same lax attitude on the streets. There’s no concern in anyone. I stand at a corner drinking ‘Whisbih’, an ingenious mix of Whisky and Beer, and marvel in the calm which surrounds me. As a category 3 Typhoon bares down on us, no-one  seems to care.

At the hotel we prepare for the impending onslaught by unplugging electrics near windows and hiding survival snacks and valuables in the bathroom. My main concern was the window smashing through and, given this scenario, we would move to the bathroom and barrier ourselves in with the mattress. This was the worst case scenario, but one we needed to consider. Our room is on the 5th floor, of a 7 story apartment block, in the back streets of the Ximending area. It is a fairly built-up area and between us, and the building opposite, is a narrow dimly lit lane. We at least feel safe from flooding at this level. Within the hour the Typhoon winds hit and through the night we endure relentless rumbling as gusts batter the windows next to us. The experience reminded me of them auto carwashes only this was with a lot more danger, and it would continue non-stop for 12 long hours. It’s very unnerving with it’s unpredictability. My main fear, however, was with the windows next to me which, giving way, would let torrents of wind tear through our small hotel room. This fear would have been a lot worse had our hotel not been fitted with bars over the windows. Through the night there was continuous rattling, breaking, crashing, and intermittent wailing of emergency sirens passing on nearby streets. At times the building would creak and shake under the force of winds then there’s the eerie bending and buckling of metal awnings from surrounding housing. I wait up for landfall, which was said to be at around midnight, but it officially hits at 04:40am. The speeds at this time would be up to 173km / hour in Taipei (Hurricane Katrina was 203km) but I fail to tell the difference between the initial, outer winds, and those closer to centre. I dose off at around 3am waking at periods throughout the night. Fanfan manages to sleep early, but also wakes early when she hears something crashing into the building. At sunrise the winds continue and it isn’t until 10am when I feel safe to open the curtains and take a look at the damage. It is still windy at this time but it feels less life threatening. The first I see is the opposite apartment with torn electric cables, broken window shutters, and what looks to be a metal sink flung around the balcony. This was just the beginning of it.

The Tail-End of Typhoon Soudelor

The eye of Typhoon Soudelor passes below Taipei, but we in no way go unscathed. Looking at aerial views of  the typhoon, it shows to be 3 or 4 times the size of the island itself, and Taiwan is engulfed in its entirety. Nowhere is safe, and in total 4.85 million households had lost power, including many in Taipei. We were one of the fortunate few to keep power, and through looping news channels, we have a fair idea of the damage before venturing outside. It is after midday when we do as we go explore the local Ximending area. Outside we find the streets and shopfronts torn apart, motorbikes thrown around and toppled like toys and trees uprooted and blocking walkways. While the winds had subsided, to some extent, it still feels far from safe, but, despite dangers and devastation, the main street is already open and bustling. I honestly can’t understand why. Debris is still being picked up and thrown through the streets, and the stronger gusts send people running for the closest shelter and shop doors. It felt more of an act of defiance than anything and we were quick to scurry back home. We didn’t feel safe whatsoever and winds are still like nothing I’ve experienced before. We turn back not far after the entrance with the iconic billboards of Ximending where there is loud clattering from above as metal doors flap open and shut on the top billboard. 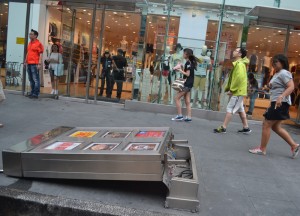 We spend much of the day watching Taiwanese news which is oddly upbeat and optimistic. Much of the devastation is taken with smiles and a sense of humor as people come from hiding to take selfies next to bent post boxes and other unlikely mishaps from the winds. Typhoons hit Taiwan on average 3 to 4 times a year, so it is something they have learnt to live with and it’s almost like an annual event here with “Typhoon holidays”. Kids apparently love them when they get days off school, to stay indoors and play video games. The day after the Typhoon we are out again before midday and life is normal with busy streets in Ximending; families, tourists, queuing for restaurants and much of the damage has been cleared up and repaired. We eat in Modern Toilet, a toilet themed restaurant, which was bouncing with kids on their Typhoon Holidays. The billboards of Ximending (below) had been renewed and it felt almost as nothing had happened. The resilience and optimism of the Taiwanese is quite spectacular. By now we felt safe enough to travel we take the MRT out to Zhongqiang Park (Xiangshan Station) for a better viewpoint over the city (below right). The park was in devastation with trees lying in all shapes, yet the locals just pass round them, and the trees landing on the kids playpark just made for added excitement. The last I heard only 8 people died in total which, while tragic, is remarkable considering the potential for devastation which this category 3 typhoon could bring, 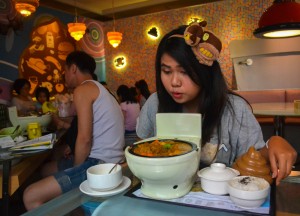 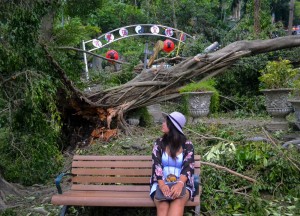 2 thoughts on “Braving the Storm: Typhoon Soudelor in Taipei”