The journey to Vang Vieng was easier than anticipated and, while we did choose the wrong mode of transport, it wasn’t so much the bumpy dirt track which we had expected. The road these days is now well trodden and comfortable, but this doesn’t take from that first moment of relief when we arrive to the Riverside Boutique Resort. Where, following  my first shave in weeks, I transform from a scruffy backpacking vagabond, to a clean-cut discerning traveler. Or at least as close as I come to either. For many this occasion would be a well deserved respite between the larger capital cities of Vientiane and Luang Prabang, but, for us, this Vang Vieng hotel was the destination, and the views were the centre piece. And they do not fail to impress. The views from our balcony are truly outstanding where we have one of the most beautiful scenes of Southeast Asia set on our doorstep. It’s all ours. 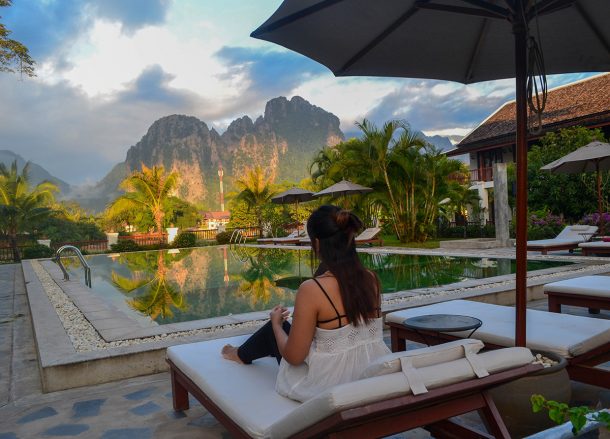 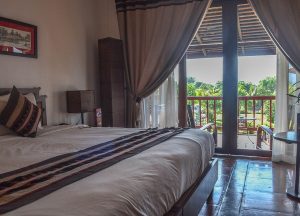 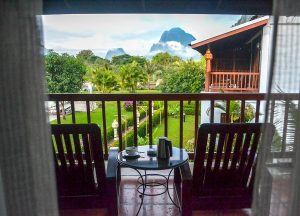 We really couldn’t be more centrally located where, at the Riverside Boutique Resort, we are right next to the passing of the rickety wooden toll bridge. This is the main crossing to the west side of the Namsong river, which in itself is a charm to watch over from the restaurant balcony. The first night at the resort was just so memorable as we watched through twilight as the daytime traffic fell into serene river scenes. The birds and buzz of river boat propellers fade to a chorus of Namsong river beasts and traditional Lao music from opposite riverbanks. At the same time I somewhat expect the yells and rumbles of parties and banging house of the destination’s past reputation. And to be honest I have always been put off by the past picture of Vang Vieng due to its former party scene. With non-stop drink, drugs, parties and tubing. While it probably still goes on somewhere, I feel it’s either gone underground, or it became more civilized than before. Or it may have just been over exaggerated to begin with. 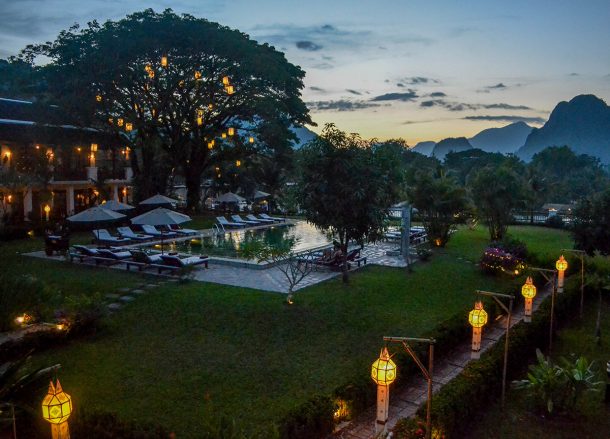 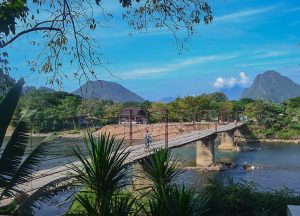 As far as destinations go Vang Vieng has everything going for it. It has the views, it has the adventure, and the tourist infrastructure has always been there. But following the exodus of backpackers in 2012 the town did lose its niche. Since then it feels to have been in a hiatus, a time of transition, as they try to shake off the old stigma and replace it with more diverse and ultimately lucrative markets. Now, what once was the place to avoid for discerning travelers, is an unlikely gem. And the Riverside Boutique Resort appears to be leading this transition where it does seem already to be well-known by French expats and the well-heeled Thai and Asian travelers who got here first. And this upmarket demand is now becoming obvious with the increasing development on the near side with new mid-range and luxury hotels on their way. With these new demographics come newer high-end tour options as well (which are still ridiculously cheap) like hot air ballooning, ultralight aircrafts and ATV buggy tours. I even felt somewhat proud to be part of the town’s tourism revival, because it no doubt has a whole lot of potential. 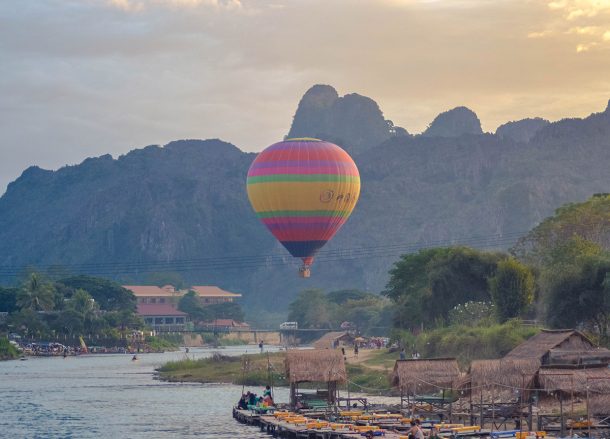 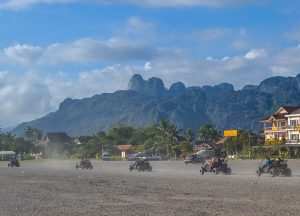 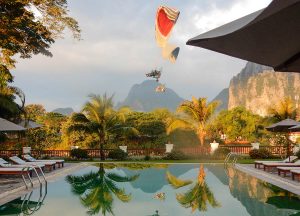 A Small Place, With Lots to do.

There’s almost too much to choose from for activities so I won’t go into them all. You will however be spoiled for choice. Instead, as with any new destination, the first thing we do is go in search of local life. Or in Vang Vieng’s case, rural life. There has been a misrepresentation of this area saying local life is lost or depleted, which is of course inevitable with the tourist side of town. But it only takes a short walk to escape it. All we do is cross the toll bridge beside us and soon we find ourselves in a small semi-rural area with authentic local life. Bikes, umbrellas, traditional dress, school kids, and all sorts of  weird transport! A short distance further and we’re in the rice fields. We do this on foot and it takes no more than five minutes from the hotel doors. We hire a motorbike from the resort and travel out to the viewpoints, caves and blue lagoons passing scattered settlements of authentic Lao rural life. It’s just a really nice area to explore. 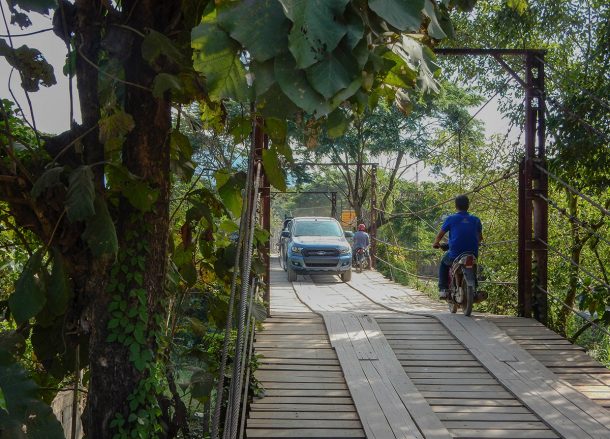 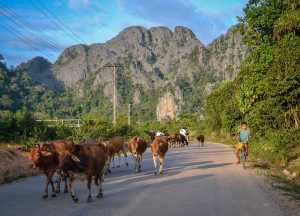 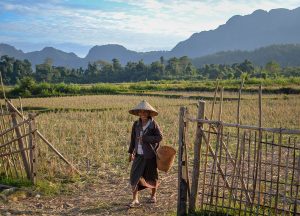 We did of course research food before arriving to Vang Vieng, as we are predominantly food bloggers, but all we found was a recurring theme of wariness. Travel Fish, the savvy Southeast Asia travellers, say that the “dining scene leaves much to be desired” in Vang Vieng which in itself may be an understatement. But there does appear to be one restaurant we all agree on and that is The Riverside Boutique Resort and it does appear to be the only place to escape the sandwiches, pancakes and backpacker food experience. Lonely Planet even list it as their only recommended restaurant in town. So it is somewhat unanimous and going by its far-flung location this probably makes it the best restaurant in a 130 kilometer radius. And in many ways this is what the resort represents. An oasis of luxury in an otherwise barren land. Personally I went for the laab which to me offers the best representation of any Lao kitchen. A kitchen in Laos is only as good as its laab. And the seasoning and flavour at the Riverside Boutique Resort are no doubt top-notch (we live on home cooking in rural Isaan. We know our laab). And ultimately we enjoyed a relaxed evening with reasonably priced food, considering its standard. And went on to some serious cocktails at the pool. 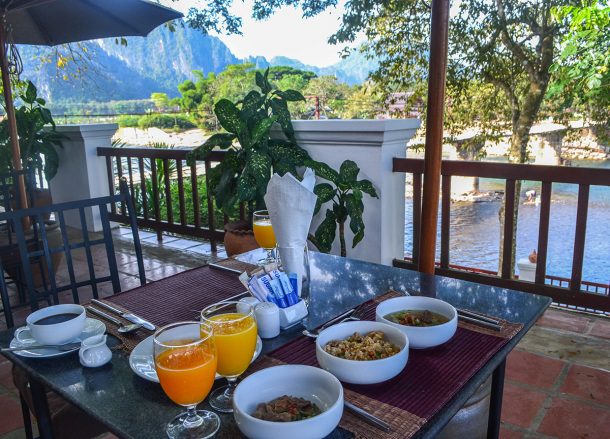 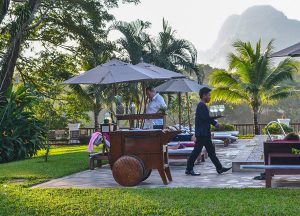 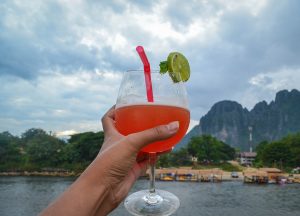 2 thoughts on “A Luxury Revival in Vang Vieng”