Please don’t encourage cruelty at monkey tourist attractions truth is you will find endless opportunities to meet real wild monkeys, living their normal monkey lives in Southeast Asia. Monkeys found almost everywhere in the region. Monkeys which we have taken for granted while living here. It wasn’t until recent chit-chat with an Argentinian traveller did we realise this. “I really want to see monkeys.”, “What monkeys? A certain type of monkey??”, “No any monkey, do you know where to find them?”, “Where do I begin…” I think the reason we take monkeys for granted is because they are annoying. We spend more time avoiding them than trying to find them. You will likely feel the same after your first encounter or two. Monkeys in Southeast Asia, or at least many of them, are irritating. They will confront you, grab at you and given the chance steal from you. Do be careful around them. Don’t stand still, don’t act frightened, don’t have loose belongings and if you plan on feeding them… good luck. If monkeys come too close or appear threatening swing a boot in their direction and they should back away. Over the years we have met numerous monkeys in Southeast Asia. To the despair of Fanfan the monkey hater. Fanfan and monkeys have never been on good terms, from a monkey jumping on her head to a broken laptop incident (snigger). Here are some of our more memorable encounters with monkeys in Southeast Asia (and beyond). From urban cities to remote islands.

The most common monkey in Southeast Asia and easily the most annoying. These Macaques give other monkeys a bad name. If you do plan on finding them try Lopburi Town in central Thailand a town ruled by monkeys. Menacing residents, stealing from vehicles, humping roadside. Urban pests. On my last visit one tried stealing my camera bag. If this happens to you swing the bag round your head until monkeys gets dizzy and he should let go. Other notable encounters include Langkawi Islands (Malaysia), Ubud Monkey Forest (Bali Indonesia), Khao Takiab Krabi (Thailand), Monkey Beach Ko Phi-Phi (Thailand), Batu Cave Kuala Lumpur (Malaysia) and Erawan Falls, Kanchanaburi (Thailand).

Same monkey different name. Crab-eating Macaques are no different to the long-tailed macaques. The only reason for adding them here is to share our experience at Monkey Beach, Ko Phi-Phi where we arrive by boat to hissing and snarling. Fanfan being friendly goes to make peace but mummy monkey jumps from branches above to land on her head. Fanfan backs away as the monkeys gather in trees above and we scarper as the boat skipper fends them off by swinging a rope. Monkeys can be territorial so try not to piss them off. Thankfully these are some of the more aggressive monkeys in Southeast Asia.

Rhesus Macaques are also found within Southeast Asia. In honesty I couldn’t tell the difference between the Rhesus and long-tailed Macaques, other than being nicer and more docile on this occasion. Here we meet on the road to Sikkim in the Himalayas. The encounter memorable after finding a dead monkey lying face down on the road having likely been hit by a passing vehicle. Sad.

The dorks of the macaque family. Both these ugly haired monkeys are endemic to Sri Lanka. The Toque Macaque unique to Sri Lanka alone (found nowhere else). If planning on finding them try the Temple of the Tooth (Sri Dalada Maligawa) in Kandy where they roam in surrounding grounds, climbing things and eating from bins. Monkeys like bins.

Easily my favourite of monkeys in Southeast Asia but also one of the harder to track down. Our most recent Gibbon encounter was in Railay, Krabi where we wake to patters of fruit and branches on the roof of our seaview bungalow. When we go to investigate an adult Gibbon swings down. Fanfan jumps back, lands on the laptop, broken laptop. No photos on this occasion so I will instead share Loy (video below) a baby Gibbon we meet in Ko Tao, Thailand. Loy is no longer wild having lost his parents. He was later found and adopted by local fisherman in Ko Tao. Below is a video of Fanfan rubbing Loy’s belly. Loy likes having his belly rubbed.

We meet these Gray Langurs at Dakshineswar Kali Temple in Kolkata. Again slightly off track but I can’t help share these gangly, limbed primates. Looking odd, sitting awkward, bored, seemingly unimpressed in their surroundings. Surprisingly humanlike. They are also spoilt. Hand them a banana and they will likely throw it on the ground. Fatty on the right was particularly disgusted by the suggestion of banana eating. For a city in such poverty these monkeys are just plain rude.

We cross paths with these Langurs along the coast of Malawati Hill in Selangor, Malaysia. What fascinates me about them is their young. Baby Silver Leaf Langurs are born a bright ginger colour before hitting puberty and turning silver like the rest. 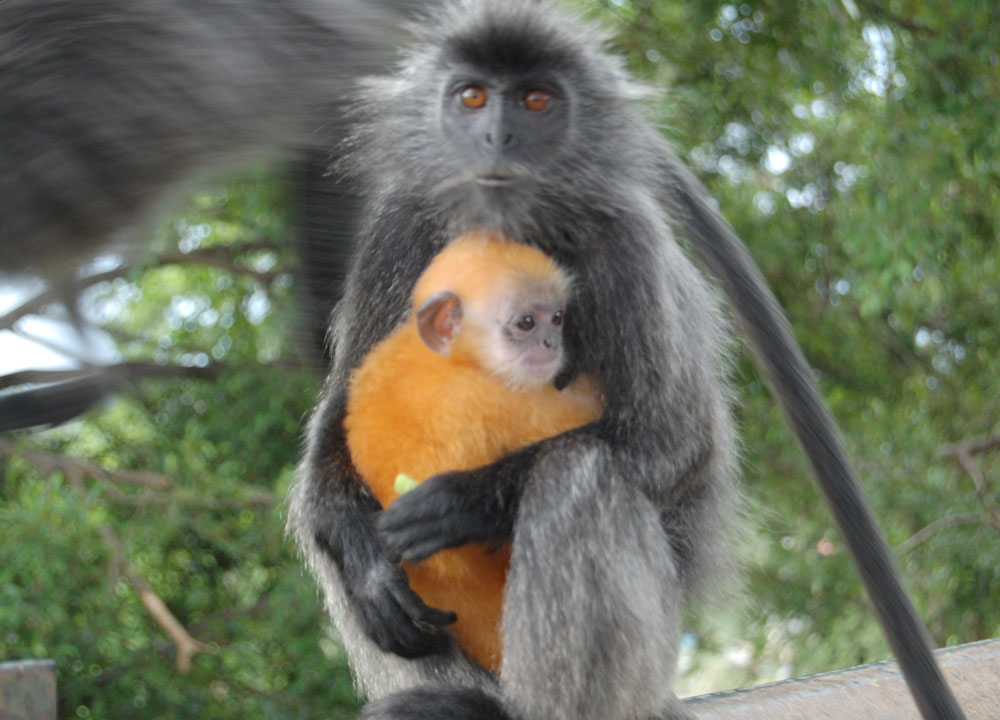 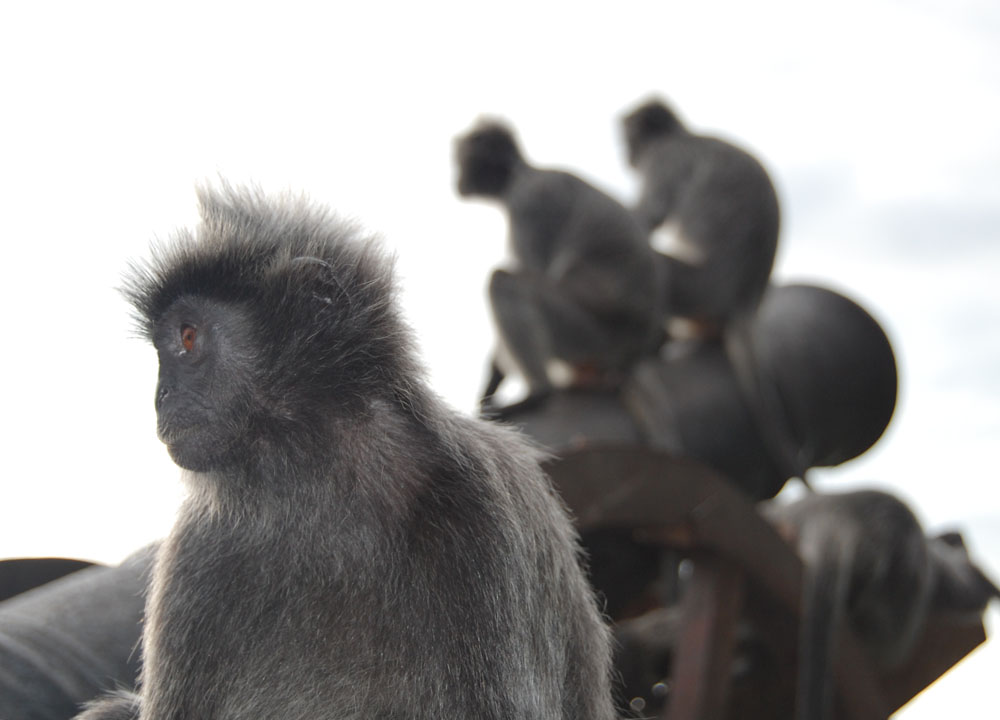 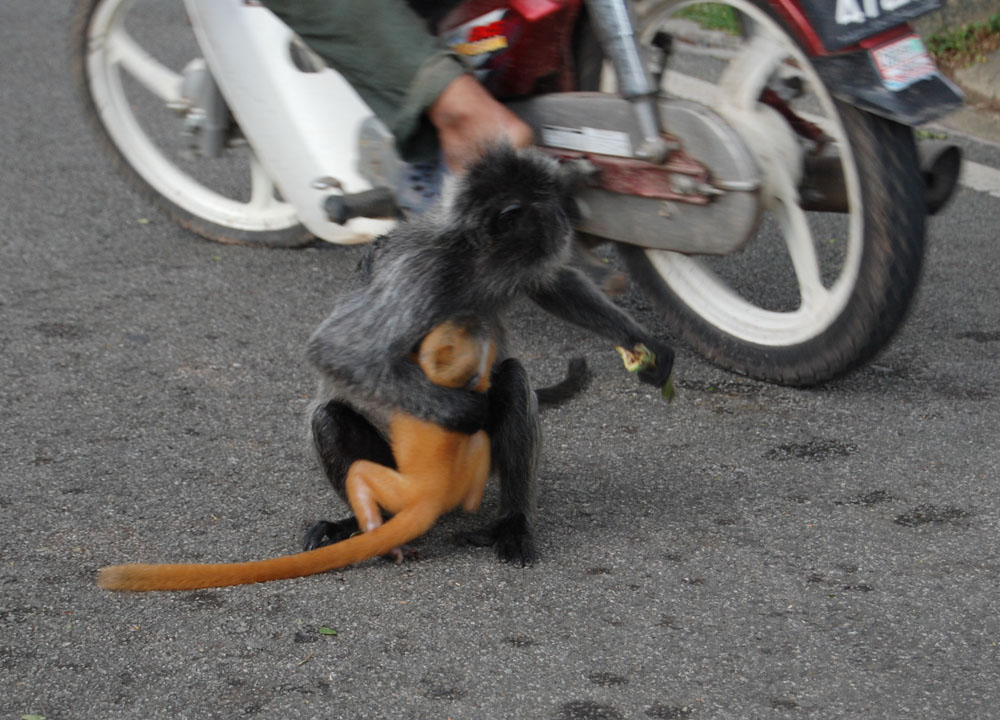 You will be lucky to find Orangutans in the wild these days. For the next best thing try Sepilok Orangutan Sanctuary a rehabilitation centre for baby orangutans orphaned by deforestation and other hazards. Note young orangutans can tear human limbs from the body. Bigger orangutans could likely punch through your face. Not to be trifled with.

The big nosed monkey. With a unique eating pattern the Proboscis monkeys are drawn to certain areas of Borneo. Areas which have Pedada trees where they stuff their faces with tasty leaves. This makes the Proboscis Monkey easy to track down. We catch a rare glimpse in Beaufort, Malaysian Borneo. Not a close encounter so I have instead stolen a photo from Wikipedia for illustration (bottom).

4 thoughts on “Monkeys in Southeast Asia”