Seven elevens are pretty much essential these days in Thailand, whether it’s expat paying bills, locals buying online purchases, or adventurous travellers indulging in traditional ham and cheese toasties. Because the “ham and cheese” has long been a staple for many visitors to Thailand, as they really were just one of very few “western” snack options found widely available throughout. But this is no more, as Thailand’s seven eleven’s have come on leaps and bounds through the years, and this is an update to share some of the new NextGen options of corner shop snacking. This is beyond the ham and cheese. Also, check out our new video, eating weird Thai 7-11 stuff, below 🙂 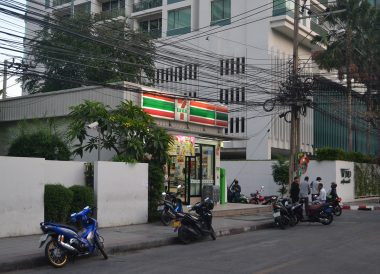 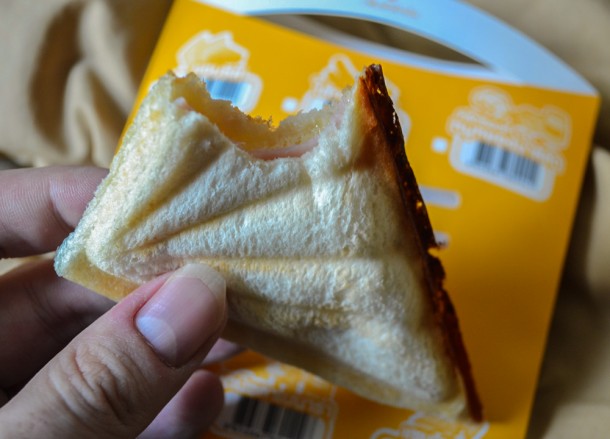 The ham and cheese toastie was never sought after for its deliciousness, but its convenience, as a last resort of sorts, out of desperation. But these days there really are some delicious alternatives, and my personal favourite would have to be the rather fancy “Gold Selection” which fuses various cheese flavours, with the delightfully puffy “croissant” style bread. But the options do go much further than the traditional ham and cheese these days, including a carbonara toastie, the pork cutlet toastie, and of course tuna, cranberry, and riceberry toastie. Not to forget the alternative sweet toasties, giving a dessert option, like the chocolate toasted sandwich or green bean paste. It’s really an exciting time for toasties at the Thai seven elevens. Note they do have a toastie maker at the counter. Just grab the sandwich of choice, and hand it to the counter workers, and you can eat on the go. 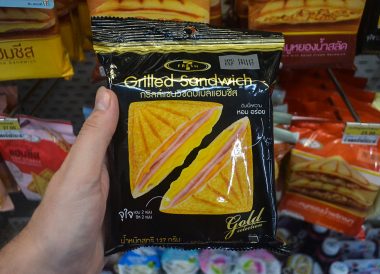 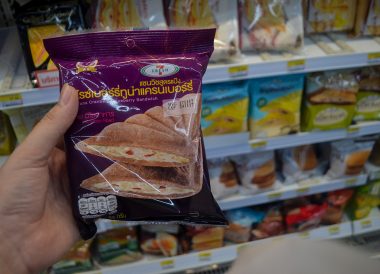 Jumping straight to booze, because I like booze.  So the Seven Elevens do stock the usual big bottles of Singha (the tourist favourite) along with Leo (the local choice), Chang (my personal favourite) and U Beer (the newcomer). But at seven elevens they are all sold in tins, making it easier to booze out front, or on the go. They also have an alternative range of “Cheers” beers, which are all pretty rotten, but are good to mix up the routine. Then there is the Smirnoff range, and while I generally avoid alcohol-pops, the Midnight 100s (7% abv) make a decent midday pick me up. However they don’t have many Japanese options (yet), like Hi-Balls, Chu-Hi’s or One Cup Sakes, which you may expect from these “Konbini” inspired giants (chop chop seven eleven). Behind the counter there will be the usual Sangsom Rum, Blend 285 Whisky, and of course Lao Khao, along with a very welcome addition of Bells Scotch Whisky, which isn’t much more expensive than the local bottles. Note, they did have Leo Beer on draft for about a week, until some rotters complained, and had them removed. 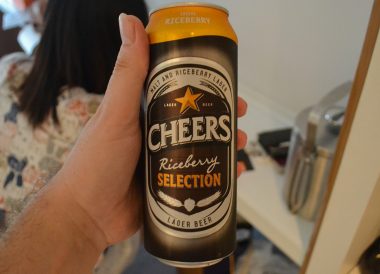 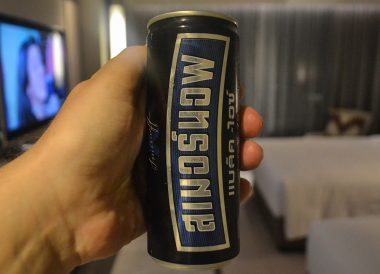 These days there is an impressive range of burgers at the 7-11, but few stand out as overly eatable, to be honest, and, from what I’ve tried, they tend to be relatively disgusting (not even close to Rustlers). And this is to do with the microwaving process (or “wave” as you ask at the counter) which results in a fluffy, greasy, soggy bun, and questionably heated meats and fillings. For this reason I opt instead for the sticky rice burgers more often, which are more Thai inspired, obviously, and they really aren’t that bad. They will also be locally inspired with sticky rice street food staples, such as Moo Ping (marinated pork), or a spicy Kaprao Moo Zaap (pork and holy basil) sandwiched in sticky rice. They really are a bit genius, although I’d really just stick to the street food originals, because they are again microwaved. 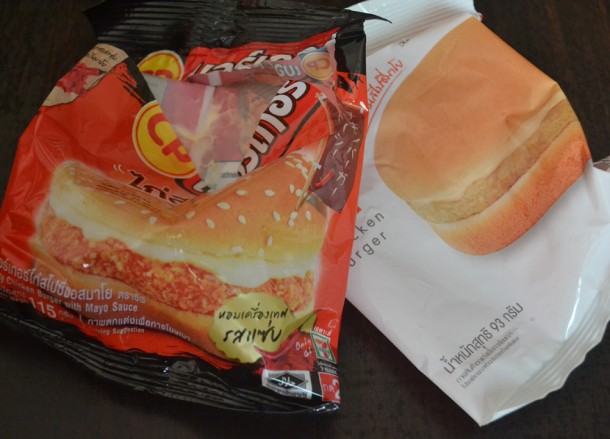 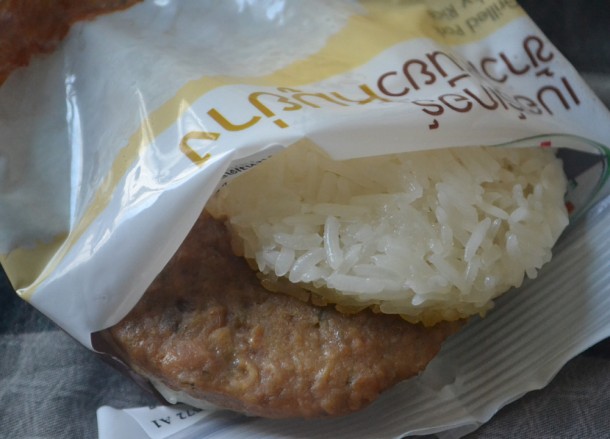 Hot Dogs were once my go-to option at the 7-11…. until the 7-11 ruined them. As the original 7-11 hot dog came as a delicious, albeit rubbery, reheated sausage, in a fresh bun, and optional garnishing of lettuce, cucumber, mayo, mustard and ketchup at a standalone counter. They were decent ‘dogs. But then the 7-11 scrapped my beloved dogs, and replaced them with a reheated microwave packet option, with ingredients all slopped together, bun, sausage and a horribly sweet sauce. And it has to be the worst to happen in Bangkok’s food scene, since KFC dropped their green curry. And I remember the first time I bought the new dog (below left) while stranded in heavy rains at my local 7-11. At the time I gifted it to the homeless woman out front, and returned to get a second, only to find her asleep when I got back, spoiling the magical shared hot dog moment I had planned for us. Anyway, she either ate it super fast, bagged it for later, or just binned it, and I’m going with the latter. Bring back the original hot dogs. 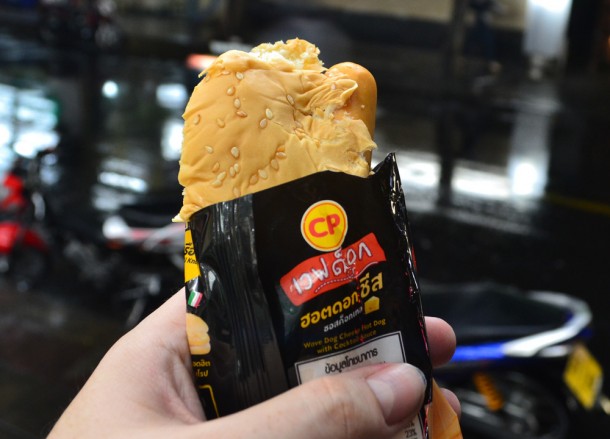 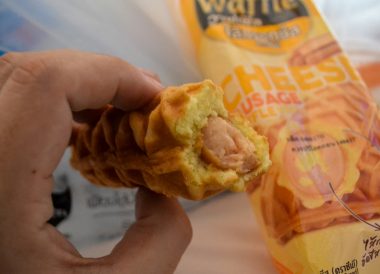 They do at least still have the sausages without the dog, and while I’m not a big fan of Wieners or frankfurters, or whatever these rubbery attempts are called, you’ll be hard-pressed to find a decent British pork sausage anywhere. But as far as 7-11 foods go, they’re really not that bad. So there is an impressive sausage selection of sausages and heated meats on the 7-11 shelves, and among the best of them is the “footlong spicy” (or “spicy footlong” as a normal person would say), which is a chilli infused Wiener, served in bite-sized cuts, and bagged with a choice of added ketchup or chilli sauce. Eat with a skewer stick, and expect occasional tough pieces of gristle. While these sausages are often found packaged in the shelves, occasionally they are sold from a rotating display on the front counter unit, looking dry and wrinkly, and potentially they have been there for days. For a more local Thai style sausage, try the vermicelli bite, or maybe some Naem pork. 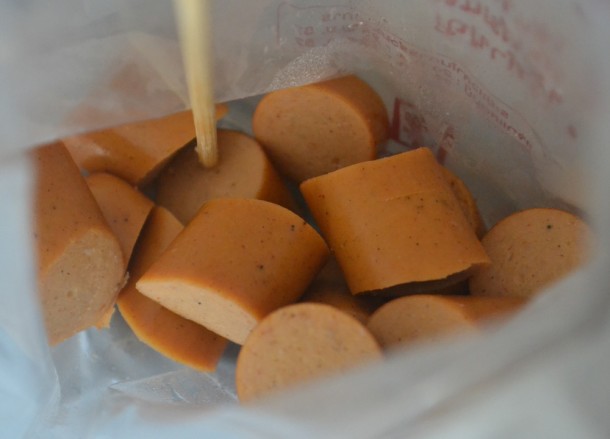 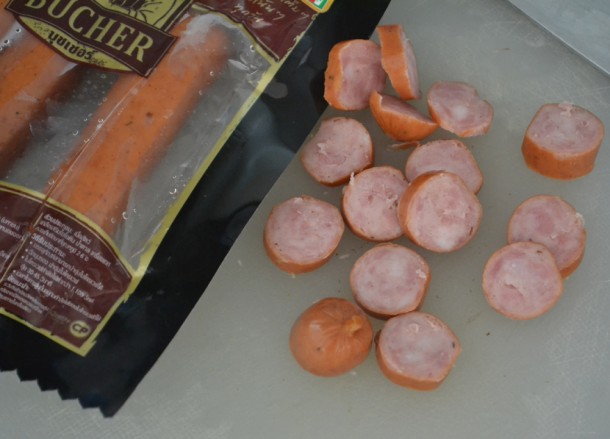 Seven Eleven obviously originates from Japan, as do FamilyMarts, and Lawsons, because Japan is king of the konbinis (corner shops). But seven elevens in Thailand fail to reflect the same standard as Japan, like not having Chu-His or Sake’s, and I really do judge a lot of things on the availability of alcohol. Otherwise they do offer a handful of Japanese snacks to look more worldly, such as sushi rolls, and onigiri, and my favourite Japanese Gyoza dumplings. In fact Gyozas became my new go-to favourite, replacing the loss of their hot dogs, although they are still microwaved, and kind of crap. I was more replacing my mustard binges with the delightful tartness of rice wine vinegar sauce. As sauces tend to be what makes seven eleven foods more bearable. Oh, and of course there’s the katsu terriyaki toastie, although this really is more of a fusion option. 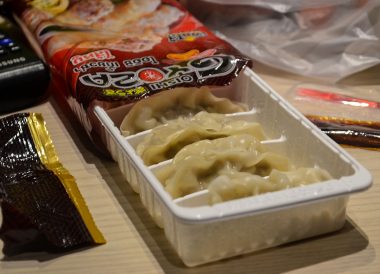 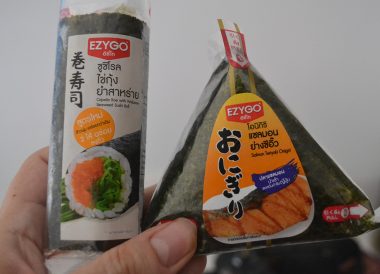 The Chinese bites at seven elevens remind me of snack shopping before long-haul journeys at the 7-11 at Hua Lamphong Train Station. And it’s a last resort of sorts, when every inch of aisle space is filled with backpackers and their bags, and the last thing I want to do before eating, is brush against one. So I have no option but to buy counter food, and the closest to the door is the steamer full of bao buns (salapao) and shumai dumplings (khanom jeep). Both not great options. Baozi Buns are cheap and filling, but due to disproportionate meat to bun ratio, where the bun easily outweighs the filling, they are rough to eat. So I tend to rip off half the bun and throw it away. Otherwise the shumai dumplings are my preferred choice, although I do drown them in vinegar to help them taste more palatable/eatable. 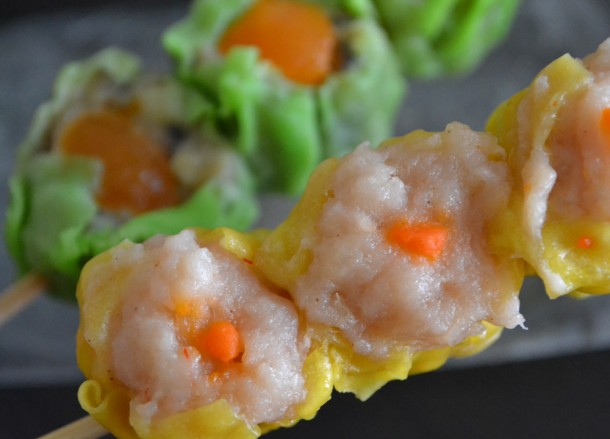 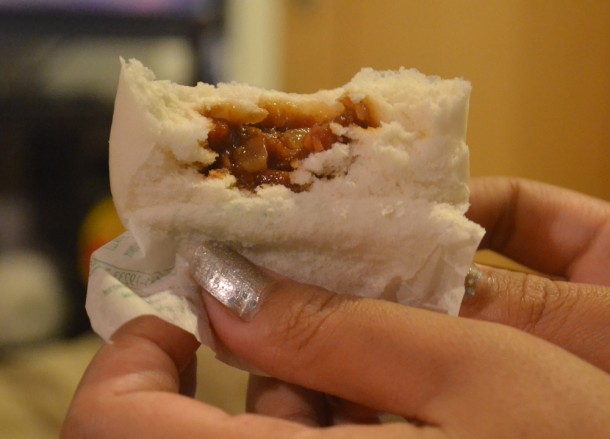 Within 100 meters of any given 7/11 will be everything that Ezy Choice has to offer, only freshly cooked, and served in larger portions. So I really don’t understand Ezy Choice ready meals at all. As they are little more than microwaved alternatives to all your shop house and street food favourites. Think fried rice, chicken rice, omelette, minced pork with holy basil, etc. Therefore the only benefit in them, is taking them home to microwave at any time. But I can’t really ignore them either, so for research purposes, I forced myself to the Ezy Choice fridge, and opted for something non-street food, and more western influenced. ‘Chicken spaghetti with tomato sauce’. Verdict? Eatable. The spaghetti is spaghetti, the meat maybe meat, and the sauce is somewhat tomato-ish. I can’t say it filled me, but it tried. Otherwise I have explored no further, so have instead included a photo of Seven Eleven Fried Acheta (field crickets). 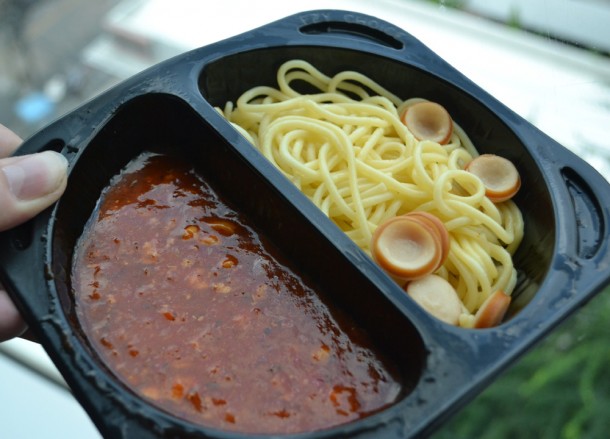 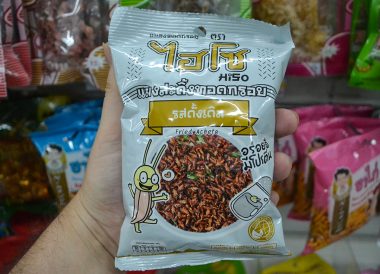 Life has seriously gone downhill when you find yourself staring into a pot of Mama Noodles. And while I am somewhat obsessed with instant ramen elsewhere in Asia, Mama noodles are without a doubt an act of desperation in Thailand, and are better suited to penniless students than expats. I’m not even sure they constitute food. Otherwise I was brought up on a rich and wholesome western diet, meaning a stumpy cup of noodles and flavoured water doesn’t really suffice. A pack of peanuts would be better. But we have all seen those rare moments of desperation, and the “Tom Yum Creamy” pots aren’t horrible, or the Green Curry Mama Noodles, although the newly western inspired options, like the spicy cheese mama noodles, they tend to be horrible. Otherwise Thai locals have been brought up on Mama noodles, and they do remain a staple in many diets, where they are cooked in all sorts of ways, like Pad Mama (fried instant noodles). They are a versatile snack. Fanfan even snacks them dry from the pack, like a giant potato crisp. 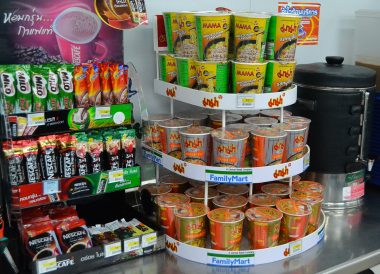 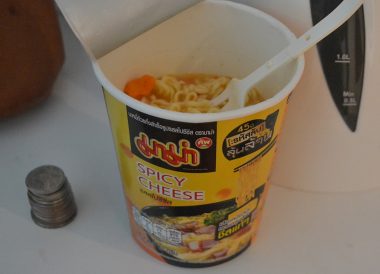 If I pulled a tin of Blueberry Fanta from my lunchbox as a 10-year-old kid, it would draw bigger crowds than two dogs humping. And while it was only a limited edition beverage, the other alternatives of Grape, Strawberry, Orange, and Fruit Punch Fanta highlight the difference in range to what I’m used to back home. There’s a whole new range of Fanta in Asia. Otherwise there is a wide range of odd drinks and local flavours to choose from, like jelly juices made from lychee seeds (that looks a bit like frog spawn) and of course “Mansome” juice. There are green Teas and tinned coffees, and just for whatever reason you maybe looking for alcohol-free beverages, there really is an exciting range to choose from. 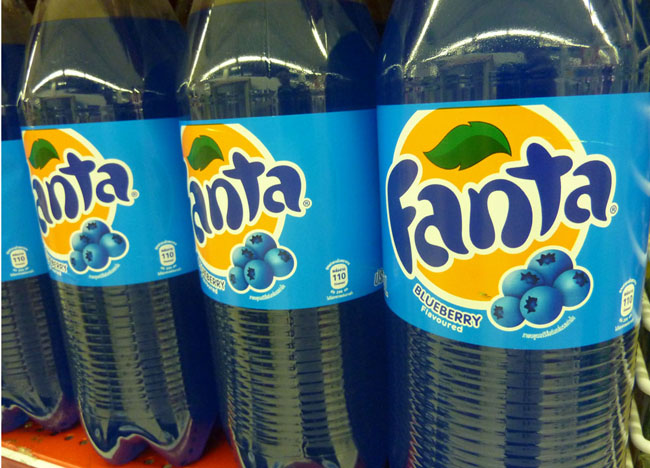 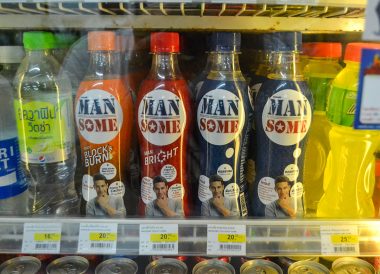