Our short visit to the Perhentian Islands began as one of the most stressful travel experiences to date, when we arrived to Kuala Besut only to find pretty much all accommodation on the Perhentian Islands to be fully booked. As you really do need to book in advance for this relatively underdeveloped destination. So following a rather bizarre frustrating time in Kuala Besut we managed to find a last-minute room online, booking a beach bungalow at The Perhentian Island Resort (online booking here). Although we initially thought it was ridiculously overpriced (but it was their last room after all). However, when we walked from our balcony straight onto the beach (Teluk Pauh Beach), and waded just a short 20 meters into the sea, we are already surrounded by some of the most fascinating coral reef and marine life. And to date it has been the best we’ve ever seen. In fact I was straight to buy a waterproof Go Pro after this trip, only 3 years later now and I’ve never used (for snorkelling). As few other destinations can compare to snorkelling in the Perhentian Islands. 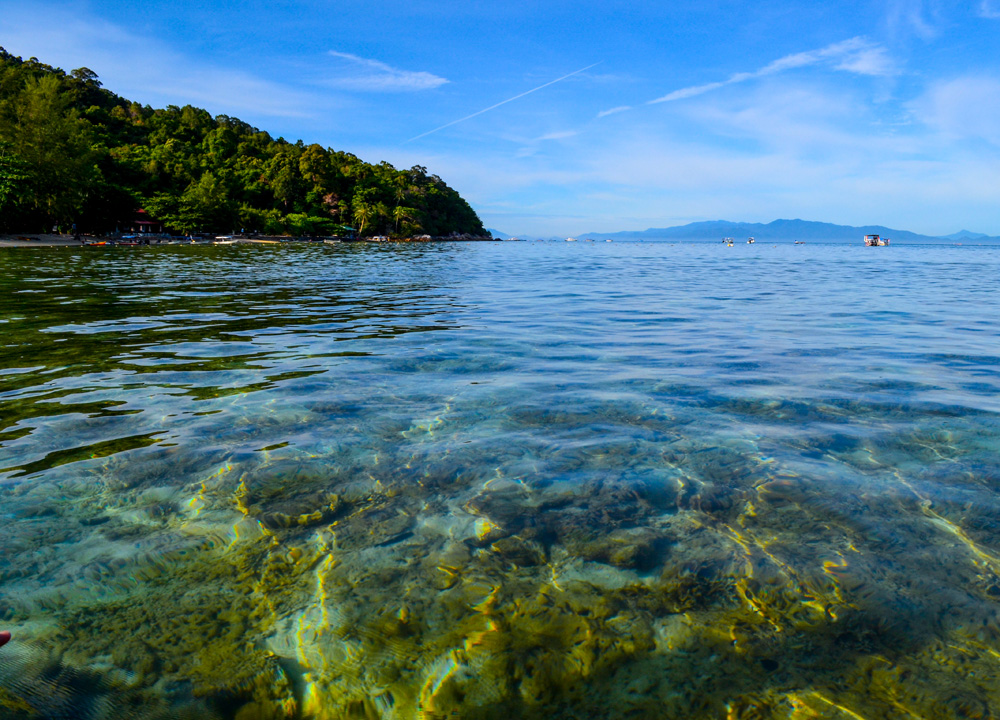 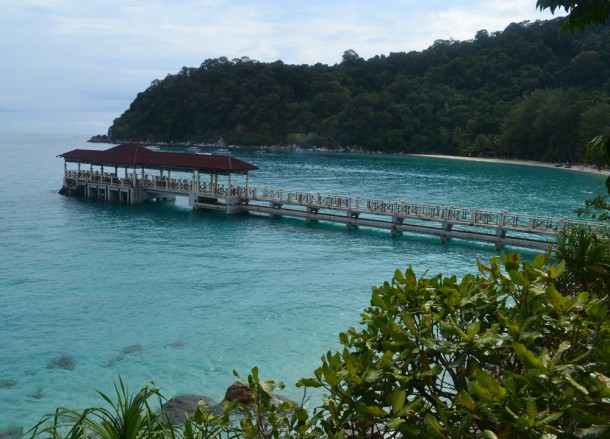 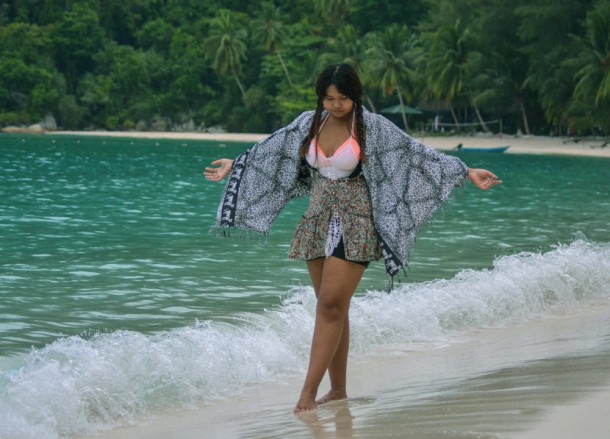 It’s really not advised to turn up at Kuala Besut Jetty, expecting to take a boat to the Perhentian Islands, and then find a place to stay. And while we passed many resorts on the shortish boat journey to the jetty of the Perhentian Island Resort, I can say our slice of the island was by far the more appealing in its surroundings. The resort itself is hidden peacefully on a thin band of beach, with hills of dense jungle on either side, and the unrelenting squeal of nature from every direction. However we only had one full day (2 nights) at the resort, which turned out to be the most fascinating of island experiences to date. We actually arrived during Monsoon season, and on the first evening a storm hit, and lightning struck the sands right in front of us in the bungalow, sending everyone on the beach running for safety (video below).  We then woke the next morning to the patter of branches on the roof, to find a family of silvered-leaf langurs eating through the branches of the mango trees above. I’ve honestly never felt closer to nature. 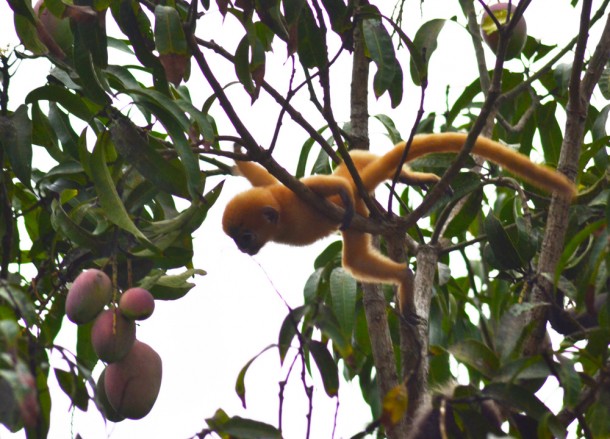 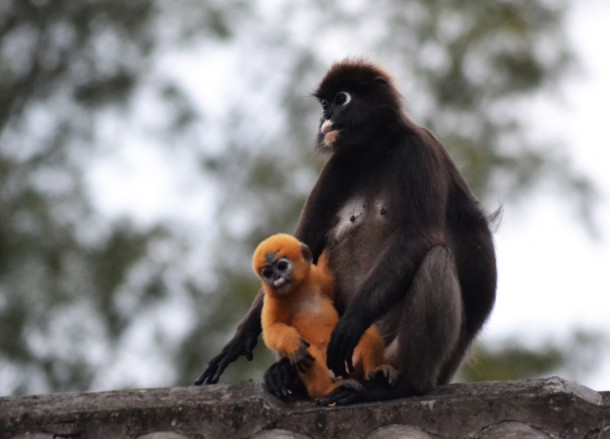 Snorkelling in the Perhentian Islands

We have been snorkelling quite a few times before, mostly around the Gulf of Thailand and the Andaman Sea. And on any given day we would count no more than 10 different species of fish. Yet on our first swim from the beach we counted 10…. 20… 30…. we lost count. Including lots of clownfish, and ray and a puffer fish. It was by far the best snorkelling I have ever seen. So we joined a snorkelling trip to explore further around the Perhentian Islands (14:00PM, including Tanjung Basi and Tiga Ruang) which was otherwise disappointing. Until the final stop at least,  when we stopped to see sea turtles, which I mistook for slow-moving rocks to begin with. Anyway, it is here that I get my bearings and realise we were literally opposite our hotel again. I could even see our bungalow. So, along with much of the best snorkelling in the Perhentian Islands, we also have sea turtles just a stone’s throw away from our beach. Where it is separated by a rope divide, to stop people swimming in the way of turtle spotting tour boats. 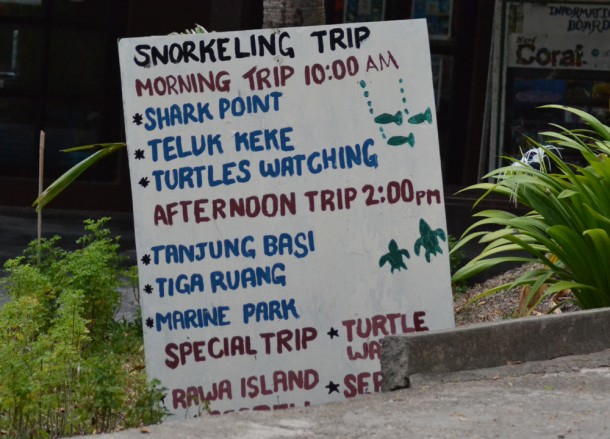 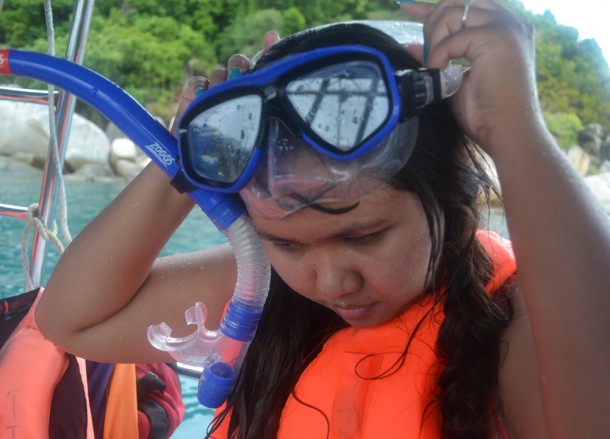 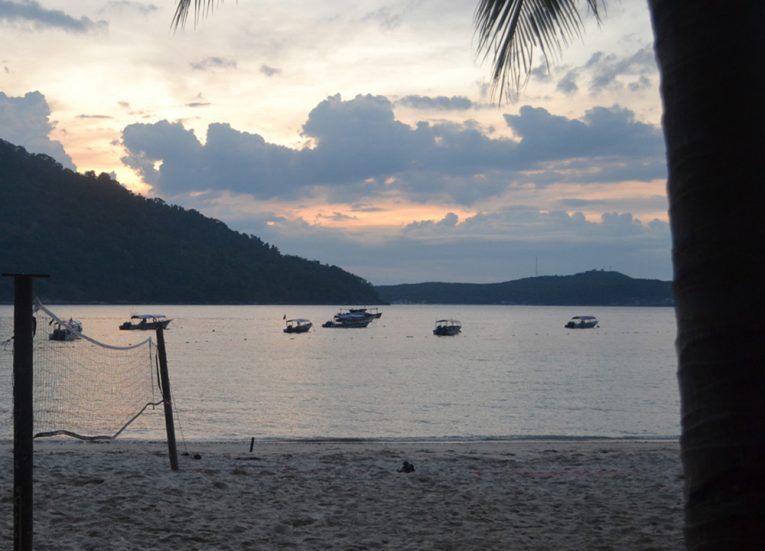 By now we had fallen in love with the snorkelling in the Perhentian Islands, yet we in no way could afford to stay any longer at the Perhentian Island Resort. It is best to book in advance (Full Hotel List Here). But I did make one last-ditch effort to find cheaper accommodation, on the morning we planned to leave, and just a short walk over a wooden walkway and between beaches, we stumbled on the Coral View Island Resort (booking here). Which was near half the price. And while it did take a short trek back to the main jetty, and the coral reef, we otherwise had some more fascinating scenery around us in the tall jungle. This included an Oreo obsessed squirrel and a slow loris which was hiding in the trees above. Again it is a truly fascinating and remote part of Asia. Note, it can be hard to find alcohol in the Perhentian Islands, and my search for rum became a fascinating story in itself (the Pirates of the Perhentians). 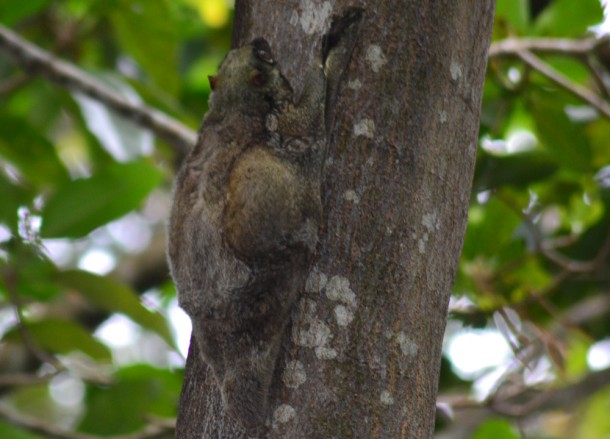 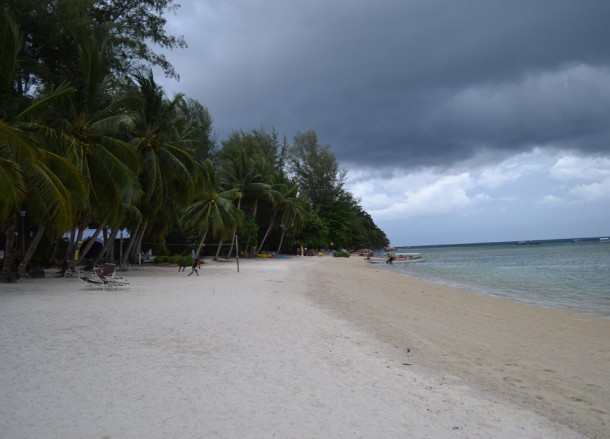