This list is bit of a mixed bunch as there was quite a bit of compromise needed (mostly from my side) between me and Fanfan. While I fail to sell her on the Maid Cafes of Akihabara, which are apparently “creepy” and “perverted”, I do manage to party with robots and indulge in other weirdness. Otherwise, we hopefully found a good mix here and most of it is relatively easy to reach by the Green Yamanote Line (incl. Shibuya, Harajuku and Shinjuku). All these are tourist friendly areas and we can reach them all using our JR passes. Anyway, here are five of our best themed cafes and restaurants in Tokyo. 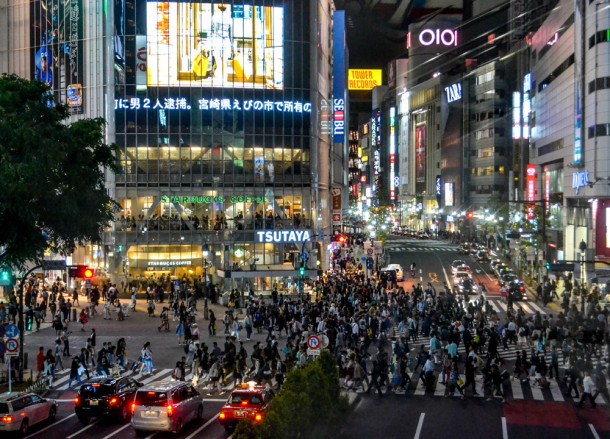 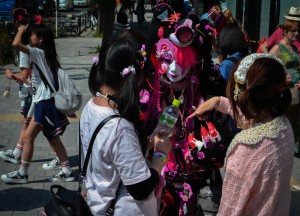 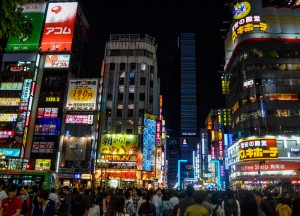 If travels went to plan we would have been touring Studio Ghibli, but, being Golden Week etc. etc. the tickets were all booked up long ago. Instead we settle for second best with Totoro Café found in the Setagaya neighborhood of Tokyo’s suburbs. It’s a bit of a hike for a bakery but Fanfan wasn’t leaving Tokyo without Totoro and I do enjoy a stroll through the quaint suburban backstreets. For me the highlight was the pensioner we ask for directions as he sits outside his suburban driveway. “Totoro café?” – “To-to-ro?” – “To-to-ro” – “Totoro”. Hearing him say the word Totoro was just adorable. Anyway, he signals us lefts, rights, and after roughly 40 minutes lost, we arrive to the Totoro Café. It is quite tricky to find so best to bring a map rather than winging it. So the Totoro Cafe, or Shiro-hige cream Puff Factory as it’s actually known, is said to be the only cafe to have an official license from Studio Ghibli, and, coincidentally, the owner’s second name is Miyazaki (Hayao Miyazaki the man behind Studio Ghibli). As expected, the café is adorably cute with all sorts of memorabilia from Totoro and other Ghibli movies. The main attraction however would be Shirohige’s Totoro Cream Puffs which are available in four different flavors; strawberry, custard, chocolate, and caramel banana. Tough to choose, so we order all four. The final bill for one hot tea pot, a cappuccino and four Totoro cream puffs comes to 2,590 Yen. Having Fanfan watch me smash Totoro’s face in with a fork, priceless. 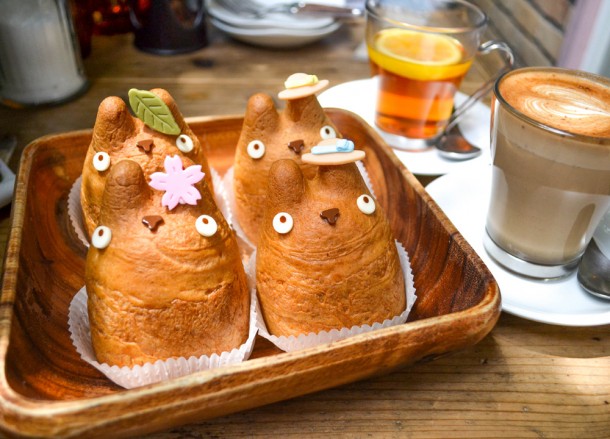 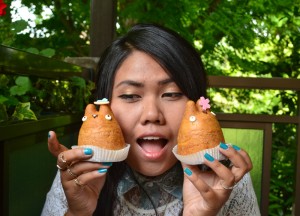 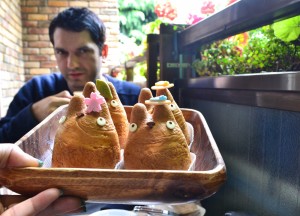 (Now closed) I don’t normally do nightlife when travelling, due to inevitable brain mush, but with all the sakuras and cuteness over the past few days I was desperate for something different. Plus I thought I’d show Fanfan just how I feel, when forced to stare into too many cute, cream puff eyes. We are in the Shibuya area (which is always convenient) where we find ourselves at Alcatraz ER for a romantic night, locked in a cell, drinking cocktails from blood transfusion packs and out of dead people’s skulls (Brain Shock). Fanfan had originally ordered the ‘Soul Charge’ but backtracked when she found that the added ingredient was an actual ‘slap in the face’ (the menu is in Japanese so we had it translated). In the end we went for the nicer options on the menu with my beer served in urinals, and food in bedpans. Ever wanted a drink stirred by a vibrator? In total we spend around 3,671 Yen, including a 500 Yen table charge per person. This includes one drink each (two in total) and snacks of karaage chicken, and edamame green beans. Admittedly there is more giggling than screaming going on, but we still leave fairly quickly as Fanfan felt “weird and uncomfortable”. Plus there were no Totoros. 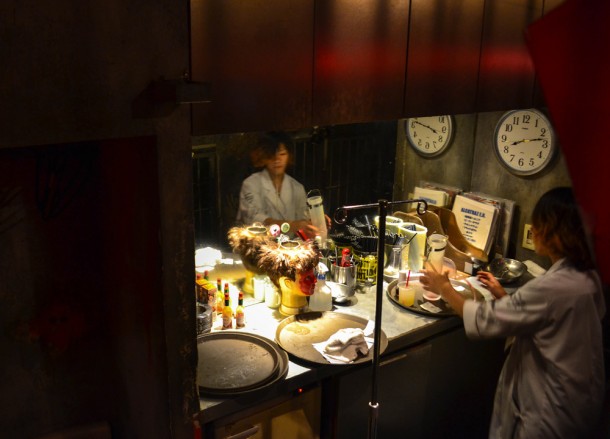 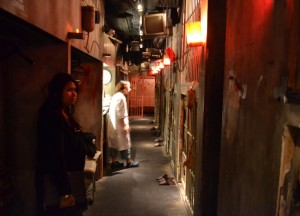 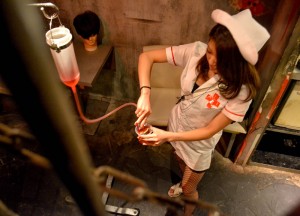 This was 110% Fanfan’s choice and I really don’t know why I’m including it. The chances of anyone reading this, being the slightest bit interested in the Pom Pom Purin Cafe, are next to none. For those who are, it is on the main Harajuku street, and expect to wait thirty minutes, maybe an hour, after getting an advance ticket, before you can queue to be seated at a table. So when we arrive we were given a ticket with a time slot to return, and are forced to wait a further thirty minutes outside, until we are seated. Meanwhile, to add to the pain, I find myself subjected to obscene amounts of ‘kawaii’ through the wait with sugarry harajuku crepes and humiliation at purikura photo-booth. When we are finally allowed to sit it feels like walking into a doll’s house, where the only clientele would be best described as uber-cute. I am the only male in the restaurant, obviously, while the rest are precious cute doll girls. I tiptoe carefully to my table, almost expecting to trip up, and break some of them. I now know how Godzilla must have felt. Meals start at around 1,000 Yen. I go with the beef stroganoff and Fanfan goes with the Mexican taco meal. “Godzilla still hungry”. I still have no idea who Pompompurin is. 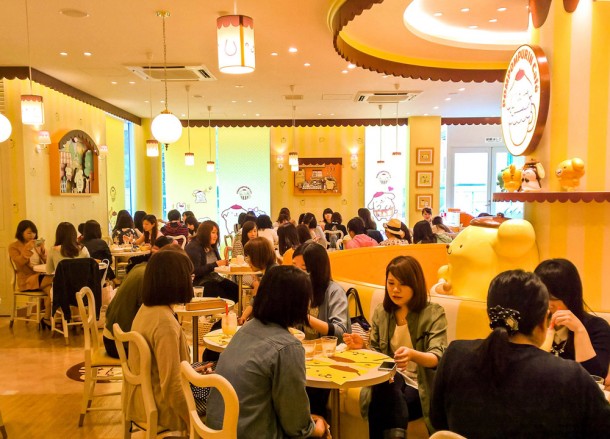 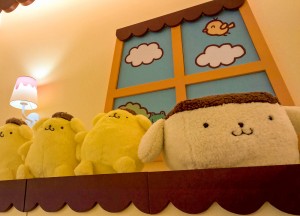 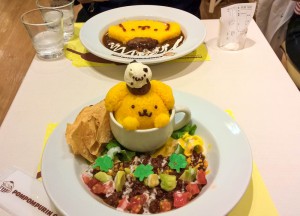 Quite possibly the first restaurant I’ve been to where I never actually ate anything. But the Tokyo robot restaurant in Shinjuku is quite possibly the most marvelous show in the world, and only in Tokyo would you find something like this. Because who else would dare? So I suspect this show was originally geared toward Tokyo’s nerds, the Otaku, where there’s loads of nerd fetishes; from scantily clad cosplay girls, to anime and gaming references. At times it feels like a mix of Beat ’em Up fighter games and Final Fantasy RPG combat scenes, with epic battles summoning gods and beasts to take down the armies of machines. Then throw in a panda riding a cow for good measure. Fanfan, as expected, follows along to the Tokyo Robot Restaurant begrudging and cynical. “Stupid robots”. Yet she ends up grinning like a joyful Totoro the entire of the show. It no doubt entertains a wider audience with its sheer outlandishness and fun of it all. It’s actually extremely hard to describe in writing so watch the video below to get a better idea. Apparently the money spent on this was close to 10 billion yen which makes me wonder how many times the creators sat down, around a table, and asked themselves “what the **** are we doing”. On leaving expect the overzealous tourists talking loudly “what just happened?” “did I really just see that?” “I must be dreaming”, “pinch me”… Anyway, if you have time for just one of these themed cafes and restaurants in Tokyo, the Robot restaurant would be it. Buy tickets in advance at around 6,000 Yen. 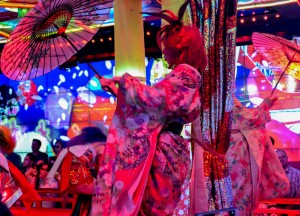 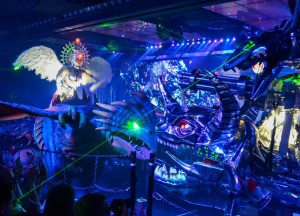 I guess this would be “Brewery Themed” just to fit this post. We actually meant for the Pokémon Cafe in Shibuya, found earlier on the same street, but, after circling the block, and harassing locals, we find that the Pokemon Cafe is now permanently closed. This didn’t go well with Fanfan and I am forced to the Kirin Ichiban Beer Garden alone while she goes shopping. So I go poking around at the barrier of the beer garden, looking for the front entrance, only to find myself trapped in a circular room as the doors close behind me. I stand with eight randomers, around a circular bar, as we watch a bar cheer girl conduct a presentation on ‘worts’. I have no idea what’s going on. The presentation is of course in Japanese and no-one acknowledges me whatsoever, which makes my awkwardness easier. After five minutes or so, of pretending I’m invisible, we get to sample two of what I am guessing are ‘worts’ before the next door opens on the opposite side and we are ushered through to the next area. This is where I finally find the beer counter. I buy a beer, ignore the overpriced food, then scramble to safety with a seat on the far edge of the tables. The beer is fairly expensive at 700 Yen per pint (I could get three Chu-His from the Kombini for similar) so I only drink one, slowly, as I wait for Fanfan to come pick me up. While it is expensive, it’s also in a prime people watching spot on a Shibuya street corner. 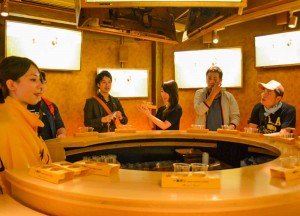 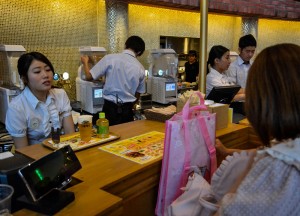 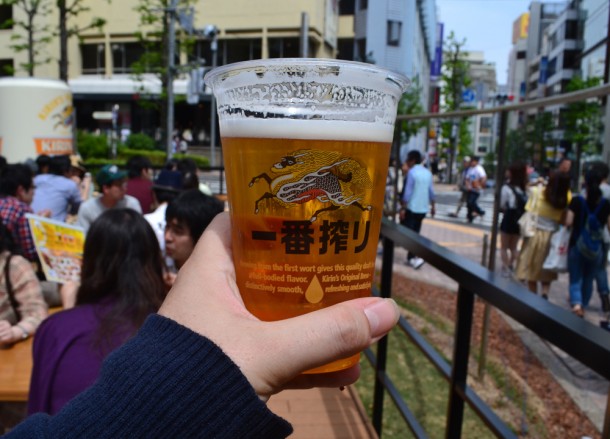