Mark Wiens is my nemesis. Every time I find something to write about he already has it covered. When I turn to research on Google there he is. Personal blogs, CNN articles and a never-ending reel of Youtube videos. I see him so often I feel like his stalker. “Boat Noodle Alley”… there’s Mark slurping away. I don’t think any blog has (or will) cover Thai food as extensively as Mark’s. First with his site eatingthaifood.com and now with his monster blog migrationology.com. It really is impressive. All from a genuine guy with true passion and enthusiasm for what he eats. These days with easy monetizing of blogs this passion is hard to find – or at least incentive hard to distinguish. But Mark Wiens has been there from the start before people dreamed of blogging for profit. He was a pioneer of the blogging boom and continues to hold an admirable and ethical stance on the monetization of blogs. While he is my nemesis he is of course an inspiration. As we are both avid eaters, living in Bangkok, stuffing our faces for a living – it was inevitable our paths would cross at some point. This happened earlier in the week at the launch of Asia Eater Magazine. I pounce on him as he nibbles canapes at David Thompson’s Nahm restaurant in Bangkok. Of course I pester him for an interview and here it is. 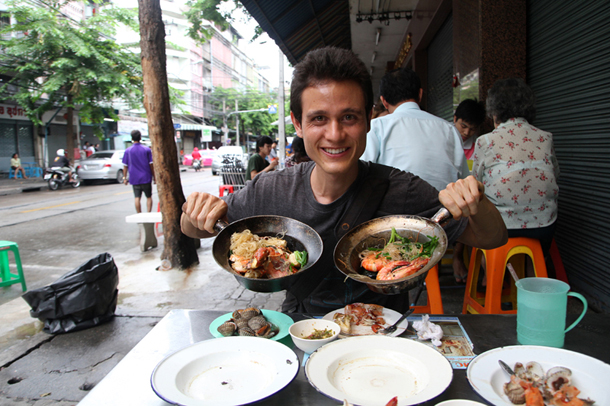 Congratulations on your recent marriage in Thailand. Having myself just married I fully understand how life and priorities can change on the commitment. Does this mean you will be settling in Thailand? Or will migrationology continue to migrate?

Thanks for the great introduction Allan, and it was nice to finally meet you as well. I’m so excited to be married, and part of the reason is that it means that I don’t have to say goodbye to my wife (previous girlfriend), but I’m taking her with me everywhere I go. We work together, so she’s my wife and partner in travel. Thailand will be our base, but we’ll continue to travel extensively at least for the next few years.

The second love in your life is Durian the stinky fruit of Southeast Asia and I also believe you have a fondness for stink beans. I can’t imagine the smell of your kitchen. How does this affect your home life? Have you any stories of being ostracized or kicked off public transport?

The great thing about having a Thai wife is (well, at least in my case) that she allows me to eat all of my favorite foods: raw garlic, raw onions, stink beans, and durian! Haha, I’ve pulled a couple successful BTS durian smuggles, but I normally will hop on a window bus if I have a real stinky one. Haven’t been kicked out or fined yet! 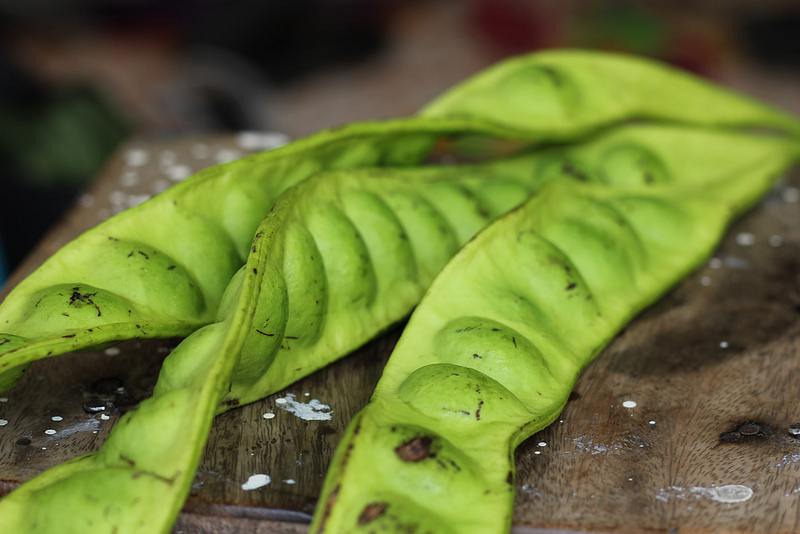 One of my personal vices when travelling is local liquors. If you had to choose a tipple what would it be?

Hmm, I’m no expert when it comes to liquors, but having spent time on the Kenyan coast I would occasionally have a cocktail they called the “snake bite,” or dawa cocktail. It’s a simple combo of crushed ice, fresh lime juice and pulp, honey, vodka, and sometimes a little ginger.

One of your recent travels took in an extensive journey through India with an impressive study of Indian food. Have you planned the next country / region to get your teeth into?

That trip was fascinating, so much to discover in India and Nepal. Next we are on our way to Tanzania and then Ethiopia. I’ve been to Tanzania before but this will be my first time to Ethiopia, and I’ve been a devout connoisseur of Ethiopian cuisine since I was a child, so I’m extremely excited. 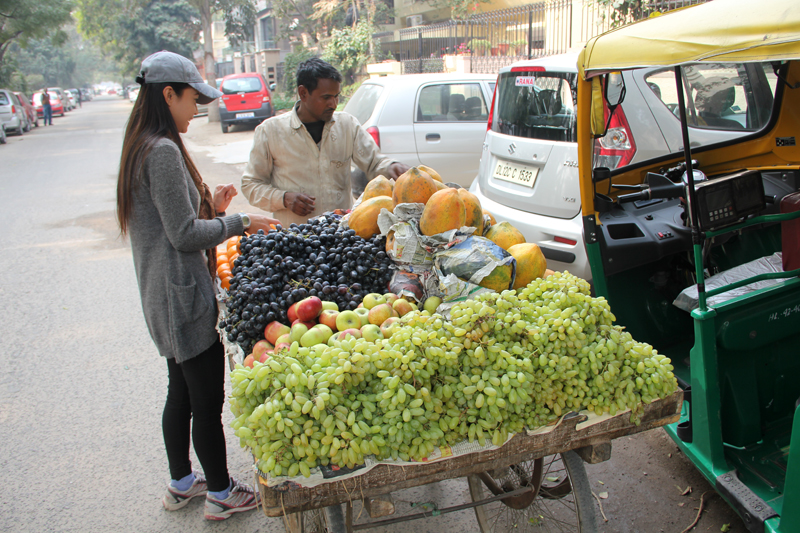 I understand your grandfather was a Chinese chef? Have the culinary skills passed through the generations or do you prefer to hit the streets to eat?

I do enjoy cooking when I have an opportunity, but I lived in a studio apartment with no kitchen for so many years (before getting married) that I got in the habit of not cooking. Now that I am married, my wife and her mother cook so incredibly well, I barely touch the wok! However, I would love to cook more and develop some recipes in the future. I like to cook anything Asian, especially Sichuan style Chinese dishes.

I often dream of evening Beer, Roti Prata and Mutton Curry on a Geylang street corner in Singapore. What would be your dream food scenario? What? Where? When?

Wow, that’s a packed question! There are many, so I’m just going to share the first scenario that comes to mind. My Mom is from Hawaii, so I’ve spent quite  a lot of time there. One of my favorite food scenarios is a local Hawaii style beachside picnic feast. Rice balls coated in seaweed, spam musubi, grilled teriyaki chicken, garlic fried chicken, Chinese barbecue ribs, raw marinated fish (called poke in Hawaii), seaweed salad, and fried chowmein noodles, are a few of the dishes that would be included. 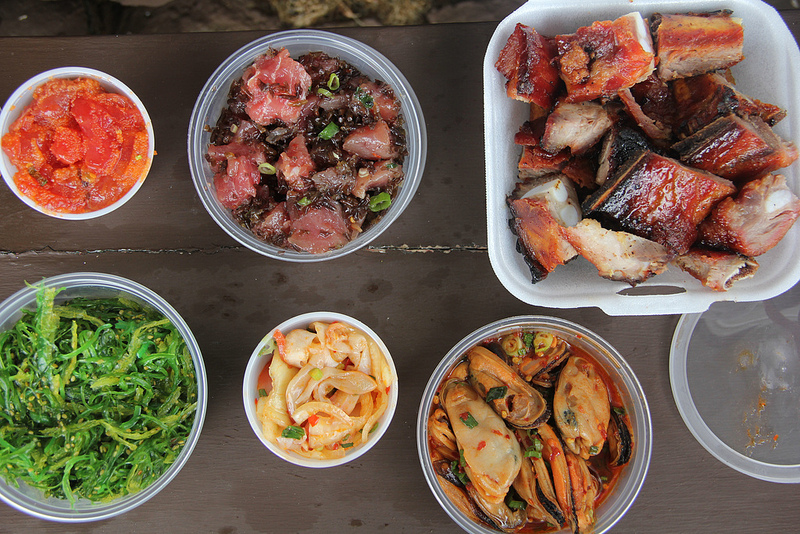 You and your partner in crime at eatingthaifood (Bangkok Fatty) have to be the skinniest fatties I’ve come across. Should we trust you? And if so what’s your secret??

Dwight and I were feasting and taking photos long before we started a dedicated Thai food blog. All of a sudden we both realized we had multiple hard drives full of Thai food photos, and there was no solution for what to do than to start a blog, that’s in short how it began. We’re normal guys with appetites for delicious food and we both find ultimate pleasure in eating. So I hope you trust our lust for food! As for myself, I’m not a big fan of sweets, so I usually steer clear of sweets, and I also try to avoid packaged or processed snacks. Secret – Avoid packaged and processed food (like MaMa, though my wife and just about all other Thais I know love it), and eat the good freshly cooked food! 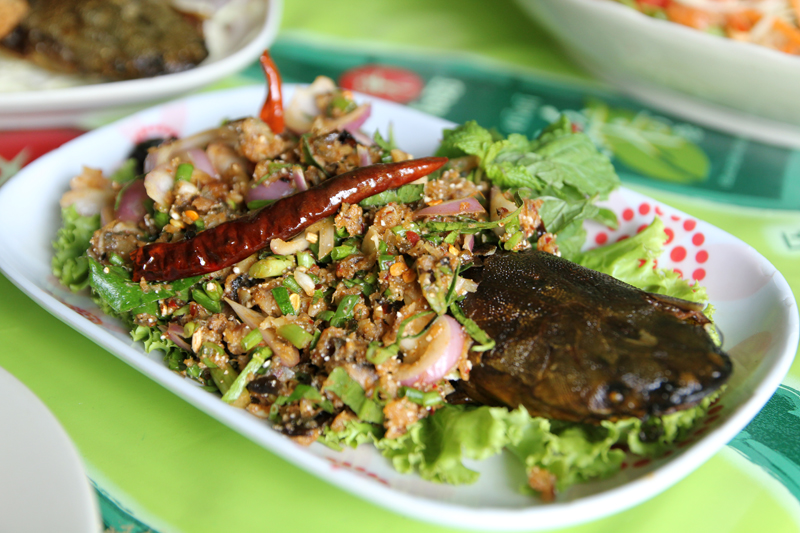 Would you ever consider veganism?

While I have absolutely nothing against eating vegan occasionally, I simply enjoy eating animals: meat tastes awesome. So no, I probably would never consider being vegan. That being said, I do try to eat red meats in moderation and cutback on deep fried foods.

Thank you very much for having me Allan!

Thanks so much for the interview and best of luck with your new life and challenges. Until our paths cross again at a random Bangkok food stall. For more on Mark Wiens check out migrationology.com. Probably the best food blog in the world.