In 2017 we travelled from Honshu to the Sapporo Snow Festival by rail (JR Pass) crossing the Seikan Tunnel on our journey between Tokyo (Honshu) and Sapporo (Hokkaido). We then spent no more than 48 hours in total in Hokkaido, with less than 24 hours in Sapporo and the surrounding area. Yet I feel that we still covered the Sapporo Snow Festival sufficiently, or at least I have no real urge or reason to return. And while we did miss the Tsudome site (Sapporo Community Dome), simply because we had little interest in it, we otherwise spared a few hours for travel to Otaru for the Snow Light Festival. And we really weren’t rushed either, where instead of using local metro lines, we would walk to and from the sites from the main JR stations. But I guess how long you spend at the Sapporo Snow Festival depends on personal interests, and expectations, as it was pretty much just sightseeing for us. And 24 hours offers more than enough time for sightseeing.

We actually never expected to find tickets for the trains from Honshu to Hokkaido when we first arrived in Japan, so it felt almost like a miracle when we found tickets, as well as an almost empty train when travelling (our carriage below left). Because people apparently prefer to fly this route, given trains are expensive, which is otherwise irrelevant when travelling on the JR Pass given every JR journey is covered at no extra charge on the pass. So the train is rarely fully booked along this line, but do not take this as a guarantee, and always book in advance. However it is a rather lengthy route, being around 6-7 hours between Tokyo and Hokkaido, meaning it may be best to split the journey into two parts. And we did this with an overnight stop at the first port city of Hakodate (4 hours out from Sapporo), before travelling to Sapporo the following morning at around 11:00AM. We then based ourselves near Chitose Station, due to the steep hotel prices in Sapporo during the festival, which is only 30 minutes out on the JR lines. Meaning the entire journey was covered on the JR Pass. (Here for our rail travel guide between Honshu and Sapporo). 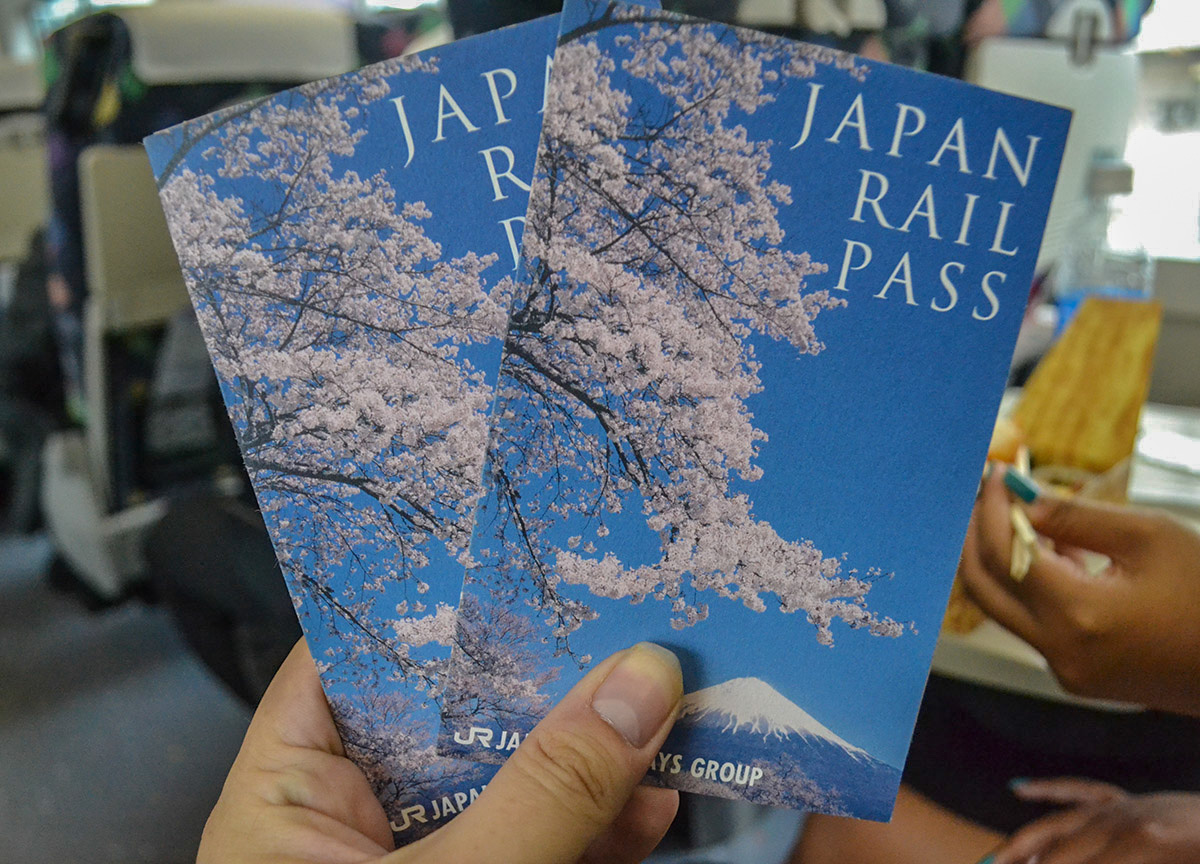 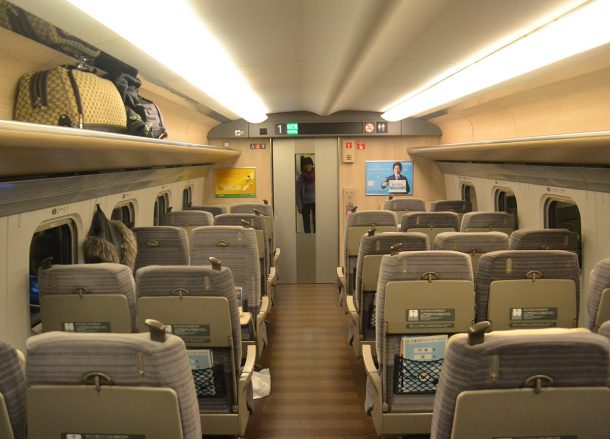 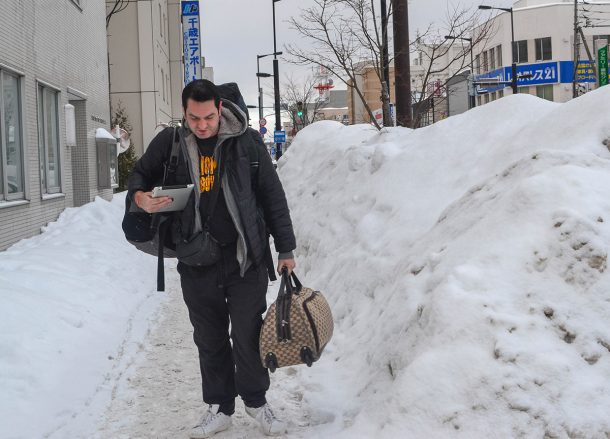 The main site of the Snow Festival is found at Odori Park (Ōdōri Station), just one short subway stop from Sapporo station, which is easily reached on foot (as we did). And the site itself is like one full loop around Odori Park, through varying sections of the event, and follows paths on either side, which are covered in about half a foot of compressed ice, so it’s best to be careful. Along the way we passed food stalls, and heated tents to escape the weather, but we really had no time for either. Otherwise, there are lots of ice sculptures, as expected, around 300 plus, and the highlights had to be the light-and-sound shows, including otaku (nerd) favourites like Final Fantasy VII, and Star Wars. Some of the larger sculptures then included (in 2017) the likes of Kofukuji Temple of Nara, the Arc de Triomphe of Paris, and a Giant ‘Cup Noodle’, obviously. Then there’s just seemingly countless smaller sculptures dotted throughout. So each year the themes would follow trends and phenomenons of the past year, in anime and pop culture for most of it, so it was the likes of Pokemon Go, PPAP on our visit, along with global figures, like Trump. (this is all best seen in the video at the top). So we probably covered the entire park in an hour or so, before following the same route back to grab our bags at the station lockers, as we forwarded to our hotel in Chitose for the night. 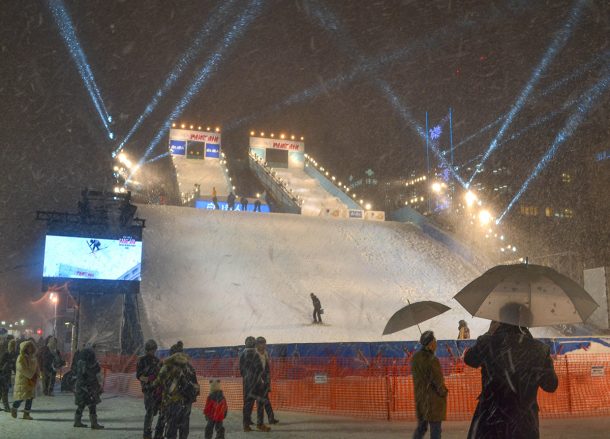 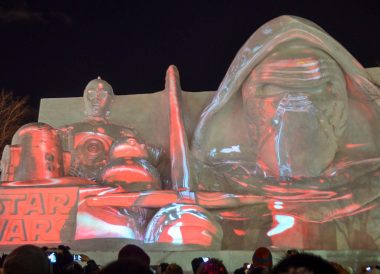 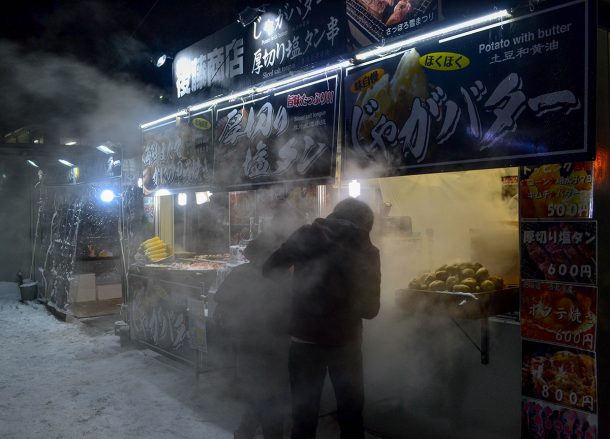 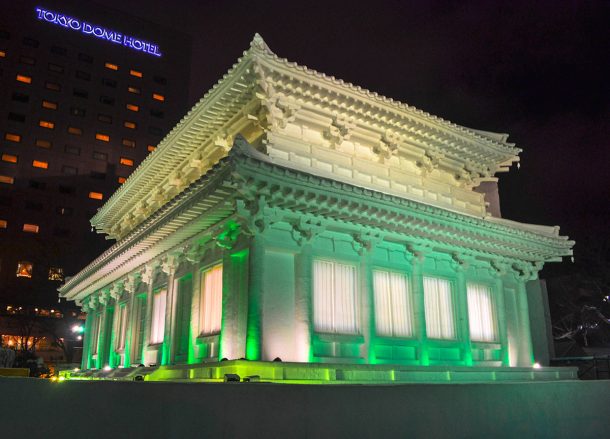 We actually started out at the Sapporo TV Tower, found at the east end of Odori Park, and is really just hard to miss. So after waiting forty minutes or so in line at the Sapporo TV Tower (which opens daily, between 08:30 – 22:30, and costs 720 Yen) the elevator takes us to the top of the tower. But there really is not much excitement other than the views from the observatory deck, as expected I guess, although they really are some fantastic views. So it was definitely worth the wait. Otherwise we are back down relatively quickly, to finally explore the park. And this side (the east side) would be better the start for events and entertainment at the festival, where nearby attractions include the ‘Outdoor Ice Skating’, as well as the ‘Park Air Jumping Platform’ which is literally a snowboarding slope where snowboarders and freestyle skiers take part in competitions (although we missed the events). But I would recommend starting out at this side of the park, before following a loop round on the right path, as the entrances to the sound-and-light shows are mostly on this side. 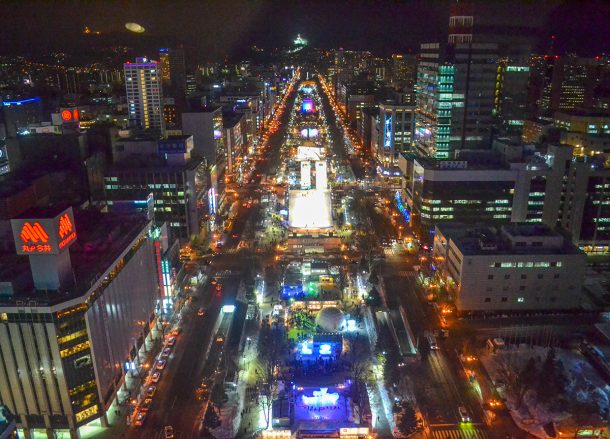 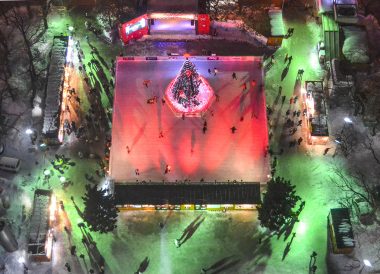 The next morning we returned again to Sapporo, and stuffed our bags into lockers at Sapporo Station, before squeezing in a near full morning at the festival. But this time we started out at the second ‘Susukino’ site, which is found at a crossing junction of the Susukino area, which is better known locally as a red light district in Sapporo. Walking is again possible from the main station, but probably not advised, as it’s otherwise just a couple of stops down on the subway to Susukino Station. So “Susukino Ice World 2017” is literally just a road where the central islands have been decorated with rather impressive ice carvings, where taxis and traffic continue to pass through on both sides. Yet it is relatively easy to walk between the islands, and to take photographs next to a handful of the sculptures, although it really is not the best place to have a tourist attraction. Otherwise, there’s not a lot more to do at the Susikino site, so we decided on a return visit to the main site of Odori Park, which is found along the same route back to Sapporo station. It’s probably a 5-minute walk between them. So again we completed a full circle of the Odori site, in the morning time, before leaving the festival behind, on the rail lines bound for Tokyo. 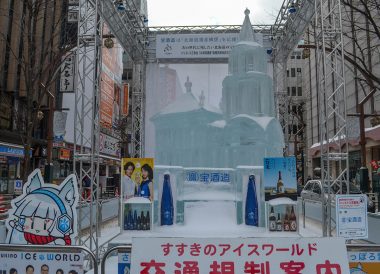 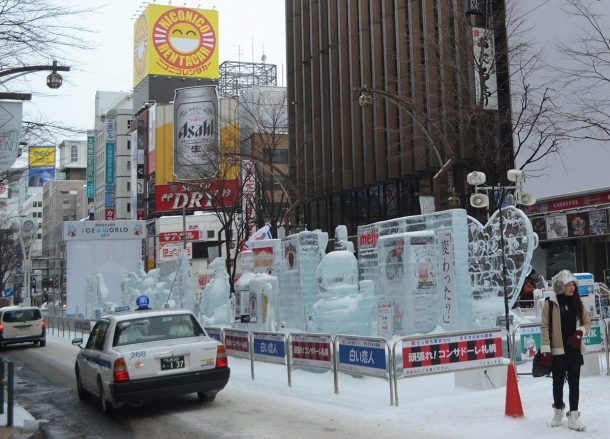 However we did bypass Sapporo and the Snow Festival to begin with, when we instead stuffed our bags into lockers at Sapporo Station, and boarded the next train to Otaru. And this is a port city found northwest of Sapporo in Hokkaido, which is famous for hosting the annual “Otaru Snow Light Path Festival”. So this event takes place in the evening hours between 17:00PM and 21:00PM, when it coincides with the Sapporo Snow Festival through 1o days in February. Although dates vary each year. But this was because of timing, more than anything, as we arrived in Otaru shortly after 16:00PM, and just in time for sunset, and the lighting of the lanterns along the Otaru Canal. Before the skies turned dark. So, with only one evening in this region of Hokkaido, we made the most of the only opportunity of seeing it. As the events at the Sapporo Snow Festival had no real urgency otherwise, and we still had a full night and morning to explore the Sapporo sites (Our Otaru Light Festival Guide here).

The Stopover in Hakodate

The stopover at Hakodate was well worthwhile, and of course we spared some time in the morning to cover the main tourist attractions of the city. Here we started out at the Hakodate Asaichi, or ‘Morning Market’, which is conveniently located next to the main train station, as well as the tram lines. We then jumped onto the trams, which are an attraction in themselves, to go and explore Goryōkaku Park, a ‘star’ fort shaped to allow for more guns turrets and less blind spots on the fortress walls. Which you can see from above at Goryōkaku Tower (opens 09:00AM) where a quick elevator takes you to the observation deck (840 Yen) standing 107 meters above the fortress grounds. From the observatory deck we also have panoramic views over Hakodate itself, and further to the surrounding mountains, and apparently you can sometimes see across to Honshu Island and the mainland on a good day. But we only had around 4 hours in Hakodate, before we forwarded on to the Sapporo Snow Festival. (Here for our guide to a stopover in Hakodate). 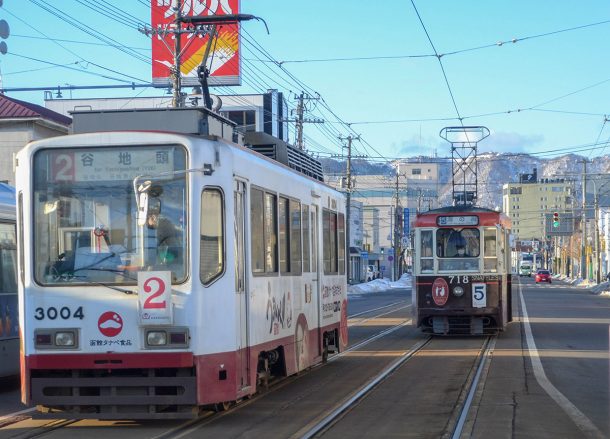 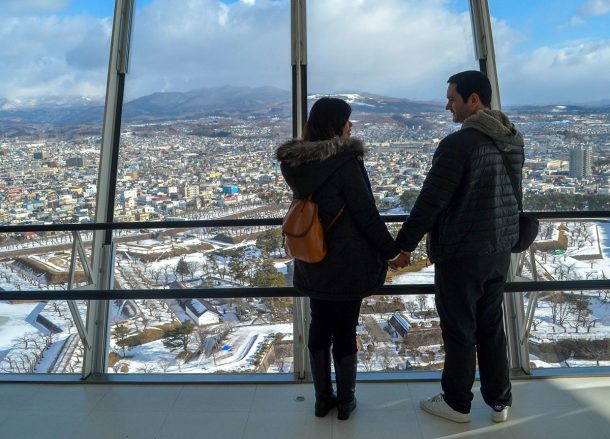 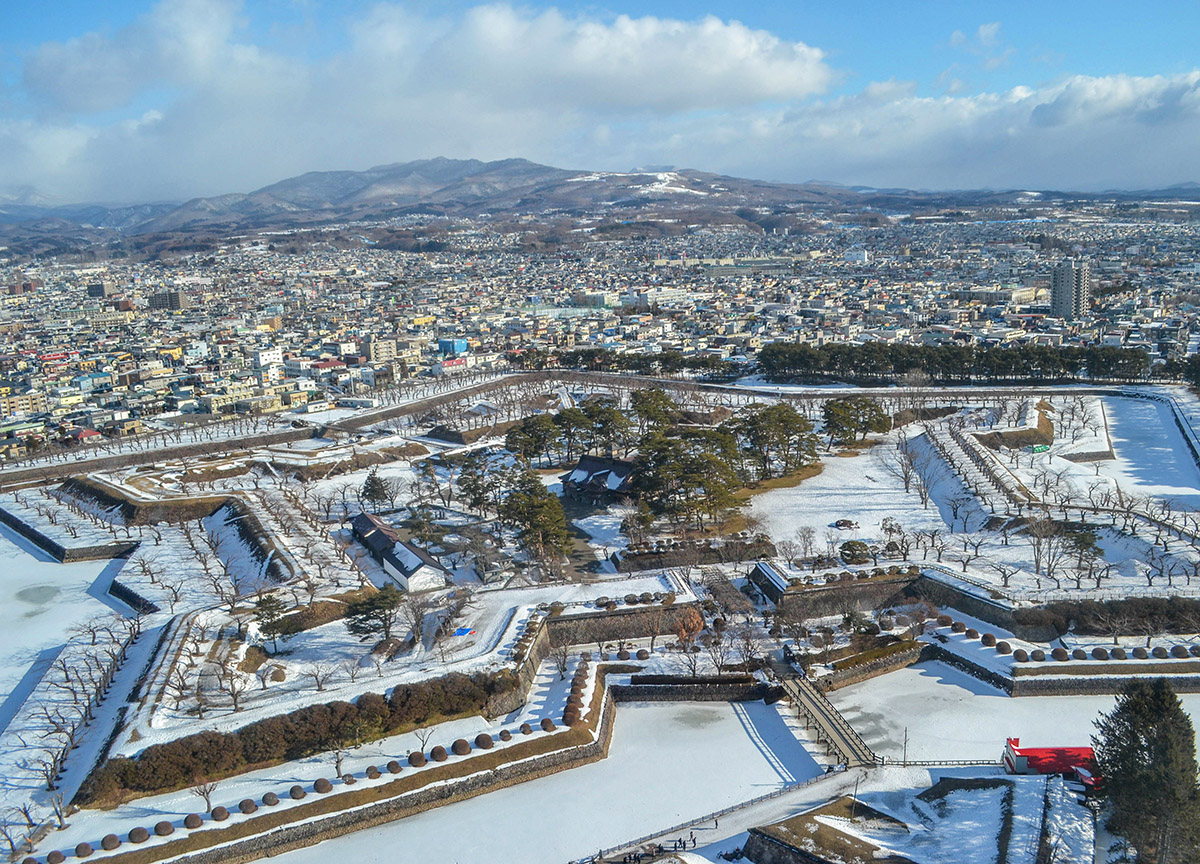