Sacred threads, or “Sai Sin” as they’re known in Thai, are probably best known for their use as string bracelets occasionally picked up by tourists and travellers on their travels. But these meager cuts of string bracelet often come from a much longer string that has been blessed by monks in Buddhist ritual. I come across these rituals umpteen times throughout the book, so much that they’re not really mentioned for most. The most extravagant example would be during Songkran when we are part of a ceremony at ‘the big temple’. When we arrive we find that threads have been strung through the rafters of the temple to connect the congregation with the monks at the front. There’s a kind of grid made above the congregation and pieces of string dangle down to those in the congregation. The congregation then tie these strings to heads or wrists or anywhere really, and connects and channels the good karma from prayer to everyone in the temple. When the ceremony ends the congregation will take apart the grid of string and pocket it for later when they will likely use them to make shorter lengths for string bracelets. 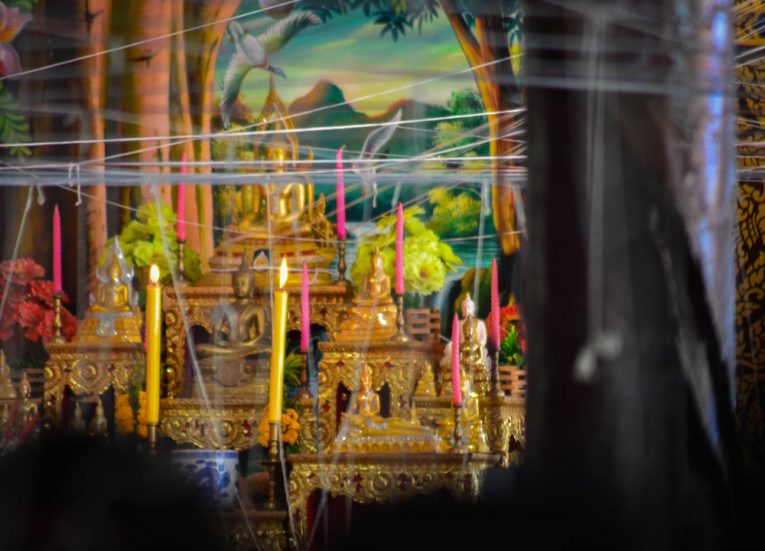 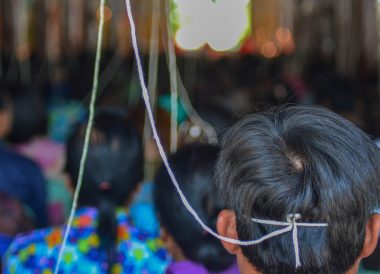 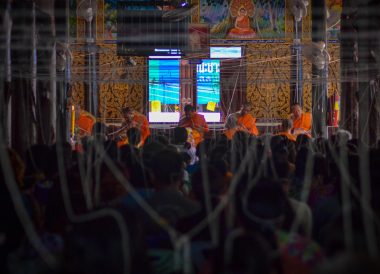 To give a more intimate example, my first ever visit to Broken Road was for a Monk Blessing Ceremony (Tor Ar Yu) to give health and prolonged life to grandpa Ta. Through the ceremony a length of cotton thread is held by nine monks in the front room of the house which, again, connects to the members of the congregation via ceremonial candles, a Buddhist altar and a golden bowl filled with water. The prayers and ceremony last roughly thirty minutes as the candle wax drips into the now Holy Water. The monks then present the elders of the house with the blessed string and splash them with holy water using a brush made from bamboo. The sacred thread, and bowl of Holy Water is then left with the family as the monks leave. Ta then sits, legs crossed, and with palms held tight in prayer, as the elders of the congregation cut lengths of string bracelets to tie to his wrists. Before tying the bracelets the thread is first rubbed up the arm while reciting words of good luck and fortune to Ta. “Stay well, drink your milk, eat your greens”. The same goes the opposite, rubbing the string down the arm, while asking for bad feelings to go way. The string bracelets are then tied to his wrist, then the next person is up. 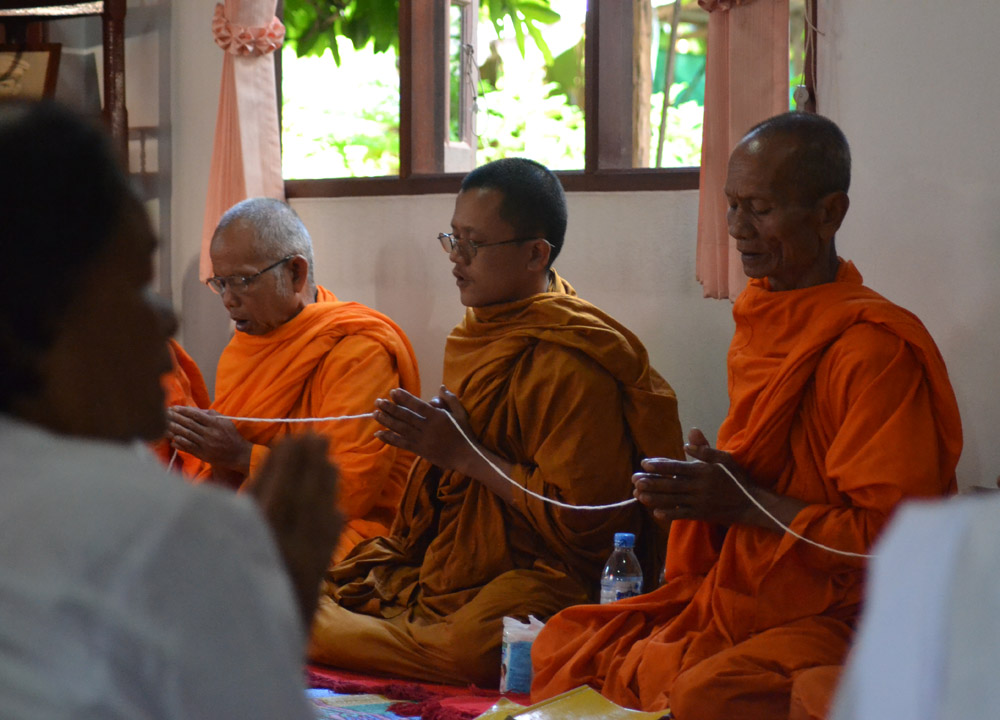 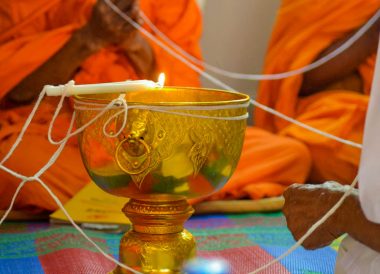 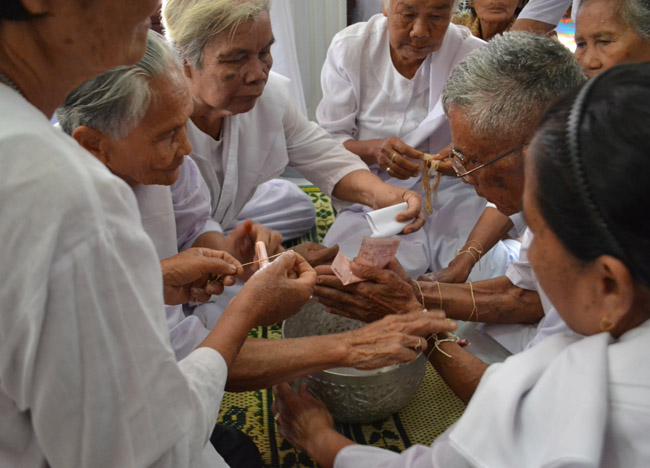 Since this time, roughly three years ago, I have had at least one or more string bracelets on my wrists. As I type this from the UK, I am now wearing a basic white string bracelet on my left wrist, an orange string on my right, and a pendant necklace round my neck. Ta presented me the latter on the morning we flew to Taipei just in time for Typhoon Soudelor (it’s all in the book). The orange bracelet has been on my wrist since the day of Ta’s blessing. We actually dropped a slight bombshell the previous night telling the family that we married in Bali, where most of them didn’t know I existed. After a slight kerfuffle the family all came together to each bless us and welcome me to the family. This was quite a significant ceremony and money notes are included under the bracelets to wish us wealth and prosperity in our future. Fanfan also gets a blessed gold bracelet from Meh who is surprisingly well prepared. Each family member will also sprinkle the bracelets, our bodies and heads with the blessed water from the earlier, this time using a branch from a gooseberry tree. Anyway, I still have the orange bracelet from this time, which was presented by Ta, and the family do think it’s a bit odd. Most people don’t wear them long, a hygiene thing maybe as they do get tatty over time, and people will normally discard of the basic string bracelets  after a day or two. They will do this by untying them where breaking or cutting them remove the good fortune and blessing of the bracelets. 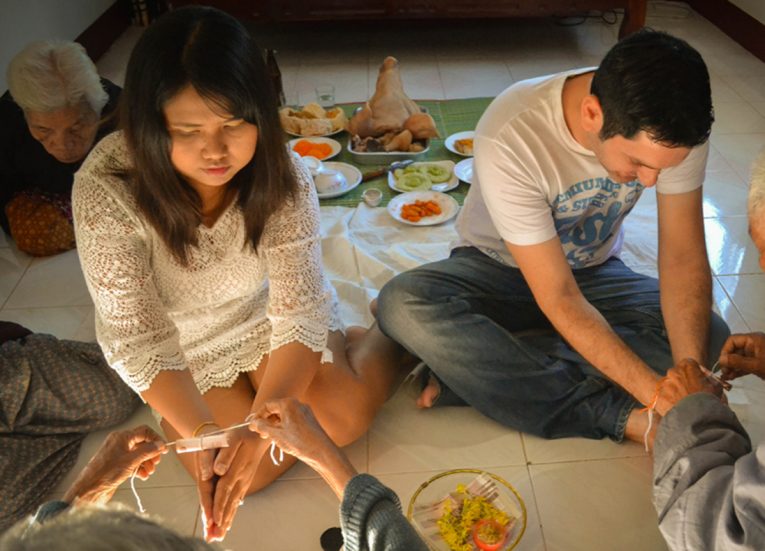 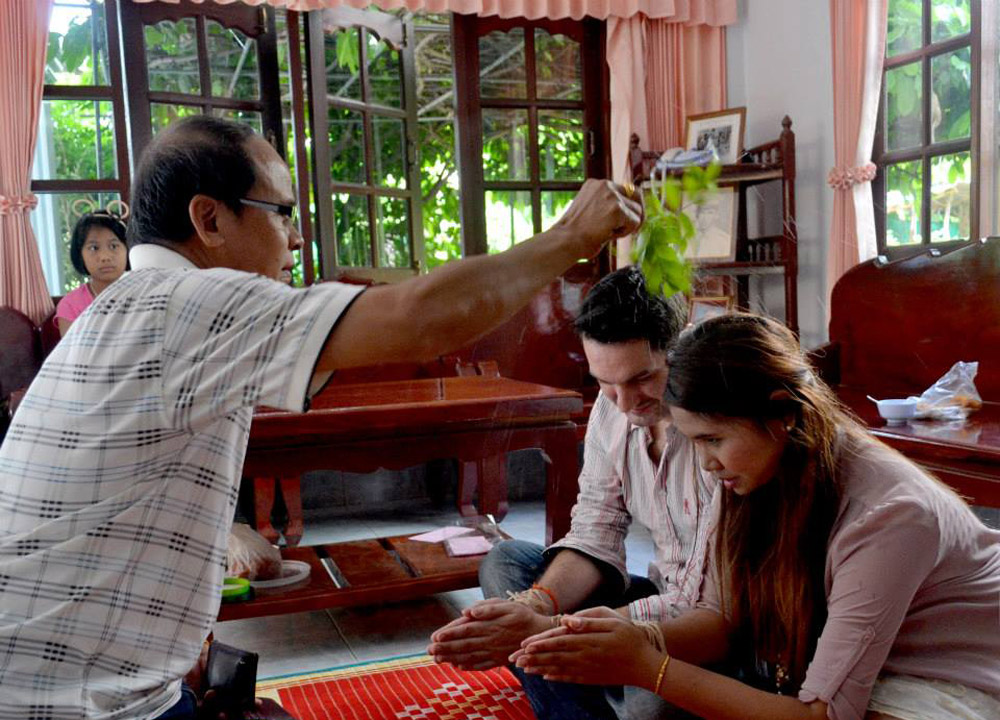 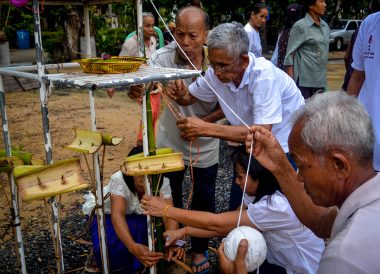