For independent travel from Taipei to Jiufen, it’s best to first travel from Taipei to Ruifang, the district where Jiufen Village is found, before taking the bus to Jiufen from Ruifang Station. A journey which takes around 1hrs 30mins in total with a couple of fiddly bits in between. Which I will share through this post that shows how to go to Jiufen from Taipei. Most people will also be travelling from Taipei Main Station to Jiufen, however we started out from Ximending (Ximen Station), which means taking just a quick trip on the metro to begin again at Taipei Main Station. 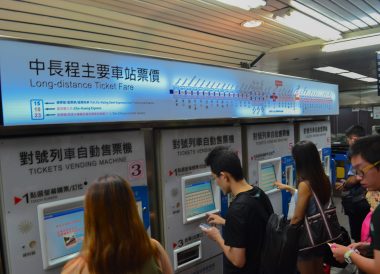 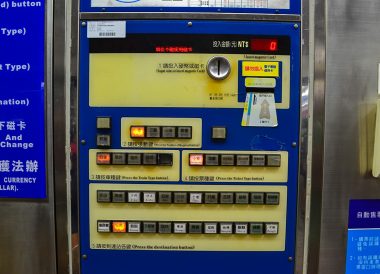 Taipei to Ruifang by Train

At Taipei Main Station, look for the ticket machines for ‘Long-Distance Ticket Fare’ (above left) which gives the express travel options for Ruifang. And this is the better/faster option with various express trains (e.g. Puyuma) taking around 30 minutes from Taipei to Ruifang. And costing around NT$50 for a one-way ticket, per person. But there is also the local train option (above right) where trains leave Taipei to Ruifang every hour or so, although the local trains take around 50 minutes with stops along the way (20 minutes longer than express trains). For local trains, the tickets are priced at around NT$50 per person. Either way, the trains are comfortable, and I’d really just go by the earliest arrival time at Ruifang Station. Timetables found here. 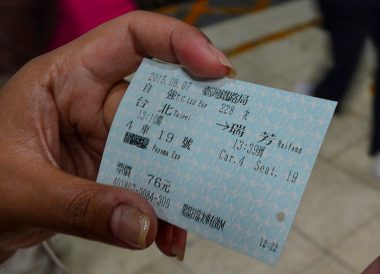 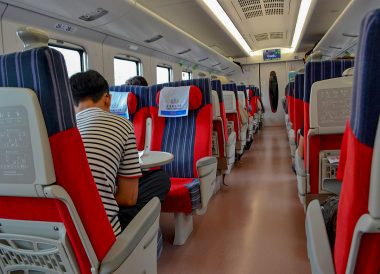 Ruifang to Jiufen by Bus

There will be signposts at Ruifang Train Station (in English) showing to EXIT WEST to Jiufen. So follow this for the bus leaving from Ruifang to Jiufen. There will also be tourist info available at Ruifang Train Station for onward travel to Jiufen, so it’s best to double check before continuing on to the bus stop. Otherwise, just cross the road and turn left, then continue straight for around 200 meters, until you reach the bus station next to the police department (as in image below). Or, during weekdays, you can take the bus from the nearby “Welcome Supermarket”. Just look for the ‘Golden Fulong Shuttle Bus’ signs at bus stops. Also, it’s easy to find cute yellow taxis at the station, and it costs around NT$180+ for a taxi to Jiufen. 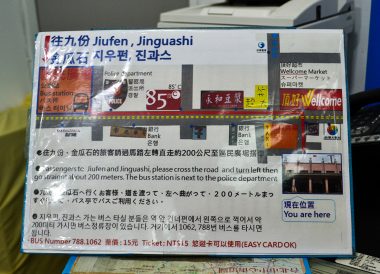 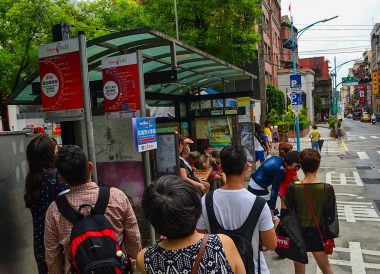 There are a number of options for the return trip to Jiufen, but we opted for the direct bus this time, leaving from the main road passing Jiufen to Taipei. And this takes roughly one hour, with stops near the Metro lines once in Taipei city centre. Otherwise you can follow the same route back to Ruifang Train Station on the Golden Furlong Shuttle Bus, with the last bus leaving at around 18:00PM. Again stopping near to Ruifang Station. Then just take the train from Ruifang to Taipei Main Station again, where trains run regularly through to late at night. And again there’s always the taxi option from Jiufen to Ruifang, which similarly costs around NT$180. Fun Fact: We did this day trip on the same day as Typhoon Soudelor hitting the shores (full story here). 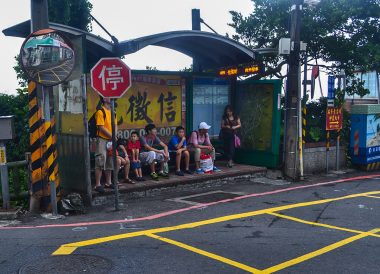 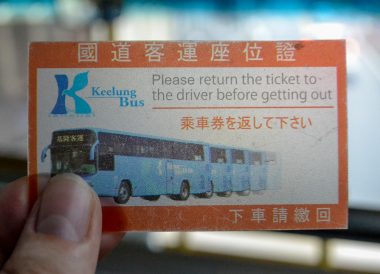