It would always be a toin coss for me between Tokyo and Osaka, where to date I have been to each three or more times, and for us they will both make bases for travel in-and-around the central regions of Japan. Because Osaka is a great base for travel in the Kansai region and beyond, where it connects to the high-speed JR Shinkansen lines, and the top tourist attractions in Osaka can also be covered on the tourist ‘JR Pass’. Although there will also be the option of local and regional tourist passes, which offer unlimited travel on trains and busses in Osaka and beyond. Here’s a decent list of them. So Osaka would undoubtedly be one of my favourite cities in all of Asia, definitely in the Top 3, even though the top tourist attractions in Osaka could easily be covered in just one weekend. Because there are just areas of the cities that I could keep going back to, again and again, as the city is just so fascinating to look at and explore. We have also stayed in Osaka through varying budgets and accommodation, from the top floors of the tallest building in Japan, to the capsule hotels of Osaka’s ‘ghettos’. 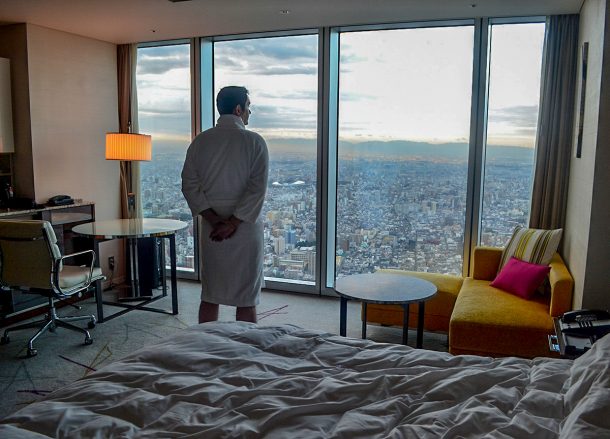 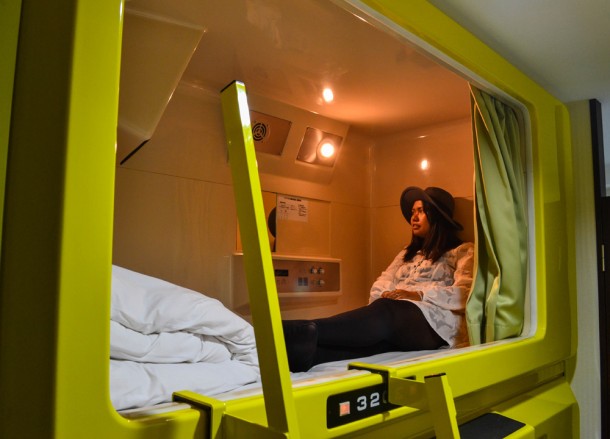 But also there is the food, in which Osaka is somewhat stigmatized for, and there is a saying of “Osaka wa kuidaore” which means Osaka people eat ’til they drop. Which is very understandable, as the city is almost unbeatable as a food city, and it is also birthplace to many of Japan’s more famous cuisine, such as tacoyaki, a hugely popular street food snack, in octopus dough balls with mixed fillings of tentacles, tempura scraps, spring onions and pickled ginger which are found all over the city. Eat when hot, gooey and down right delicious. But the food barely ends there, and throughout Osaka the various cuisines are easily found by giant models and billboards featuring octopus’, pufferfish, gyoza, and my personal favourite, okonomiyaki. So for me the top tourist attractions in Osaka is undoubtedly the food. 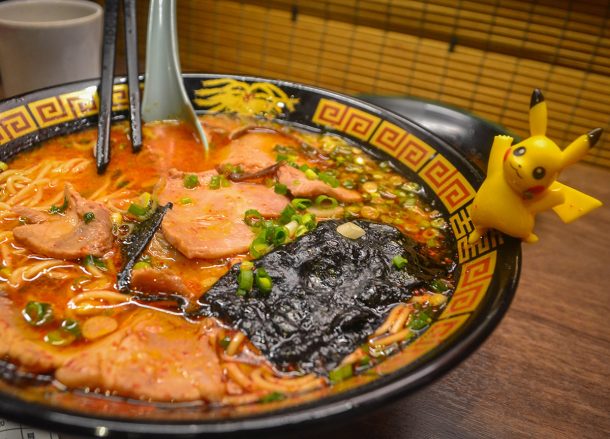 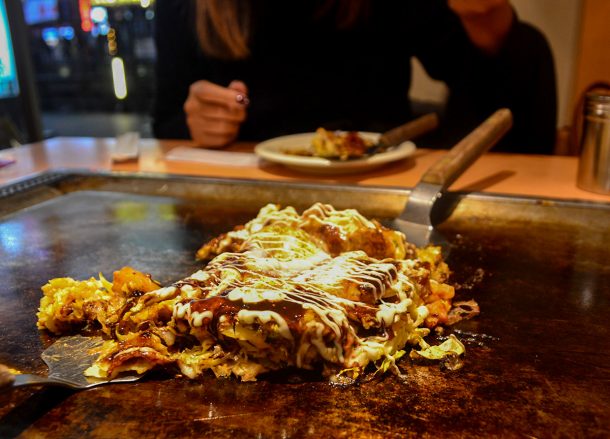 The Dōtonbori Canal area would be the first area to explore for most visitors to Osaka, starting at the famous Glico Man billboard backdrop, found at the Ebisu bridge. And this is found in the downtown Namba district famous for its buzzing arcades, flashing barges, and towering brash neon billboards. But again it is importantly a mecca for eating in the city, and some of the better known restaurants and food chains, can be found along the canalside here. Otherwise the entire area is great to get lost in, where a maze of underground malls and sheltered arcades surround the canal, and the city street life is really quite fascinating. However, it is the most popular of tourist attractions in Osaka, and is about as touristy as it come in Osaka, so it’s also a great place to pick up some ‘Duty Free’ shopping. For travel the nearest station would be Namba where underground plazas connect up to the surrounding arcades. Check here for nearby hotels. 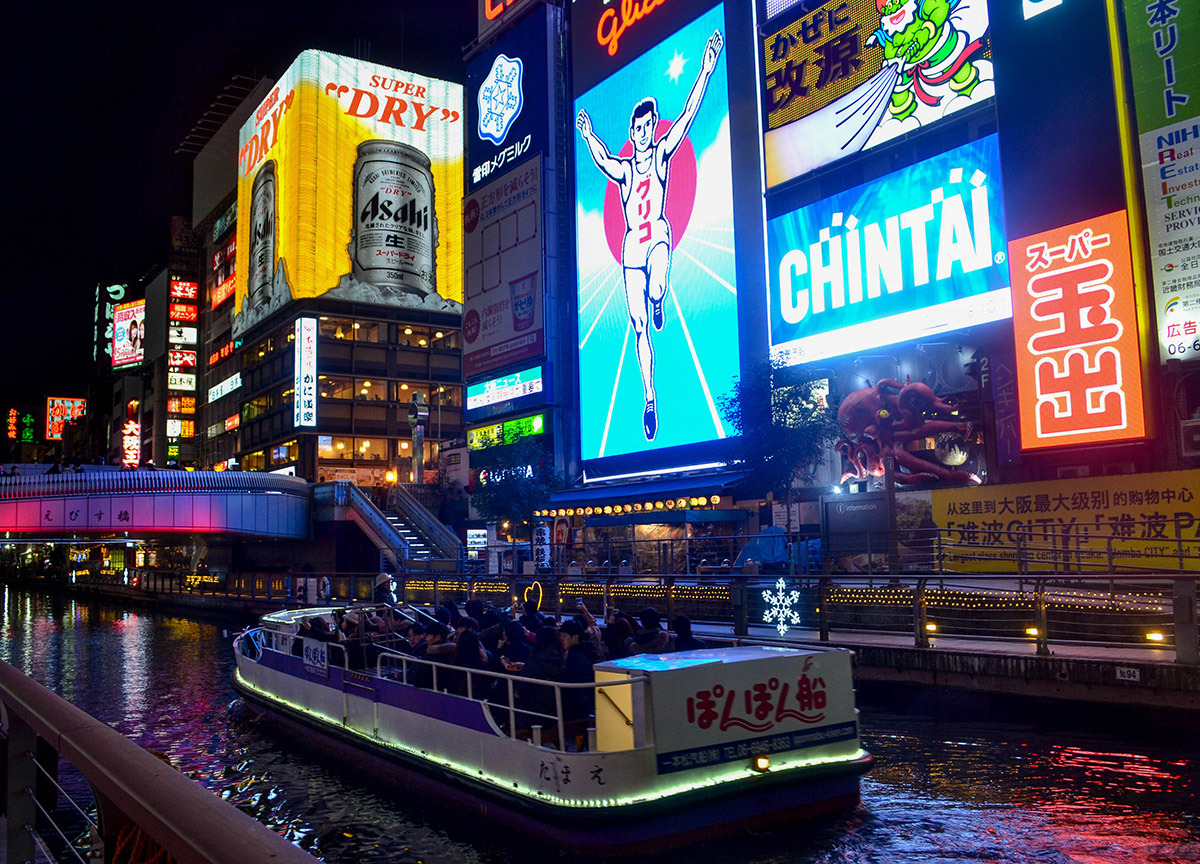 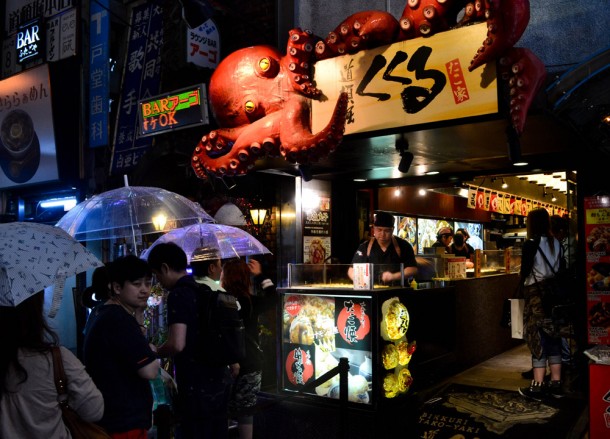 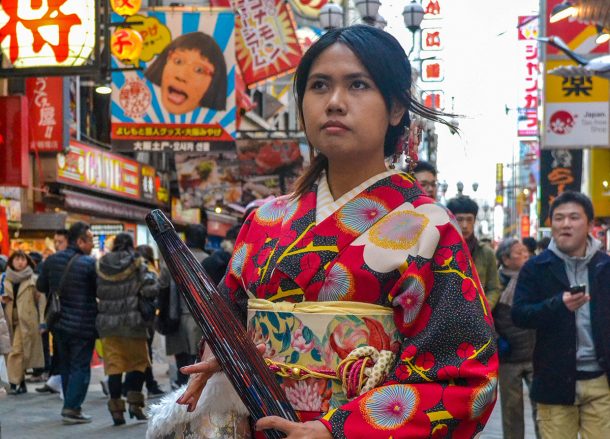 The Shinsekai area offers one of the most visually fascinating street scenes I have ever come across, and I honestly recommend starting in this neighbourhood, before exploring Namba and the Dōtonbori Canal, because it is simply far less touristy. Because Shinsekai does have an old stigma of being one of Japan’s ghettos, and to some extent dangerous, although this really is disputed these days, and moreso when compared to other global cities. Maybe just be aware of pickpockets. But there was a time when Shinsekai was a bustling downtown, with vibrant backstreets, only to be left behind due to lack of redevelopment (mid-1900’s), to become one of Japan’s poorest areas. Otherwise it is just so visually stunning, with lots of cheap restaurants, bars, inns, and local hangouts like cinemas and pachinko parlours, under the presiding backdrop of the iconic Tsutenkaku Tower. And it feels somewhat lost in the past, a retro and kitsch part of the city, and it should soon be one of the main tourist attractions in Osaka. So it’s best to get in early. It can be easily reached by Shin-Imamiya Station. Check here for nearby hotels 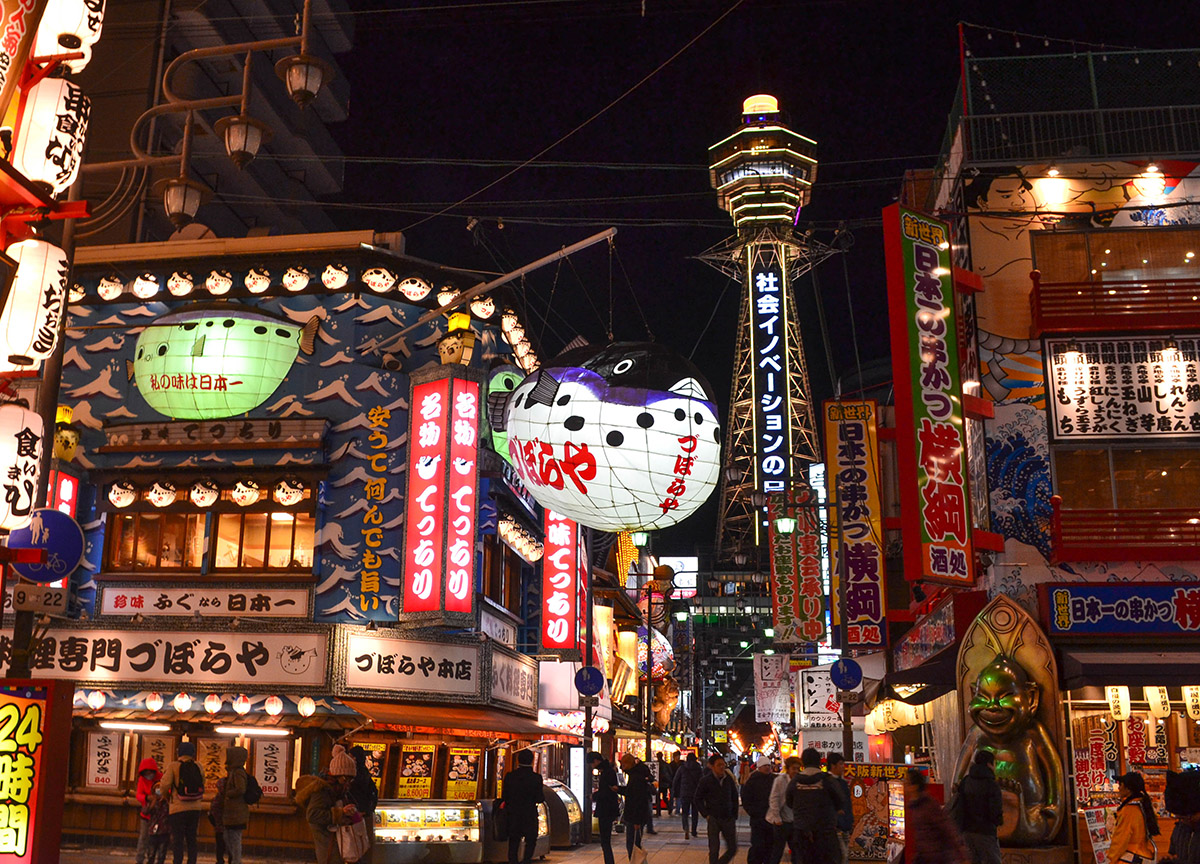 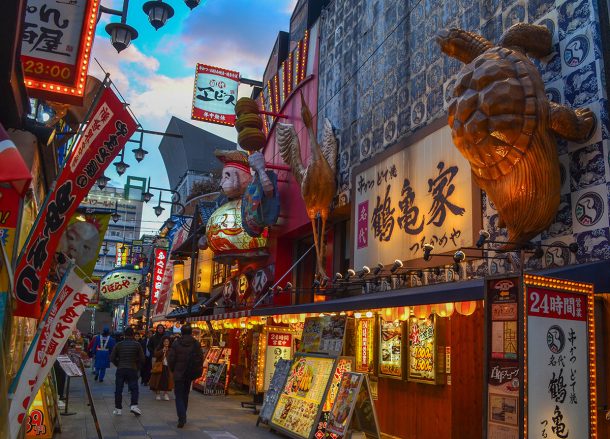 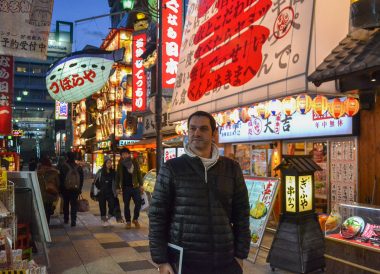 This Harukas 300 Observation Deck is found on the very top tiers of the Abeno Harukas building, which is not only the tallest skyscraper in Osaka, but all of Japan. And arriving it feels almost like a futuristic sci-fi skyport, with views way above the anywhere else in the surrounding city. But on our last visit to Osaka we went one better for this experience, with a stay in the connecting Marriott Miyako Hotel where our 53rd floor guestroom suite shared similar views to the 60th floor observation deck. Which to date has been unmatched for us when it comes to hotel stays. But the hotel stay of course comes with a free ticket to the observation deck, so we get to experience both, and of course the higher tiers share panoramic views over all sides of Osaka city, along with some fascinating sound and light displays. Among other attractions. But it is no doubt the views which cannot be missed when in Osaka, and the Abeno Harukas building is also easily found right on the doorstep of the JR Tennoji Station. Official website here. 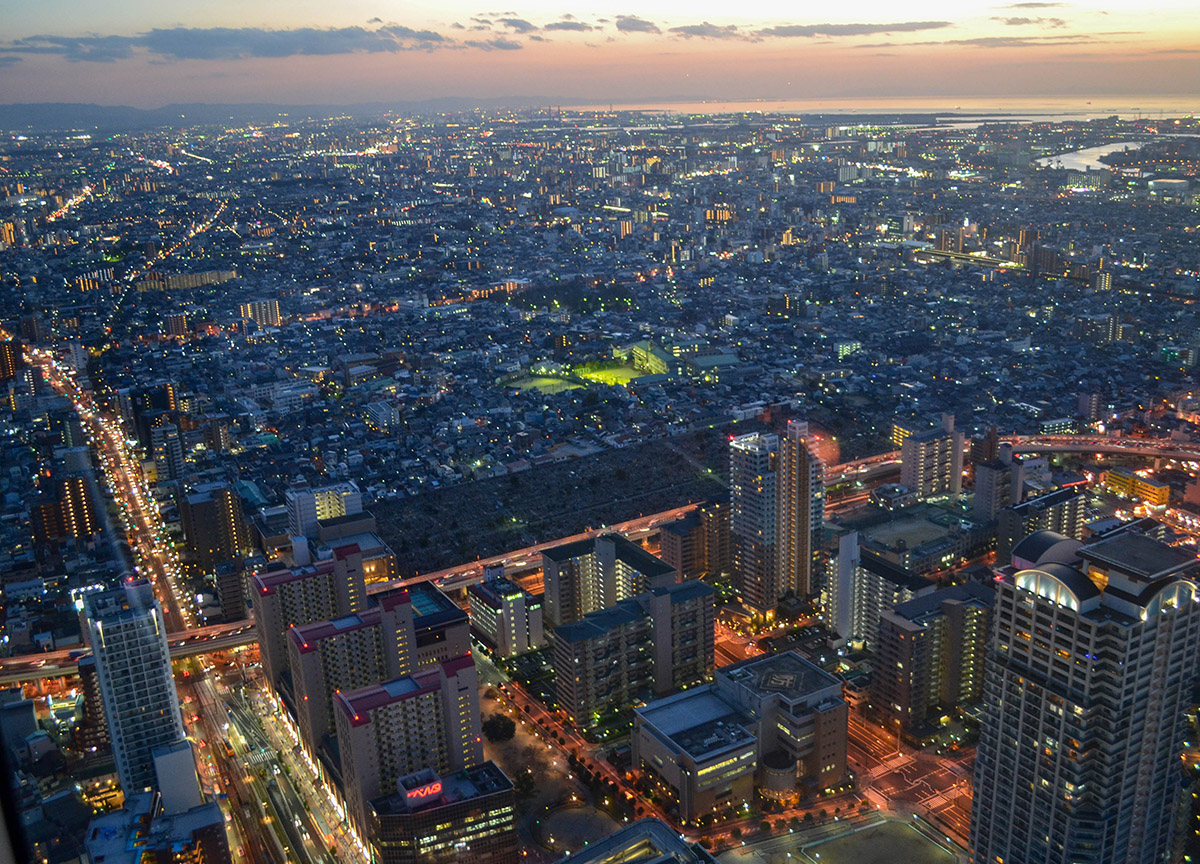 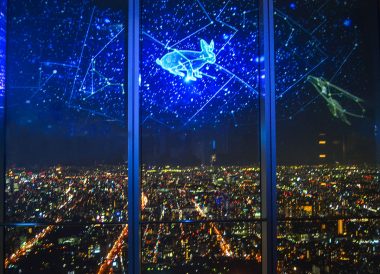 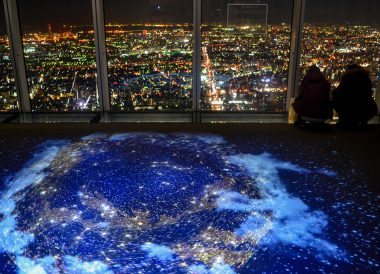 Osaka castle is one of Japan’s most famous landmarks, with lots of history and whatnot, so it is obviously one of the main tourist attractions in Osaka. However I have only ever reached the base of the castle (in two visit), and have yet to go inside. Otherwise we were sidetracked on our first visit during Golden Week, which is the longest public holiday in Japan, when the surrounding park comes to life in spring time. As Osaka Castle Park would likely be the best people watching place in all of Osaka, and in Japan you can expect all sorts of unique characters and intentional oddballs. It is also a hangout for the clichéd cliques and Japanese sub-cultures with punk band buskers, J-Pop and occasional cosplay, and there’s an expansive baseball field, as baseball is so popular in Japan that don’t really know Americans also consider it their ‘national sport’. So the best time of year to visit would have to during the Sakura Blooms (Cherry Blossoms) when every inch of shade beneath trees will quickly be taken as families and groups gather on blankets to cook noodles, drink beer and share picnic snacks. Check here for nearby hotels. 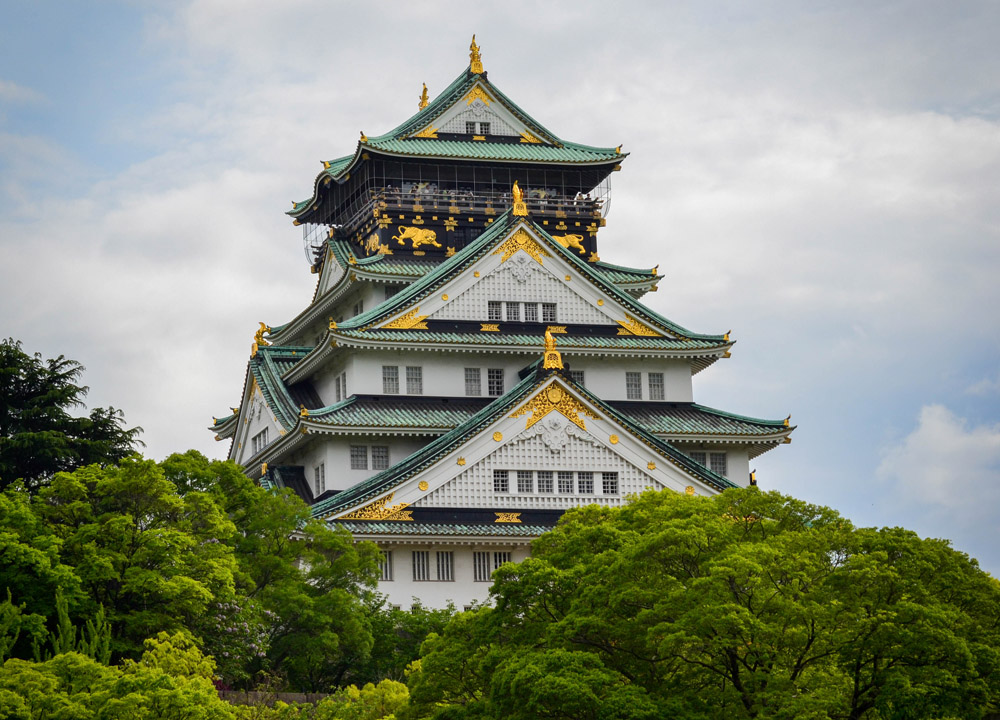 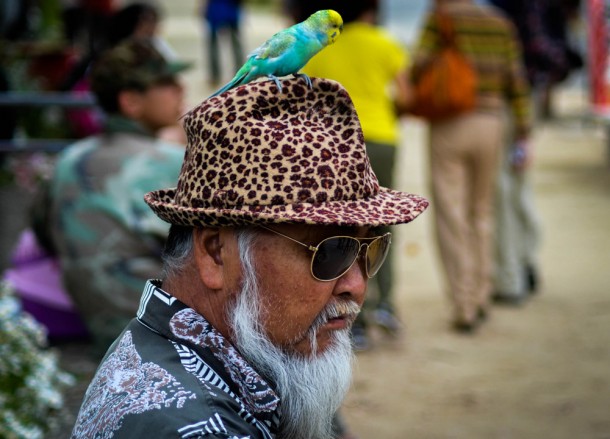 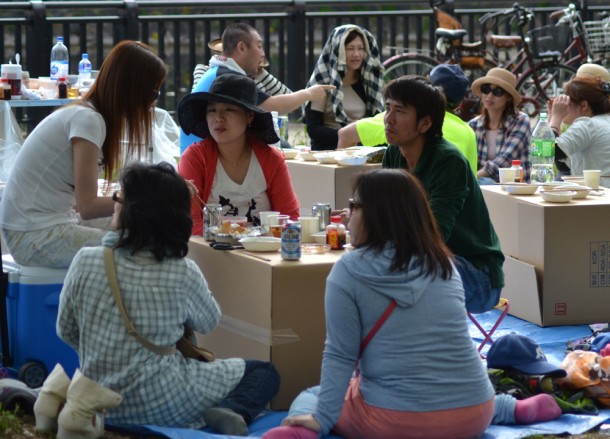 Temple enthusiasts should really make a trip up to Kyoto to explore temples, as it is just an hour away on the Shinkansen lines, and it is home to many of Japan’s most beautiful and revered Shinto temples and shrines. Otherwise Osaka is more of a food and flashing light type city. But there will of course be various temples to explore throughout Osaka, and this includes the better known Shitennoji Temple, although we haven’t quite made it ourselves. So to date the most prominent temple we have visited in Osaka, is Sumiyoshi Taisha, which was part of a wider photoshoot in traditional dress in Osaka, and the main draw here for us was the lack of tourists, because Kyoto is otherwise ridiculously busy and touristy at its main temple compounds. So while temples may not be the main tourist attractions in Osaka, I do find the temples to be quieter, and more serene, and ultimately more enjoyable. 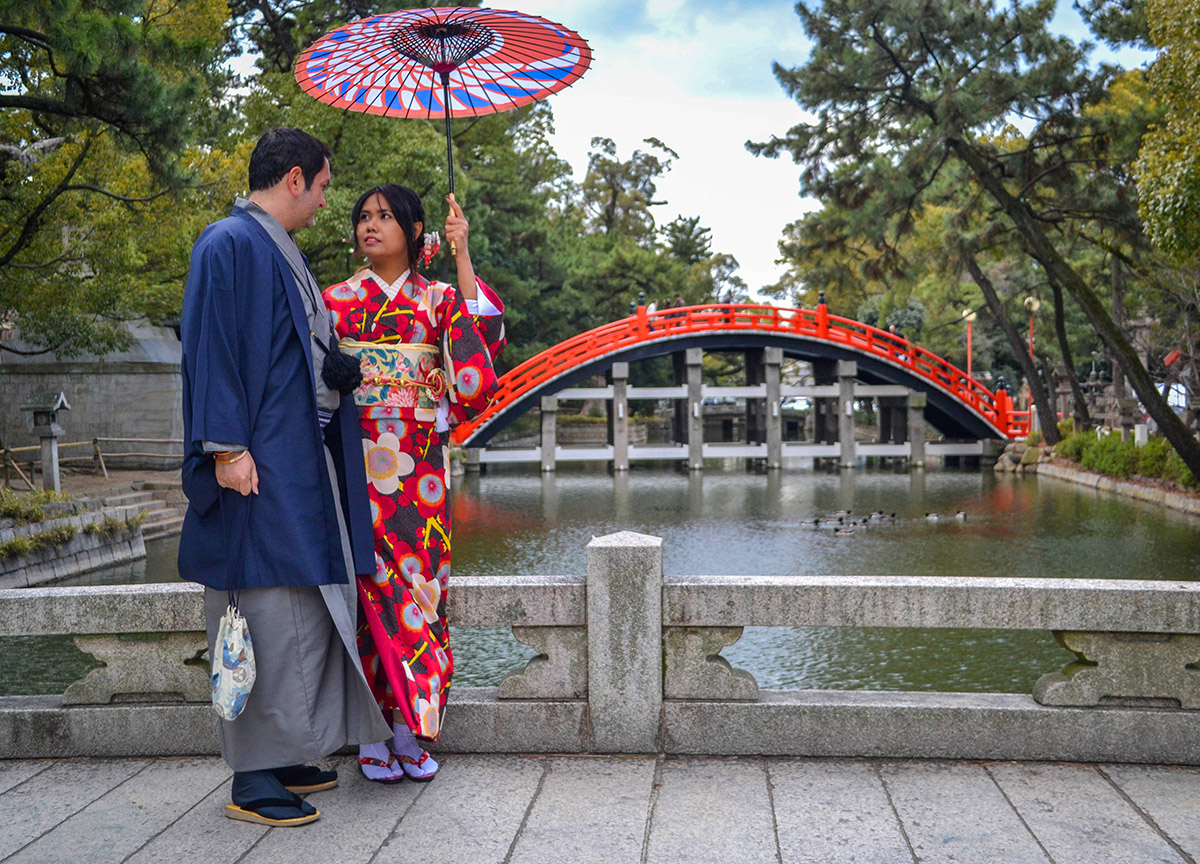 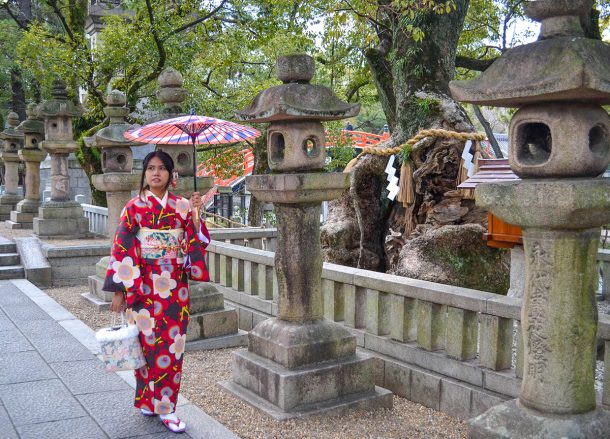 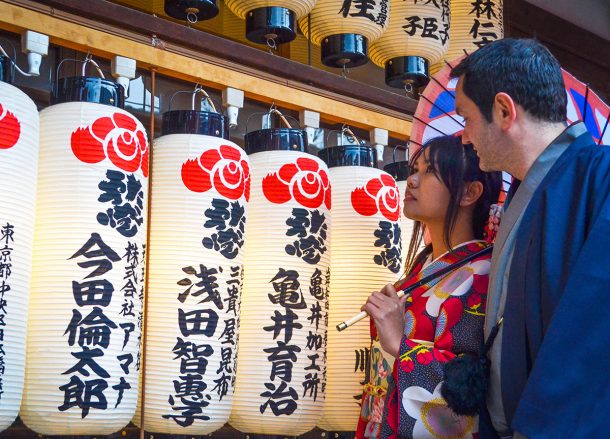