Our stay at Ulu Ulu Resort, in Temburong National Park, threw us far out from our usual comfort zone, as part of a wider project for Fanfan to face her fears in Brunei’s deep Bornean rainforests. And it has taken us a while to share the resort experience, but it is no doubt one of the most memorable stays of the years, hence we are coming back to it now. As it was an experience that just needs to be shared. So we spent two nights and three days at the Ulu Ulu Resort, and while it is possible to experience Temburong National Park on a quick day trip from Brunei’s capital Bandar Seri Begawan, I would forever recommend at least one night at Ulu Ulu Resort (packages shown here) and adding it into your Asia vacation plans. But this is not so much for the night-time experience in the rainforests, but because it’s just a really long journey to get there in the first place. And it would be wasted to rush in and out again. So our own visit followed a four-hour journey in minivans, speedboats and longboats, before reaching our final destination, in the dense primary rainforests of Brunei, at the Ulu Ulu Resort.

Our journey started with hotel pickup, at the rather extravagant Empire Hotel, where we stayed on the beaches of Brunei. From here we are then shuttled to the pier, along with our Ulu Ulu Resort guide, who will remain with us throughout the coming days in the rainforests. The first port of call is then the pier at Bandar Seri Begawan, found opposite the Kampong Ayer water village (the largest water village in the world), near the city centre. From there we then travel by public speed boat, which weaves through mangroves, and opens out into the Brunei Bay area, before cutting inwards toward the Ulu Temburong National Park. Along the way we pass crocodiles and monkeys, and no doubt much more wildlife, before arriving at an inland pier where again we are bundled into another minibus. After a short snackstop at a local market, we finally arrive to Temburong River, where we take a long-boat along a dense rainforest riverways before pulling up on a stony bank. This is where we finally find our new base for the coming days, at Ulu Ulu Resort which translates from Malay as “Far, Far Away”. As this is very much where we are. Far far away from anything. 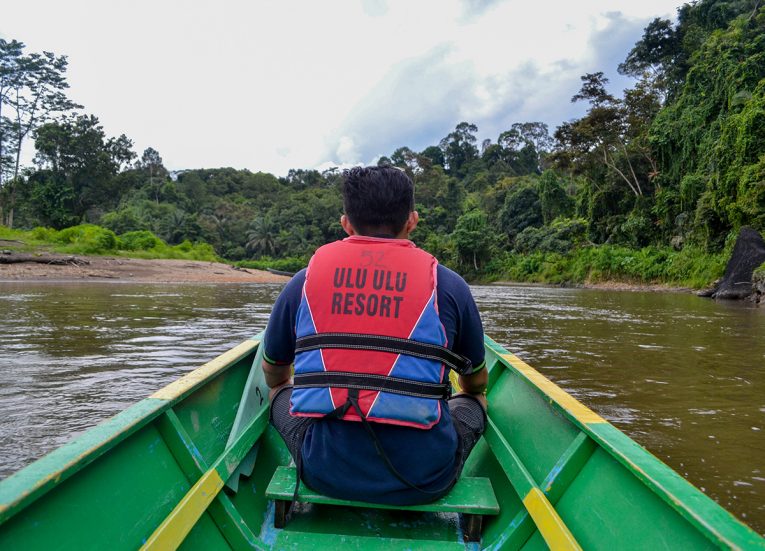 The main attraction of the stay is the Canopy Walk, which admittedly takes a level of fitness that we’re not used to (our fitness is abysmal at best). But the guide, who does look concerned, tells us that both a seventy-year-old man and a three-year-old child had reached the top in the previous month. So we’d look ridiculous to walk away. Anyway, the trek to the Canopy Walk begins at 05:00 AM, where we clamber through dense rainforests, in pitch black darkness. Which is a tad terrifying, but after an hour of stopping and starting, and occasional dry heaving, we finally arrive to the bottom rungs of the towering metal scaffolding which holds the ladders to the Canopy Walk. “Last month a girl started crying at this point”. Haha. This we didn’t understand, as we had undoubtedly passed the hard part, and now the sun was rising, and our fears had been left behind in the rainforest. And while the height is a little terrifying, and the scaffolding does sway a bit due to its height, but the relief of reaching the top is outdone only by the sheer magnificence of the views up above. The same goes for the sounds where we are surrounded by a deafening siren of nature’s morning call (listen to the video above at 2:40 – 3:20). But this does not do justice to the experience, and outside of Japan (we’re obsessed with Japan), I’d say this was the most fascinating and memorable experience of our past years in travel. It’s no doubt worth the trip alone. We would also half-heartedly join a bunch of excursions through, where we are given a list of potential activities which include trekking and kayaking, which sound Meh. So instead we go with the Night Jungle Walk, which we anticipated as being terrifying given the rainforests are much more active and alive at night, but the safety warnings had us somewhat regretting our decision. “If a snake puts its head up to attack? Just walk away slowly”. “If crocodiles are nearby? We go straight back to the boat”. “Do not scream. This can upset the animals, and make them defensive or aggressive”, “Tarantulas are harmless… well, they shouldn’t jump at you”. But it’s all-inclusive, so we find no harm in braving at least the beginning of the tour. And after a short longboat ride we arrive to the starting point of the Jungle Walk, where we would follow a shallow stream past nests, holes and lairs, of snakes, spiders and lots of other jungle beasts. But this is as far as we get, before frantic splashing surrounds the 2-foot tall longboat, as the guide apparently and accidentally poked a crocodile with his stick. So we had no option but to return. And while I was somewhat disheartened, the situation also highlights the unpredictability and hit-and-miss nature of eco-tourism. But we do return the next day, during daylight to follow the same path, to find the usual critters returned to their holes. At least we spot the tarantula peeking out. Then we finally arrive at the end of the trail to find a waterfall teaming with Garra Rufa fish, which are like those fish-pedicures at fish spas, which nibble at our feet. We really aren’t the most adventurous of travellers, and while we do occasionally explore some far-flung destinations, our plans when there are to do little more than eat, and enjoy the scenery. So we may not make the most of the resort’s excursions in the end (as I don’t think the Canopy Walk can be topped anyway) but I am otherwise happy to just explore the surrounding scenery, which feels somewhat prehistoric. Because Brunei is home to many of the region’s last unspoilt primary rainforests, as surrounding Borneo and Malaysia have lost most of theirs to an obsessive need for logging and agriculture. Meanwhile, Brunei has made its own fortune and riches in oil so it has no reason to chop down trees. Anyway, I am happy just to indulge, and as a bit of a bird nerd I spend much of my time chasing the local Hornbills, which are ridiculously big and noisy, yet elusive to my lens. And I was honestly a bit gutted to leave without seeing them. But I did spot a whole load of other birds, including the Stork Billed Kingfisher, Scarlet Minivets, Black-Winged Flycatcher Shrikes, Green Ioras, and Greater Leafbirds. Along with many more that I couldn’t identify. Also, another well-known feature of these forests is the bright yellow Simpor flowers, which are in fact Brunei ‘s national flower. Independent travel is pretty much impossible in these parts of the world, and it would have been extremely dangerous at one time, given we are in headhunter territory. Which is home to the infamous Iban Tribes of Borneo (Dayak people) who lobbed off the heads of enemies, to keep as trophies. But now they have turned their backs on these rather gruesome traditions, in favour of more amicable pursuits in tourism, and the local Dayak folk prepare the food at Ulu Ulu Resort, and man the boats, and are just generally around to be warm and welcoming. A nice bunch. So we do spend much of our time at the resort, as we can’t exactly trot off to the local pub, or nearest mall. Because there’s nothing for many miles. Although it is just so relaxing along the banks of the passing river. The restaurant food is also fantastic, where we eat at set meal times, which are all-inclusive in the package. The meals as well are all organic, sourced from the gardens of the resort, because it’s really not easy to bring in fresh ingredients each and every day. And, as food tourists, we did manage to join the cook one night, so Fanfan could learn their fantastically fiery sambal. Up Close with Nature

However, the entire purpose of this adventure was for Fanfan to overcome her fear of bugs and creepy crawlies. And there really is no place better to do it, as you really are smack in the middle of nature, surrounded by all sorts of wildlife, bugs and nasties in the rainforests. Although we never met any inside our room. But anywhere outside of the bedroom walls is their territory, and I remember opening the doors on the first night, to see bats darting from light to light along the wooden corridor, coming directly towards me, at head height. And throughout we were just wary of our surroundings, which goes more so in the rainforests, where on our first excursion to the Canopy Walk we are told it’s best not to use the handrail because there may be spiders or snakes on them. “You’re joking, right?” So the guide shines his torch along the wooden rails, and looks around a bit, to finds a venomous huntsman spider (below left) waiting on the lower post. “Be careful you’re standing in fire ants”. It really is an exciting place to be.